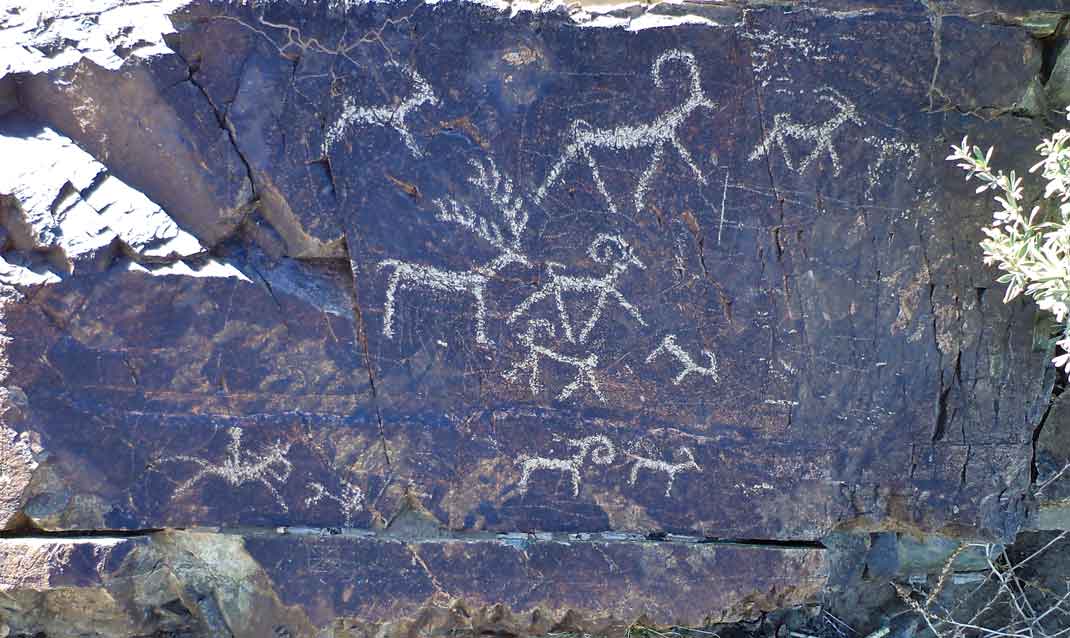 In all my outings in Mongolia, I never saw a wolf – I only heard them howling while camping out one night (you can read about that here). Wolves, so I was told, are not a danger to humans – mostly. They are smart enough to avoid trouble, but a hungry wolf is a different story. But for Mongolian herders, looking after their sheep and goats, they are a problem. I was shown mobile phone images where a wolf had been tracked down in the mountains – and nailed with a rifle. This seems to be their fate where farming interests overlap.

What I did see were engravings – ancient petroglyphs, sometimes involving wolves. Petroglyphs are images that have been pecked by hammering onto a smooth rock surface. In Mongolia many of these date back to the Bronze Age, although ‘Buddhist’ script and ‘Turkic runes’ are more recent. By far the most common petroglyphs are of what I take to be Ibex. They have distinctive, highly-curved horns, sometimes with prominent ridges along their edge. Petroglyph ‘panels’ could include several images of ibex, or just a single one. If taken at face-value, they suggest ibex were once far more common than they are today (I had a fleeting glimpse of some).

Some petroglyphs include wolves – their low bodies, long snouts and tails are unmistakable. In one image a lone wolf confronts an ibex, while in another, a wolf pack has slunk in among a herd of ibex.

Mongolian petroglyph of a wolf confronting an ibex.

A wolf pack in among a flock of ibex.

Wolves weren’t the only thing ibex had to put up with – there were of course, human hunters. One image I came across shows a single human with a reverse bow, a dead ibex at his or her feet and about to shoot another. Humans, no-doubt, account for why there are few ibex left in Mongolia today. Far up in a mountain one day, I was taking a careful look at rocks – and hidden under one, was a single engraving of an ibex. It surprised me – as there was no sign of any others. Was this the product of a tired hunter, the spot where he or she sat down, and took time out to draw the prey? Or perhaps it was from a bored herder?

As well as ibex and wolves, there are petroglyphs of some sort of deer. Their images show branched antlers (wapiti perhaps?), and are drawn very differently from the famous Mongolian ‘deer stones’ which I also saw. These later have been interpreted as ‘flying reindeer’. I saw neither – chalk up their petroglyphs as extra evidence of a more biodiverse past (though I suspect the reindeer, flying or otherwise, were a cultural thing, rather than animals that lived in the neighbourhood).

One of my favourite Mongolian petroglyphs -a deer.

Large animals are still common in parts Mongolia – we often came across herds of horses, or Bactrian camels, but it’s debatable how ‘wild’ they are. It’s likely, they all belong to someone. On the open plains we sometimes encountered herds of the timid and weird-looking Saiga antelope. These seem to be some of the last, truly wild large mammals. Small mammals, such as marmots and gerbils, can be common, even foxes from time to time. But few of these seem to have been ‘charismatic’ enough to have been immortalised in petroglyphs (I did find some camel images).

The ibex, deer and wolf petroglyphs along with the highly relictual distribution of forests or lonely, isolated trees today, are all evidence that Mongolia had a very different past. I guess there was more vegetation, better soils, probably streams that that didn’t just flow as flash-floods, and with humans only armed with bows and arrows – more ibex and more wolves.

One day I left my driver up on a plateau and spent hours by myself, threading my way through the canyons of some ‘badlands’ below. When I eventually got back to the vehicle my driver said that from his vantage point, he could occasionally see me coming and going from view – but also the wolf that was quietly following me. So I never saw one, but a wolf certainly saw me. Hungry wolf?

If you make it to Mongolia (and you should) a guide can take you to some of these petroglyphs. I can recommend  OffRoadMongolia, run by husband and wife team Nyamka and Baigalmaa. For the next couple of years, Baigalmaa is on the most extraordinary adventure – walking with several companions from Ulaan Baattar to London with a group of camels. But in the meantime, Nyamka will look after you! And perhaps you’ll meet the wolves.