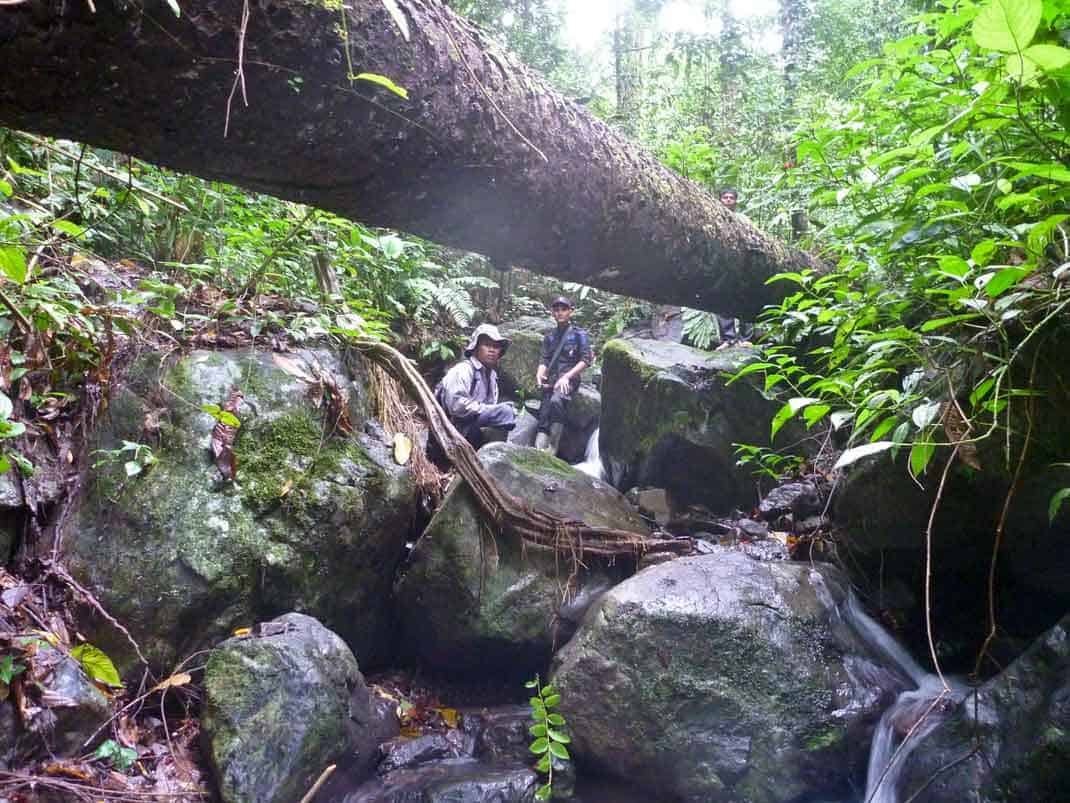 Our Indonesian guide, with a parang (machete) in hand, dropped vertically in front of me, just brushing my face, while out of my peripheral vision I saw someone cartwheeling down through the trees. Then, within about two seconds, six people had vanished. I was alone in the forest.

We were geologists, daily exploring the forested mountains of Aceh, north-western Sumatra, Indonesia. We were a mixed bunch. At various times, Filipinos, Mongolians, Australians, a Russian, and a New Zealander, and Indonesians from various parts of the country.

The ex-pats would usually fly in from Medan, to the nearest airport at Blang Pidie. The flight went up and over rugged, forested mountains. From the back of the little plane, you could see the pilot’s GPS screen – showing the diminishing blocks of colour indicating the topography that was higher than us, If the skies were clear, we could see Lake Toba far in the distance. If it was cloudy, and we were in those clouds, it was a little tense. The airline that flew us across Sumatra lost four planes, with all on board, in crashes that year.

The view from my hotel in Tapak Tuan, Aceh, Indonesia. A few years before, a tsunami came from out there.

From the airport, it was a further 70 km or so to the town of Tapak Tuan, where our office was, and the hotel overlooking the sea, where I stayed. Up until the 2004 tsunami, this stretch of road, so I was told, was a no-go area for the Indonesian Army -an ambush was guaranteed. But a few years on, the land, and perhaps the politics, had healed. Like most Indonesians, the Aceh locals, are basically happy, friendly people.

Each morning we would grab our lunch pack and pile into the vehicles. For forty-five minutes or so, the road wound over ridges or passed close to the Indian Ocean – edging a narrow and densely farmed lowland. With rocky break-waters, the people here are fighting what will eventually be a lost battle to keep that ocean from overwhelming their land.

But our work was in the highlands, and always in the territory of a particular village. To explore their turf, we had to arrange local guides before we came. Once we got to the right village we would meet our guides, then troop across the rice paddies to the forest at the edge of the mountains. The usual plan was too walk up a stream then come down another. Ridge lines separating drainages were sometimes the borders with other villages, so it wasn’t always possible to change our plans.

In the rainforests, streams are typically one of the few places where rock crops out. The rocks were a mostly a mix of limestone and volcanics, but now and then we found metal ore. Deep under the forest canopy, in the dark and wet, it could be tough to tell what kind of rock you were looking at. I would belt off a piece with my hammer, squint, try and find a shaft of light, and struggle to look under my hand-lens, without shading it.

Making our way up a stream in Aceh, Indonesia.

In the rainforest it was always hot and humid and as a bonus, it could seem like everything was out to get you – from the tigers on down. Tigers? Did I say tigers? They were there. The helping hand of a guide once hauled me up out of a ravine – and he pointed to the ground a foot in front of my face. The track told him a tiger had been here 20 minutes before. Another time, just to make the point, one of the guys in the office had thrust his mobile in front of me. After a second of squinting, I realised what I was looking at – a video of a disemboweled corpse on a slab, with a huge chunk missing from his thigh, followed by footage of the captured culprit in a cage, being given water. It was filmed at a village not far away. Tigers don’t normally attack humans in the middle of the day. But then, sometimes they do.

Claw marks on a tree trunk.

I quickly learned not to blindly grab the nearest small tree whenever I slipped. It was good to try and get a fraction of a second’s glance first. Chances were, what I grabbed was either going to sting, poison or impale me. To counter all this, I wore trousers, long-sleeved shirt, hat, gloves, and sometimes safety glasses (a right pain, as they fogged up). But this didn’t leave much exposed skin to shed body heat!

Don’t grab either of these plants!

Most farming in our area was on the flat lowlands along the coast, but a few pioneering souls had pushed up into the hills, carving their patch out of the forest. There they cultivated rice on slopes so steep you’d go for a tumble if you slipped. And that, of course, accounted for the tigers. As humans expanded into virgin territory, tiger habitat was destroyed, the tigers were displaced, and their normal human-avoiding behaviour changed. Our company was interested in drilling in steep country a long way inland – in what was technically a national park. This sounds shocking, but the reality on the ground was that all the rainforest had been removed, and was being farmed.

Around mid-day we would find a clearing to stop in, or some big boulders along the stream. Each of us would unwrap our banana leaf ‘lunch box’ and mix the small amount of fish and sambal with the mass of rice. After a short break, we’d head on, move over and down another stream, and then negotiate the rice padis back to our vehicles.

Every day we returned home wet, soaked from sweat, wading up streams, being caught in tropical downpours, and frequently because of all three. Back in the hotel, I had my routine. In my bathroom, there was just a cistern of (very) cold water. But I had scored an electric kettle. My formula was one kettle of boiling water to a bucket of cold water, and then tip this slowly over me. If you’ve never done this in a similar situation – where a tough day’s work ends in fairly basic conditions, then you won’t appreciate how good it feels. That one bucket of warm water, slowly poured onto the top of my head, was virtually a religious experience. Pure bliss. Then I would rinse my sweaty clothes in a bucket of cold water, hang them over the plastic chair that sat out on the balcony, and head over to the office. We ate our dinners there, and would spend the evenings sorting our GPS data and notes.

A special sea-fish dinner at our office.

Late in the evening I would head back home, and hit the sack. Each morning I would get up, turn the kettle on, go back to bed for a few extra minutes until it boiled, then repeat the bucket of warm water bliss. My room was on the upper level of the two story hotel. To exit, I walked out to the balcony overlooking the main street. From there I had a perfect view along typical small-town rush-hour – and the motorbikes. Everyone on motorbikes. One person, two, sometimes three. And they would all spot me, the foreigner, up above them. Every morning and then, a bike load of bi-hijabed Indonesian schoolgirls might see me and whoop “Bule! Bule!” (Foreigner!) It was a great position to confirm a national trait: Indonesians love their motorbikes. If it’s possible to ride them somewhere rather than walk, they do. I’m sure some of them spend their whole life cycle on their motorbikes (and yet amazingly stay trim). British explorer Tom Harrisson confirmed that signs of this general aversion to walking go back a long way. In 1949 he published an account of travelling in Borneo. He noted (p. 140):

“Hillmen would rather walk; the river people are generally reluctant to walk at all”, and then recounted a tale where he and a group of locals had traveled for 12 days in a canoe, with barely any food. They were then stopped by a flood, but he figured that a bit of walking would get them to a village. All but one of his companions refused. The two of them walked and reached the village that afternoon – and ate well for three days, until the, by now, half starved canoe crew arrived.

Rice padis in the lowlands, and the country we explored in the background.

Which brings me back to that scenario in the forest. That day in Indonesia, we had moved up a stream until we encountered a waterfall. We couldn’t negotiate up it (too dangerous), so decided to struggle up the near-cliff just before it. This was when the commotion happened. Six people were there one second, then just me the next. Now I’m reasonable jungle-savvy. In Australia, when I took my students in to the bush, I was familiar with one rule: It’s the first person in the line that wakes the snake up, the second that irritates it and the third that gets bit. I was always happy to walk at the back of the line (: But there’s another rule, and it says that you don’t have to run faster than the crocodile, only faster than someone else.

That my comrades vanished in a flash was alarming enough, but some of them were part of a culture that’s not much into walking, let alone sub ten second 100 m sprints.

Terrified, I fled down the gully. I had no idea what I was running from, or how close it was behind me. I ran until I met the group – doubled over, gasping for air and laughing at the same time. What the?

Well, in Indonesia there are tigers, snakes, spiny and poisonous plants, but trust me, what you don’t want are pissed off Indonesian wasps.

Turns out that someone up above me in that ravine had gone straight into a wasps nest.