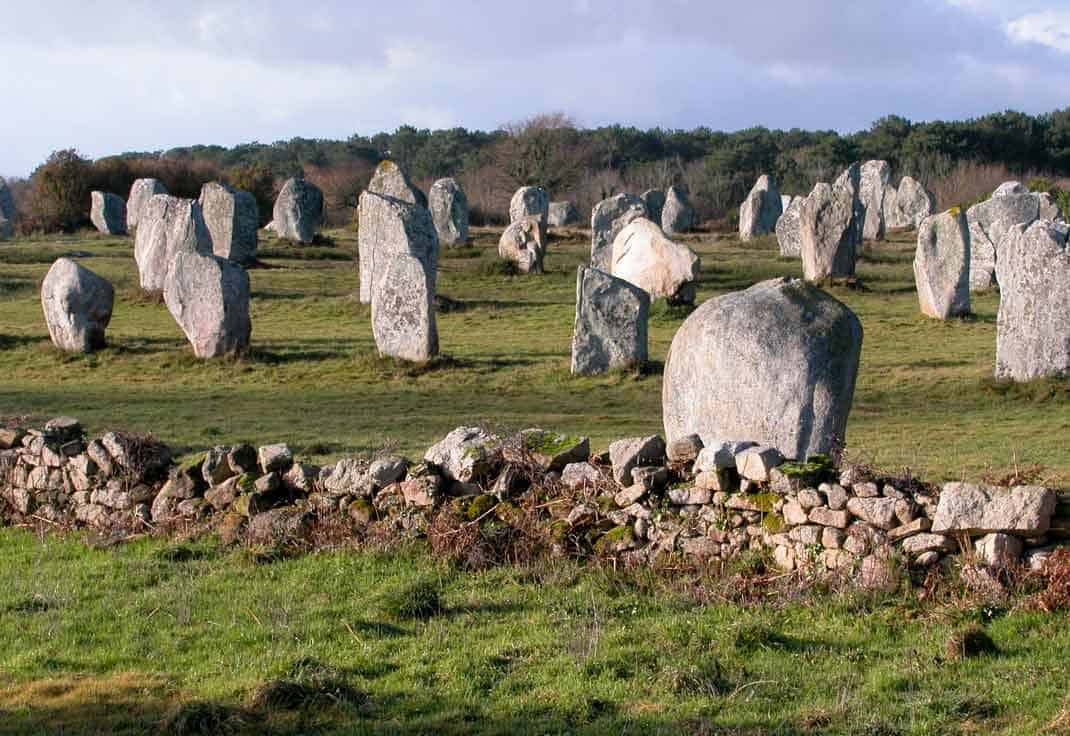 The French woman had parted the curtains, and was peering out into the stormy night.

There are up-sides and down-sides to travelling in the European winter – there are, of course, less tourists, but to compensate for this, the locals tend to shut up shop. I’d arrived in Carnac, the little town in the French Morbihan (‘Moor-be-yon’) region of Brittany. From Paris I had taken trains to the west – Rennes, Vannes, Auray. But once in Carnac, about 4 hours later, I just started wandering around, looking for a place to stay. Place after place was closed, I really hadn’t expected that. I was getting a bit despondent by the time I happily stumbled on ‘An Ti Gwenn’ (the ‘White House’), a traditional stone house, and run by a pleasant French woman.

‘An Ti Gwenn’ (the ‘White House’) in Carnac, Brittany, France.

But Brittany in winter? Actually, there is an up-side. Carnac is home to one of the most stunning prehistoric sites in Europe. There are rows and rows of standing stones – megaliths. They form a column like an army on the match. In summer, access is restricted, but in winter, you are free to roam the stones – and I did so.  It was cold, but the sun was shining and I had the place entirely to my self. There are three ‘alignments’ of stones, with one of them alone having ten rows, with 1029 stones, up to 4 m high, stretching for about 1,300 m. They were erected around 3300 BC, early in the Neolithic.

The Carnac megalith site is discussed in the book ‘The Memory Code’ by Lynne Kelly. When I first came across a reference to Kelly’s book, my first thought was “New-age, self-help’. How could a sub-title that says “The traditional Aboriginal memory technique that unlocks the secrets of Stonehenge, Easter Island and ancient monuments the world over” do otherwise?

But I added The Memory Code to my wish-list, circled it warily, gradually homing-in, before finally buying. Kelly is a bona-fide researcher and science-writer, not New-age at all. Hell, I’m probably more ‘woo’ than she is. Beginning with her PhD, Kelly has built on a body of knowledge which considers how oral societies (ones which have no writing) pass on their culture’s accumulation of knowledge, generation to generation. It’s hard, perhaps impossible for us, who get most of our information from books, the internet, or watching 211 hours of TV a month, to imagine a world where everything is word of mouth. This is not trivial – societies accumulate a vast amount of knowledge in order to function, and in oral societies there is only one place to store it – the human brain. Kelly’s particular angle is in how to spot the memory systems these oral societies in the archaeological record.

Map of the Bay of Quiberon area or the Morbihan, Brittany, France, showing the route between Carnac and Locmariaquer.

Let’s imagine the time before Carnac was constructed. Pre-farming Brittany was covered in forest (Joly and Visset 2009) and egalitarian bands roamed their territories in search of seasonal food supplies. These may not have been huge areas, in fact, for the late Mesolithic of Brittany, there is evidence of distinctly small ranges (Dupont et al. 2009), perhaps because of the heterogenous coastal habitat. But for earlier (Paleolithic) times, when Europeans hunted reindeer and other large animals across a more open landscape, the territory was likely considerable. Eurasia was probably criss-crossed by songlines in the same way that Australia is today.

Throughout the year, the Brittany folk probably wandered a fairly defined sequence through their country. As they walked their trails, particular landscape features; hills, prominent rocks, bays, islands, would have been used by the elders as places to teach some aspect of their knowledge to the younger generation. This would have included the  names and habits of the various animals, plants and insects in their territory, their ancestors, their history, the boundary of their land. But there is only a certain amount of information a human brain can recall – without recourse to a structured mnemonic system. Oral societies use regular travel through the landscape, with an orderly series of locations, as a central part of such a memory system. At each location, stories were told to song and dance, another technique to aid memory, and perhaps quite literally, ‘drum’ information into young people’s heads. The orderly sequence of locations that the people walked were their ‘songlines’.

The standing stones of Carnac in the mist.

But then farming came – and society became more sedentary, with people fixed to one place. However, there was still a need for a huge amount of knowledge to be passed on. Some, of course, was entirely new knowledge – like the best times to plant seeds. Kelly argues that without the natural mnemonic of travelling through an orderly progression of landscape features – artificial ones had to be created. This is where megalithic sites like Carnac come in. Around the world, these structures always date to the transition between relatively mobile hunter-gatherers and sedentary farmers. The arranged stones (and often associated wooden posts), take the place of the chain of landscape features. They become artificial songlines.

Typically the rocks in megalithic sites are undressed – they are either as they were found – naturally weathered, or hewn roughly from solid rock. As memory devices, I keep expecting them to be carved with some sort of symbols, totem-pole-like, but this is probably my hopelessly literate mind speaking. Kelly draws the analogy with the central Australian rock massif of Uluru. Many prominent natural features of this huge rock had some meaning to the Anangu people – the perimeter of Uluru is basically a songline*. In the same way, the natural features of each raised rock in a megalithic site, became small Ulurus. Each rock can hardly help but have a unique shape, but the megalithic people sometimes used other methods to emphasise the individuality of the standing stones – like selecting rock types that were only found in different parts of their territory, then laboriously dragging them to the site.

The Carnac stones may therefore be artificial songlines . But multiple rows? Kelly speculated that the rows of stones in Carnac could have allowed several groups to be studying different sections of these songlines simultaneously.

Yours Truly at Carnac.

The next morning Carnac was misty. I had another look around the rows of standing stones then set off towards the Peninsula of Locmariquer. In a straight line, it was over nine km to the east along a small, but busy road. The Bay of Quiberon was off to my right, but the landscape has changed since the megalith days. Sea level has risen. Carnac was amazing, but Locmariquer had something else – the Grand Menhir Brisé. Archaeologist Chris Scarre has written that the erection of this massive stone, could be considered “the greatest project ever undertaken in West European prehistory” (quoted in The Memory Code).

When I reached Locmariquer I saw the great stone – the 21 m of it, cut from solid rock, and dragged several kilometers to the site,  now lies broken, in four pieces. But even those fragments emphasised the critical point – the massive effort that went into making these structures. People don’t do that if there is no important reason. It was not a hierarchical society with a few important and powerful people compelling others to labour. These people went to this effort because they felt a mutual need to. For Kelly, constructing these artificial songlines was because the most important thing in the prehistoric society was information – and the ability to store it and pass it on.

By now Locmariquer was almost dark, the weather had deteriorated, and the rain turned to sleet – and I still had that nine km and more to get home. Winter travel in Europe? Yes, there are down-sides.

I plodded off down the road back towards Carnac, trying to avoid being sprayed by passing traffic. It was well after dark that I turned into the driveway, to spot the maîtresse of ‘An Ti Gwenn’ peering out into the storm from behind the curtains. Where was that odd guest so late on an inclement night? The material quickly fell back, and she welcomed me at the door. I’m sure she quite understood my long day’s enthusiasm – it would have been in her genes. Her grandfather was the Carnac archaeologist in the 19th century.

The maîtresse of ‘An Ti Gwenn’ standing in front of an image of her archaeologist grandfather at work.

*Note: I don’t know if the perimeter of Uluru is a recognised songline.  A I understand it, Aboriginal songlines trace the paths that ancestral figures made in the Dreaming, they are not simply trails that modern people wander through their territory.

Joly, C., Visset, L., 2009. Evolution of vegetation landscapes since the Late Mesolithic on the French West Atlantic coast. Review of Palaeobotany and Palynology 154, 124–179.