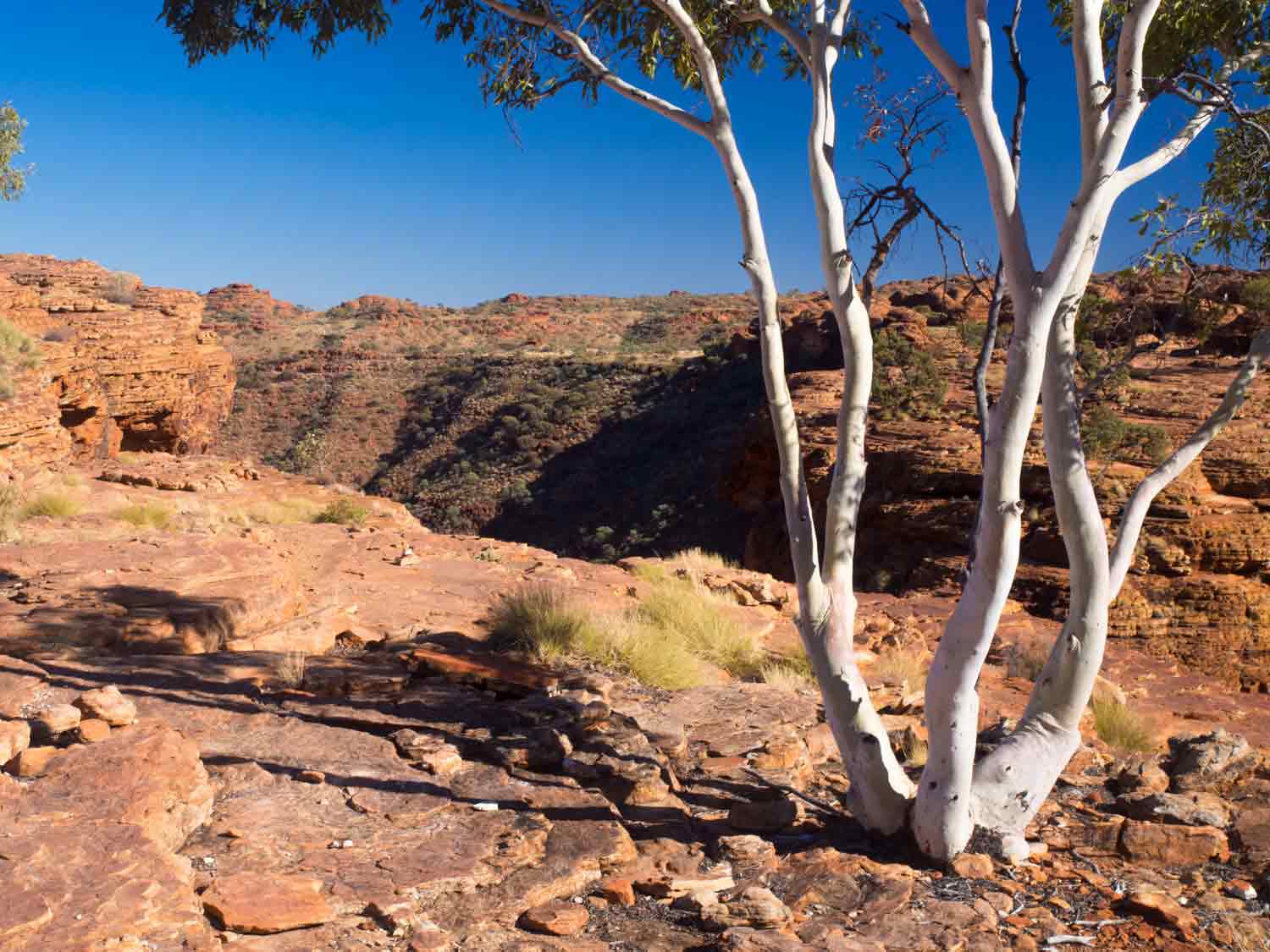 A camp-fire, such a simple pleasure, second-nature to a lot of us, and yet a whole new experience for some people. Our Emu Run tour arrived in their private camp site near Kings Canyon, Watarrka National Park, towards sunset. We had driven from Uluru for hours along dead-straight roads, flanked on either side by a dense canopy of low vegetation. The camp was a collection of canvas huts and a kitchen/dining room, enclosing an open area with a fire place (a little further off was a very welcome shower block).

Our leaders offered a simple deal– if we could find fire wood, we could have a camp fire. So in the fading light I headed out into the surrounding scrub. I was quickly joined by a young Chinese chap – a student in Australia, and his partner who had come over to visit him. They wanted to help find wood. They had never sat around an open fire before, let alone collected wood from the wilds. I showed them where to get some big bits of dead wood, ones that would burn long, and together we dragged a pile back to camp. As dark fell, the student got the fire going, and the whole tour group, 12 of us plus our guide and caterer, gathered around it. We chatted for hours, drank wine, occasionally looking past the fire and into the shadows for marauding dingos. It was nice to see foreign visitors getting an extra special experience to take home. They’ll have their standard photos of Uluru and the Olgas of course, but somehow I think their first experience of sitting around a fire under the stars of central Australia will be an extra special one

The next morning, pre-dawn, we set off to walk the canyon. Kings Canyon was the third destination of the three-day Emu Run tour. I’d gone on it as the most economical way to see Uluru and the Olgas. Kings Canyon was off my radar – I’d vaguely thought that it was one of the spots in central Australia that has palm trees, but was happy to see whatever it had to offer.

The canyon is cut into the side of a plateau – the flat surface which then extends over a huge part of central Australia. The path up the edge of the canyon and onto the plateau walk up is steep – it’s formed of steps of what geologists call the Mereenie Sandstone. This was laid down, very roughly, around 420 million years old. Life in the Earth’s oceans was well developed at this time, but most of the land surface would have been devoid of plants and animals. Without much in the way of soil-forming processes, and plant roots to hold everything together, floods would have swept vast quantities of sand into rivers, oceans or desert plains, to eventually turn into just the kind of thick sandstone we were labouring up.

‘Fossil’ ripples marks on the surface of Mereenie Sandstone, Kings Canyon. central Australia. These will have formed in shallow water.

On the way up I was immediately fascinated with the variety of features visible in the sandstone – what geologists call ‘cross bedding’ and ripples. These were formed when the sandstone was sediment. The kind of ripples I saw form at the bottom of shallow bodies of water, in response to wind blowing over it. Some of the cross bedding appeared to be bars, bodies of sandstone that make their way down the beds of rivers in response to the current. Other bedding was probably dunes – another sandy feature of river beds.

A mix of cross beds and horizontal Mereenie Sandstone beds at Kings Canyon, central Australia. To my mind these were deposited in water.

Our guide, Matti, knew the canyon intimately. She also knew I was a palaeontologist, and was keen to show me some fossils which she had spotted higher up on the plateau. But somewhere along the track she mentioned “desert sand dunes”. The source of this soon appeared – an interpretative sign describing the Mereenie Sandstone as “originally sand dunes” and that central Australia at the time was “a windswept plain covered in sand dunes”.

The park sign puzzled me, as most of what I had seen on the walk up was clearly water laid. This is obvious from the thin beds, the wave ripples, and from at least some of the cross-bedding. However, it’s always good to get challenged on interpretation. Once you have an idea in your head, further observations can be unconsciously twisted to support your views. I’m at least as bad as the next person on that one. Some wind-blown sand may have been in among the water-lain beds. That would be quite normal for a river passing through a desert, or for coastal sand dunes. A few small wind blown dunes could be easily overlooked in a lot of river-bed dunes. However, high up above Kings Canyon there are some very large cross beds, and these might well be wind-blown dunes –  but they are a small component among the other sandy beds.

Our guide Matti, in front of some very large cross beds of Mereenie Sandstone, Kings Canyon, central Australia, which may have formed as wind blown dunes.

Matti pointed out a range of fossils she had spotted, There were wormy trails, and curious round marks, like what’s left on your shower wall once the suction cups holding the shelf with the all the shampoo have come off. Then two parallel rows of dots – so regular that it looked like someone with a chisel had tapped them in.

Parallel rows of depressions in the surface of a sandstone bed (Mereenie Sandstone, Kings Canyon National Park, central Australia). These have been identified as the trace fossil Diplichnites gouldi (Gouramanis and McLoughin, 2016).

And then the weirdest one of all – a small, radial, star-shaped object. Despite the variety, these fossils were few and far between – isolated vestiges of ancient life in a mass of barren sandstone. All credit to her eagle-eyes. What exactly they were, was a mystery to me. But they indicated water-lain sediment, not desert dunes.

On the way down to the car park I kept an eye our for other features which would support a river origin: ‘lag horizons’. These are layers formed by lumps of mud or tree branches which have fallen down to the bottoms of rivers. They seemed absent, but were unlikely to have been here anyway, as this was before trees had appeared on Earth, and the river system seemed to have been all sand and no mud. One loose boulder did catch my eye. It had an obscure pattern across its surface, with a kind of regularity that doesn’t fit flakes of mud or bits of wood. They recalled a specimen on display at the Museum of Central Australia in Alice Springs and I suspect they might be what is left from a mass-death of ancient armoured fishes. These are already known from the Kings Canyon area.

Back in Brisbane I had the chance to Google a bit, and try and get to the bottom of Kings Canyon ‘dunes’. The first thing I found was that the very fossils we had seen had already been described by a couple of scientists (Gouramanis & McLoughlin, 2016), one being a fiend of mine. They are all ‘trace fossils’ – not the fossils of animals themselves, but tracks made by living creatures when the rock was soft sediment. Just like living plants and animals, scientists give Latin names to particular patterns of tracks when they find them as fossils. Gouramanis and McLoughin (2016) recognised that these tracks fitted track types which had already been recognised elsewhere in the world. The two parallel rows of pits were identified as Diplichnites gouldi – and were probably formed by a myriapod – a kind of multi-legged arthropod.

It turned out that the odd ‘radial’ fossil is the burrow of a creature which first dug straight down, but then probed out horizontally and sequentially from its central hole. As Gouramanis and McLoughlin (2016) put it, it is “interpreted to represent a central vertical or oblique burrow with a rosette of radial feeding traces on the bedding surface around the burrow mouth”. It’s exact affinities remain uncertain, but the authors noted another study (Collette et al. 2011) in which similar forms were related to the  feeding traces of some modern bivalves.

These Latin words are a convention that names pattern of the trace. They are not the name of the creature that formed the trails, which in many cases, remains unknown. To get some idea of what formed these trails, it is necessary to probe a little deeper.

But back to the desert sand dunes. An early report (Wells, et al., 1970) on the geology of the broader region claimed “abundant evidence of aeolian [wind-blown sand] activity” and cited “frosting and pitting” of the sand grains. However, it concluded that the original environment was “evidently complex, and probably included aeolian, deltaic, lacustrine, and shallow marine environments”.

A later report, specifically on the geology of Kings Canyon (Bagas 1988) summarised that “in the Kings Canyon area, the Mereenie Sandstone is predominantly a shallow-marine sequence”. But noted that in other areas, it passed up into mixed “aeolian-fluviual” (wind-blown dunes and river deposits).

Verdict? I suspect the park signs overstate wind-blown sand dunes a bit. They are probably there, but most of the sandstone layers seem to have been deposited in water, either on the bed of a river, or in shallow lakes. But given the general absence of land vegetation at the time – a “windswept plain” probably describes the bleak landscape perfectly well.

On that night in the Kings Canyon camp, the fire eventually burned all the wood we had collected. None of the threatened dingos had (yet) shown up and all the wine seemed to have been drunk. An option on this tour had been to sleep in ‘swags’. These are a kind of bed, like a big sleeping bag, but with room to move, that you can roll out pretty much anywhere, and sleep under the stars.

I’d given the swag option a miss on the previous nights – it was a crowded spot, and dusty, and it was suggested that the Kings Canyon camp would be far nicer. However, late on that chilly last night, I hadn’t remembered too ask, and figured “stuff it”, I would just hit the hay inside under a roof. Everyone headed to their respective huts, leaving three of us by the glowing embers, myself and two young Korean women. At that moment, taking me completely by surprise – they asked about the swags! (and damn-it, if they were swagging, so was I). Forestalling our guides’ bed time for another five minutes saw each of us with a small swag, which we rolled out on the sand near the fire.

The night air was nearly freezing, my swag was warm (no I can’t speak for theirs), the sky clear and with no Moon, the stars were out in their millions.

Next morning I asked them about it. Bought up in the city lights of Seoul, the young Koreans had barely seen the Milky Way, let alone slept under the stars in a swag. So there was another special new experience for some foreign travellers to take home. Another simple pleasure.