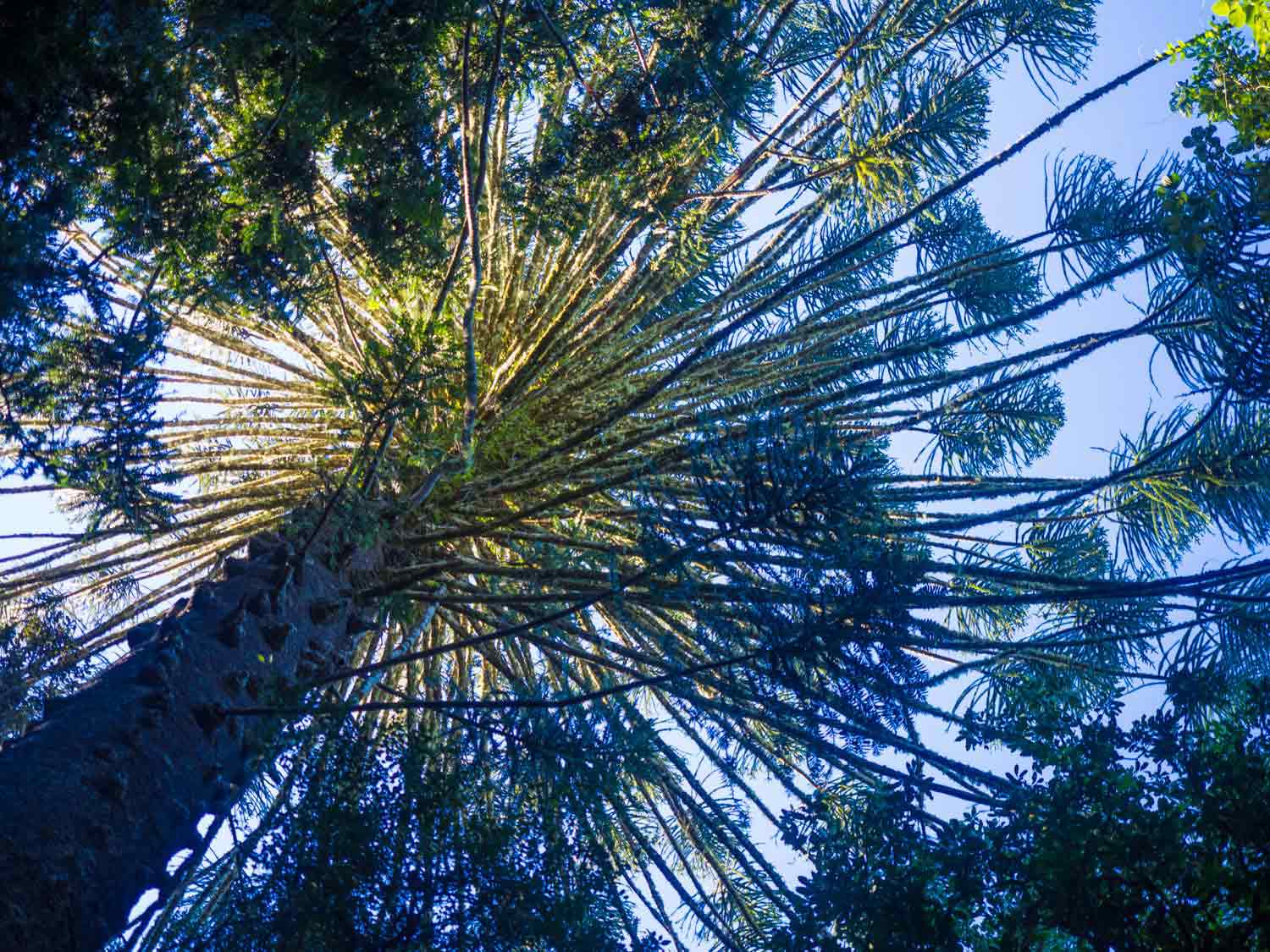 Could the Bunya Mountains be the one place to turn your preconceptions of human nature on its head?

I recently finished Bruce Pascoe’s book ‘Dark Emu’. It’s an accumulation of the abundant evidence that Australian Aboriginals practised what was, by any objection definition, agriculture – and on a large scale. It’s not just a conclusion that ought to stimulate Australian’s to take a hard look at what is taught as history – but the book adds to those of others (e.g. James Scott’s ‘Against the Grain‘) who are questioning our broader understanding of just what is agriculture, when it developed, and why humans bothered with it.

‘Dark Emu’ is fascinating reading, but it wasn’t until well into the book (Chapter 6) that two comments really messed with my head . Pascoe was writing about the famous ‘Bunya Nut Harvests’ which were held in Queensland’s Bunya Mountains until the mid 19th century. I’ve been to those Bunya Mountains many times now, either as a long day’s drive there and back from Brisbane, or a few times overnight camping. I think the first time I went was with the botanist Don Butler, who was studying the rainforest there for his doctorate. I’ve also been there with Kirrilee, Callum,  once took a minibus load of my American students there, also Vicki from Hong Kong, and most recently with Bob and Damien (aka The Museum History Guy).

The Bunya Mountains are the remains of an ancient volcano. As such, they are above than the surrounding plains, which will tend to make them areas of higher rainfall, and more misty, and have richer volcanic soils. Both of these factors tends to favour the development of rainforest on the Bunyas (Smith and Butler 2002). The rainforest on the Bunyas is what Australians call ‘dry rainforest’ – a diverse, fire-free vegetation, and the bunya ‘pines’ are a component of that rainforest.

An open under story of ferns below bunya trees in Australia’s Bunya Mountains.

To get to the Bunya Mountains from Brisbane involves a steep climb up the Great Escarpment to reach the rolling country of the Darling Downs. Then, whichever end you approach from, another steep, winding road gets you up to the top of the Mountains. But once you are there, it’s fairly level. There is an idyllic network of walking tracks through the forest – and cafes. The bunya pines are members of a group (Araucaria) that go back to dinosaur times.  The Bunya Mountains are one of the few places in the world to have two species of these trees – both ‘bunyas’ and ‘hoop’ pines, giving a particularly ancient feel to the place.

The Aborigines will have had a ‘dreamtime’ story for the origin of the Bunya Mountains. They will no doubt lie at the intersection of more than one ‘songline’. However, we no longer know these stories, because the last person who had that knowledge died before he or she could pass it on. Or if someone does know, they are keeping that knowledge to themselves. If the first reason is true, and I suspect it is, it is a major tragedy, as the Bunya Mountains had a central significance to the Aborigines of eastern Australia.

The bunya pines produce cones only every few years. Each scale in the cone is associated with a seed which is about the size of a bantams egg (the related hoop pines have seeds which are only a few millimeters in size) and can be eaten raw or cooked. When the bunya cones drop they are like 10 kilogram canon balls crashing 40 or 50 through the branches to the forest floor. I’ve experienced this, it’s a wild time to be in the forest – you sure as hell don’t want to be be under a falling bunya cone.

Mature bunya cones that have crashed tens of meters down from the forest canopy, and rolled into a gully.

This semi-irregular production of seeds was a big, and welcome source of food for the Aborigines. Tribes from all over Queensland, and perhaps further, were invited and walked hundreds of kilometers to the Bunya Mountains, to partake in a feast. Such feasts appear to have been going on for thousands of years – the clue being a peculiar feature of the Bunya Mountains called – ‘balds’. These are open grassy patches within the otherwise forested landscape and have raised questions among botanists as  to why are they there, and how to manage them (Webb, 1964; Fensham, and Fairfax, 1996ab, 2006).

A study (Moravek, et al., 2013) sought to understand the mystery of the balds by looking at the fossil record of pollen and charcoal which had accumulated within a swamp on the Bunya Mountains. The researchers uncovered a roughly 10,000 year history which began with the mountains having only sparse vegetation, and then the rainforest expanding a few thousand years later. The key finding was that at the same time as the rainforest was spreading, there was an increase in charcoal, indicating more common fires. Intuitively, if conditions were right for rainforest to spread, one might expect fire to be on the decrease. This pattern suggests that humans were setting fires to maintain some areas as open grassland, and not let them be covered in rainforest, and at the same time, not burning so much as to remove most of the rainforest. The findings are at least consistent with an interpretation that Aborigines were visiting the Bunya Mountains from at least 7000 years ago, and keeping some areas open by the careful use of fire.

Closely-spaced growth rings on a felled bunya give an idea of their growth-rate.

In the mid 1800s a few Europeans were privileged to witness the last of the bunya harvests. One was Tom Petrie, whose experiences were produced as a book by his daughter (his book can be downloaded here). Alas, with the complete breakdown of the Aboriginal way of life, the harvests soon ceased. The older bunya trees in the forest survive as living links back to the bunya harvest times. On one of my last trips several trees had been felled (as a result of storm damage) giving  a good chance to look at the growth rings.  I’ve also looked long and hard at some of the biggest trees, trying to decide if the scars up their trunks might have been hand and foot holds cut by people during the harvests. I could have saved myself the trouble if I had already read Petrie. He said that the Aborigines used this method on other trees – but not the bunyas, as they were considered too sacred.

Scars up the trunk of a bunya are probably where branches broke off decades ago.

And so those comments in ‘Dark Emu’ that blew me away. Pascoe wrote:

“But they chose to share the resource, actively pursuing the opportunity to attract other clans into their country for the purposes of cultural and social exchange. The resource was more than a commodity; it was a civilising glue“

He then went on to quote the anthropologist William Stanner (from Bird-Rose, in Edwards 1987):

“One of the most striking things is that there are no great conflicts over power, no great contests for place and office. This single fact explains much else, because it rules out so much that is destructive of stability … There are no wars of invasion to seize territory. “

And here we get to the nub of the whole issue.

I had long-known about the bunya harvests but it wasn’t until I read Pascoe’s comment and then Stanner’s in Dark Emu that the implications really started to sink in. There are no indications that the hugely important resource of bunya nuts was coveted and fought over, or was jealously protected as a core wealth of some state. Think what was likely to have happened if the Bunya Mountains were not in Queensland, but somewhere in the middle of Europe. Or if you prefer, that around two thousand years ago, the human inhabitants of Australia and Europe were magically switched over night. It’s not too much to imagine that the forest would have been fought over as various kings or warlords tried to add it to their list of achievements. Or perhaps just as likely, they would have been caught up in some religious war, where one side disagreed with the other sides interpretation of theological details, invaded, butchered the occupants and burnt the trees for good measure.

Aboriginal life was not some sort of love-in. It may have been egalitarian and sharing – but even Petrie noted that the Bunya feasts “always ended up with a big fight, and at least one combatant was sure to be killed.”

But that this massively important resource was shared with people for hundreds of kilometers around, probably for thousands of years, and without triggering wars of conquest is a stunning indication of just how different Australia was. Growing up with a standard western mind-set one can too easily fall into the trap of thinking that some behaviour,  i.e. endless cycles of territory-grabbing and empire-building, is simply innate to human nature. It takes some thing special, like the Bunya Mountains and their nut harvests, to shake us out of that.

The Bunya Mountains are a long day’s drive from Brisbane – in fact, round about the limit of a sensible day-out. But given their profound importance, perhaps we might want to make the trip even longer. Walking somewhere is the perfect pace for contemplating a landscape. It’s been something like a century and a half since people walked from all over Queensland to the Bunyas, and perhaps we should be doing it again. Maybe it’s time for Queensland to re-establish some walking trails to the Bunyas.

The distinctive crowns of bunya trees in the Bunya Mountains.

Fensham, RJ and Fairfax, RJ. 1996a. The disappearing grassy balds of the Bunya Mountains, south-eastern Queensland. Australian Journal of Botany, 44: 543–558.

Fensham, RJ and Fairfax, RJ. 1996b. The grassy balds on the Bunya Mountains, south-eastern Queensland. Floristics and conservation issues. Cunninghamia, 4: 511–523.

Note that Australia’s Bicentennial National Trail passes through Yarraman, about 30 km from the Bunyas.