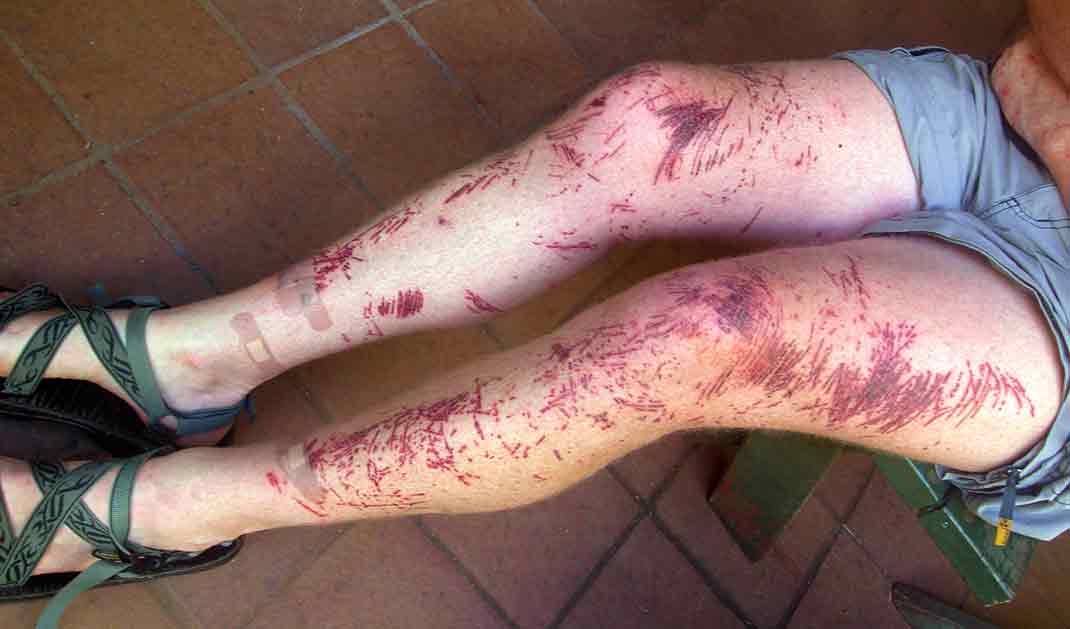 “If I had a camera I could take a photo and show guests what my uncle’s legs looked like after he found the Stintson”.

Between teaching my groups of American students ecology up at the rainforested O’Reilly’s Rainforest Retreat, and in the adjacent Lamington National Park, it often seemed like there were a couple of free days. It may have been the way I planned it, though I’d never admit to it. But in these days I could wander the rainforest and work on upping my plant-identification game. At one point I could identify 111 rainforest species on-sight, and was starting to feel almost respectable. But there was something else that I was waiting for a chance to do – to walk to and see the famous wreck of the Stintson airplane.

It’s a story that many Australians will know. The details are elsewhere, but briefly, in 1937, a three-engined passenger plane, a ‘Stintson’, with seven people on board, had gone missing somewhere between Brisbane and Sydney. After a fruitless week, searchers had pretty well given up – but Bernard O’Reilly, who lived at what is now the O’Reilly’s Retreat – thought he would have a crack at finding it. He headed up the track to the New South Wales border, camped, then next morning, turned right into dense forest. It was raining, but during a short break in the weather, he climbed a tree – and spotted what seemed to have been a burnt patch a few kilometers off. Eventually he found two survivors, near-dead, but with enough life in them to first ask him what the cricket score was. It’s a tale of genuine heroism.

Few people make the walk to the wreck now – it’s off the beaten track, but I figured that on one of my free days, I would do it. When that day came, I got up at 05:00, had a cup of instant soup, and then, dutifully, wrote my plans in the O’Reilly’s ‘intentions’ book. I said I was heading out to the Stintson wreck, that I was carrying a two-way radio, gave the channel I’d be on, and this is the crucial bit, said I planned to be “back for dinner”.  Then I set off.

The first part was the standard track up to the ‘caldera rim’. This is the border between Queensland and New South Wales. I’d done this walk many times before. It’s a steady rise on a good track, all under solid rainforest. At the T-junction, instead of turning left, like I usually did, I went right. From here-on, the track was smaller, and then. after Echo Point, became merely a ‘route’. From there, the way, which was indicated by a few markers on trees, was barely discernible. It was all vegetated under foot, but there was a strip, perhaps a foot wide,  where you could just make out damaged plants, where a few people had trod. Take one pace to right or left, and it vanished, with no sign.

A view along the caldera rim. New South Wales on the left. Bernard O’Reilly would have seen a similar view in 1937 – with the Stintson wreck in what is here within the raincloud in the distance.

Now the weather deteriorated. Rain turned to pouring rain, and as I headed along the ridge, it got very dark. I stuck to the route – it was barely visible, but between what  could see, and knowing that it had to lie close to the caldera rim – it wasn’t too hard to follow. But spare a thought for Bernard O’Reilly, when there wasn’t even a route here. The weather conditions that I was experiencing now, were probably similar to what he dealt with in 1937. But I think it has to be said – that for Bernard to have gotten the impulse to climb a tree up here, and even expect to see something from it across miles and miles of dense rainforest canopy – he had to be slightly mad.

As well as the radio, my pack had warm clothing, wet weather gear, a torch, and food. I also had a GPS, although I’d just bought this, and had only got my head around taking coordinates – not using it to find my way back along a path. I also had a few chocolate bars and some apples.

First sight of the Stintson wreck – a pile of metal in thick rainforest.

For me, the rain eased off after a couple of hours, and it turned into a nice day. I kept moving along the caldera rim, under the low forest, until the route veered off down to the right, towards where the plane wreck was supposed to be. It was a little after 2:00 pm – later than I had hoped it would be, when  I found what was left of the Stintson wreck. It was just a pile of metal machinery- all that remained after a few decades of souveniring. I took my pack off for the first time, found an apple, ate it quickly, and within minutes, set back off for home.

Detail of all that remains of the Stintson wreck. A memorial plaque is in the background.

The trip back along the rim was pretty straight-forward. I just had to keep New South Wales on my right, and go as fast as I could along that vague route. The weather was fine – but by and by, I started to feel a little uneasy.

The way home. The route lies along the forested ridge at left – the caldera rim, and I needed to make the skyline before dark.

The sun was getting lower and lower and I wanted to make Echo Point before it set. I could walk down the track from there in the dark, but I wouldn’t be able to follow the vague route that lay on this side of it. Just as the sun started to set, a route veered off down-hill to the left. Finally – I was on my way down to Echo Point! I spotted a few more markers on trees, got lower and lower and then… And then… It was dark.

I was under a dense canopy of forest. There was no moon, it was cold, and the trees above me were heaving around in a string wind. Things did not seem right. I took my pack off for only the second time that day, and under the light of my torch, had a good, long look at the map. Most likely,  I figured, I was at the top of a dead-end plateau called ‘Lost World’. Whatever route markers I had followed had set me off a little too soon. Damn. I now had two options. I could spend the night here – uncomfortable, but no big deal. Except, I had written those words in the ‘Intentions’ book. “Back for dinner”.  If someone back at O’Reillys was paying attention – then someone might be worrying.

There wasn’t much point in trying to find my way back up the route to the caldera rim. I’d never be able to do that in the dark. So I figured that I may as well head back up obliquely through the dense forest. I may not recognise the rim-route when I crossed it, but if I found myself in free-fall, I’d know I’d gone too far – and was on my way down to New South Wales. The down-side of doing this  option was that if I had an accident, the chances of ever being found again would be slim.

After an hour of bashing my way up through solid forest in pitch dark, the ground began to fall off abruptly in front of me – I played my torch back and forwards, but the beam was lost in blackness. It was definitely the caldera rim – and the New South Wales border. I back-tracked a few meters, and with careful torch scanning – I found the route. I only lost it a couple of times before, after another hour, I finally made it to Echo Point. Now I could put the pace on. Along the track I passed masses and masses of glow worms – pity I didn’t have time to admire them. A couple of times I stopped and used my radio. New South Wales lay to my right – with nothing to hinder a radio signal. Anyone down there with a radio on and within a few kilometers, would have picked me up. I went through each channel, calling for a response. Nothing. Such a stunning contrast to day-time. When I took my student groups up here, I’d keep in touch with my tutors via radio. We’d lunch on the caldera rim, but sometimes I would have to turn the radio off  – the language coming over it from (what I assumed were) truckers somewhere down below, was so blue, it went way beyond a lesson in Australian culture. But tonight – just silence, Dead silence.

I reached the T-intersection and headed left. Now it was just straight down the ridge to O’Reilly’s. Within ten minutes I heard voices – and saw light. It was two guys from O’Reilly’s with radios. The back for dinner” comment had not been missed, and the alarm had gone off. It tuned out that O’Reilly’s didn’t use the channels on my radio, though because of the terrain, we’d have had little hope to connect anyway.

Forty-five minutes later, and seventeen hours after I had set off in the morning, I was back at the O’Reilly’s Retreat. My two searchers showed me some food that had been put aside for me, and headed off to their pads. I ate, and headed off to my room. So all that was left now was to crawl into bed?  Wrong.  My legs had been pretty severely ripped up by the thorns of ‘wait-a-while’ palms, a few leech bites were bleeding profusely, and somewhere on that oblique route up from Lost World, a small branch had skewered an ankle. Without carefully arranging some clothing between me and the white O’Reilly’s sheets, I would have seriously messed them up. All I wanted to do now was lie down – but even that meant excruciating pain!

Next day I took it easy, wandering around O’Reilly’s. Preferably I would have worn trousers, to hide the rather alarming sight of my legs.  But the friction against them was far too painful, so shorts it was. I ran into Shane O’Reilly, who took one look at me and barely stifled a giggle. Then I ran into Paddy O’Reilly, who made the comment about what his uncle’s legs had looked like after the rescue. However, the funniest comment came when my next group of students arrived. I was waiting as the bus from Stanford University arrived. The door opened, the first student bounced out, took me in and, eyes as big as the proverbial saucer, asked: “Is that what we’re gonna look like at the end of this trip?!”

All-credit to the O’Reilly’s Rainforest Retreat staff for taking their intentions book seriously, and, of course, the couple of chaps who came up to look for me. It was a wonderful few years getting to know the O’Reilly’s area well – I miss it so much!