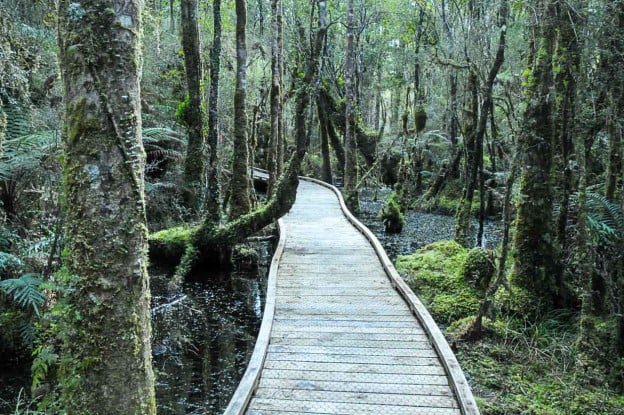 At Ship Creek, just a few kilometers north of Haast, in South Westland, New Zealand, there is a wonderful boardwalk though an original swamp forest (It’s less than 3 km south of Coal Creek – where I found my first plant fossils, aged nine). The key tree is kahikatea (Dacrycarpus) and the  walk features a nice specimen of that species. There used to be a sign next to it describing it as a ‘dinosaur tree’ with a history back to the time of the dinosaurs. That’s debatable, but I see the sign has now been replaced. A comment on its history is now a little more circumspect, but there is something new:  Ship Creek is a “tropical rainforest”.

Huh? I’m sure the good folks of Haast would be bemused to hear their environment described as “tropical”. The place has an average annual temperature of about 11.3 C, although frosts are rare and light. However, I suspect “tropical” in this case refers to the structure of the forest, not the climate.

The arguments for this are best developed by J.W. Dawson, but the basic notion goes back to Cockayne (1926), who decribed New Zealand’s lowland forests as “subtropical”. Central to Dawson’s viewpoint was that vegetation types at a world-level be based on structure, not floristics or climate. Dawson (1962) explained that structurally, New Zealands lowland forests have several elements that are in common with tropical rainforests. These are things such as being multi-stratal (several layers of plants) and an abundance of lianes and shubby epiphytes. Some authors also note the abundance of tree ferns. Dawson made a point of distinguishing New Zealand’s Nothofagus forests from the lowland ‘tropical rainforests’. He saw the Nothofagus forests as being more closely related to the temperate deciduous forests of the Northern Hemisphere.  Nothofagus forests, at least the relative pure ones, have a notable lack of epiphytes and tree ferns and a very even canopy.

Dawson concluded that the “New Zealand lowland forest is closely related to tropical rain forest” and that the “use of the term ‘subtropical’ for this [lowland] forest is justifiable”, largely on floristic grounds, despite the confusion with geographic and climatic usage. He made the good point that “unlike the tropical zone the subtropical zone is not geographically defined”. Technically New Zealand is ‘subtropical’, but most people would not apply the term that way. Dawson added that he hoped a “botanist with a knowledge of all types of world vegetation” would come up with a classification “based on the nature of the vegetation itself”.  In fact, a few years earlier, the Australian botanist, L.J. Webb, who certainly would not have claimed that breadth of experience, but who did know Australian forests, had already attempted a classification based on their own features, and which dropped the tropical/subtropical/temperate terms (Webb 1959).

The theme of New Zealand forest classification was again taken up by Dawson & Sneddon (1969). The conclusion was “Ecologically, the New Zealand rain forest is comparable to lowland tropical rain forest in stratification and in range of special growth forms”. However, in this paper, the concept of “subtropical” was dropped, never to be mentioned once.

The swamp forest at Ship Creek has the typical ‘structural’ features that link it with more tropical forests. You can see plenty of lianes, epiphytes and tree ferns. It occurs in the ‘beech-gap’, meaning there are no Nothofagus trees. So is Ship Creek “tropical rainforest”? Yes, but from a tropico-centric point of view where tropical rainforests are seen as a kind of norm. Or we could make the leap and ignore both geographical confusing terms as well as ‘rainforest’. Under Webb’s (1959) classification, New Zealand lowland forests would probably be called “notophyllous vine forests” or “microphyllous vine forests” (in my opinion, much of what have been routinely called notophyll forests in Australia, are actually microphyll). But perhaps the more interesting question is not why New Zealand lowland forest ‘looks like’ tropical forest (why shouldn’t it?), but why pure Nothofagus forest (which surely boils down to the Nothofagus trees themselves) tend not to develop epiphytes and lianes and have tree ferns (dryness, surely).

Don’t let any of these semantics put you off the highly recommended Ship Creek boardwalk. It will only take 20 minutes from the car park, the path is almost flat, surfaced to about 1.5 m wide, and just in case visitors need to walk six abreast, the vegetation has been trimmed a further half meter or so either side.

And do get there in the next century or so – it’s a forgone conclusion that Ship Creek will be flooded from sea-level rise.