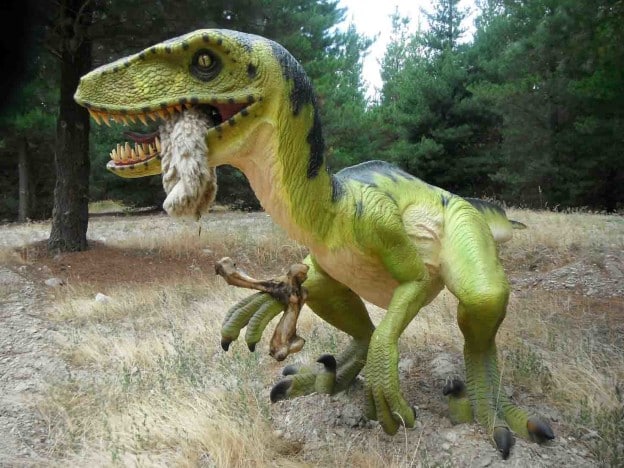 Growing up in Alexandra it inconceivable that Cromwell might somehow overtake Alex. Alexandra was The Hub. Cromwell was the little place you passed through on the way to the little villages of Queenstown or Wanaka, where you holidayed. But things have happened in Cromwell, and one of the big things is the Highlands Motorsport Park. It’ s been about a 40 million dollar investment by Tony Quinn, which has become a huge tourist attraction and created about 40 jobs. Quinn’s philosophy is that the park needs to be something for all the family – not just a place where Mum and the kids wait patiently while Dad watches fast cars. To this end a ‘dinosaur safari’ has been created. For just under an hour the kids will be entertained by being driven past a series of life-size dinosaurs scattered along a forest trail (all from a specially-protected van). There’s then a half hour or so out of the van where they can touch some friendly dinosaurs and other ‘extinct’ beasts, use the flying-fox, commando-course, or …. watch the fast cars. I would guess the place has special appeal for 3-10 year olds, but older ones will all learn something.

New Zealand had dinosaurs in the Jurassic (one bone is known) but a modest menagerie is known from the Cretaceous. Just like the ‘Jurassic Park’ films, the Highlands Motorsport Park has Jurassic and Cretaceous dinosaurs. It also has some critters from before and after dinosaur times, for example Megalania – the largest land lizard known to have existed.