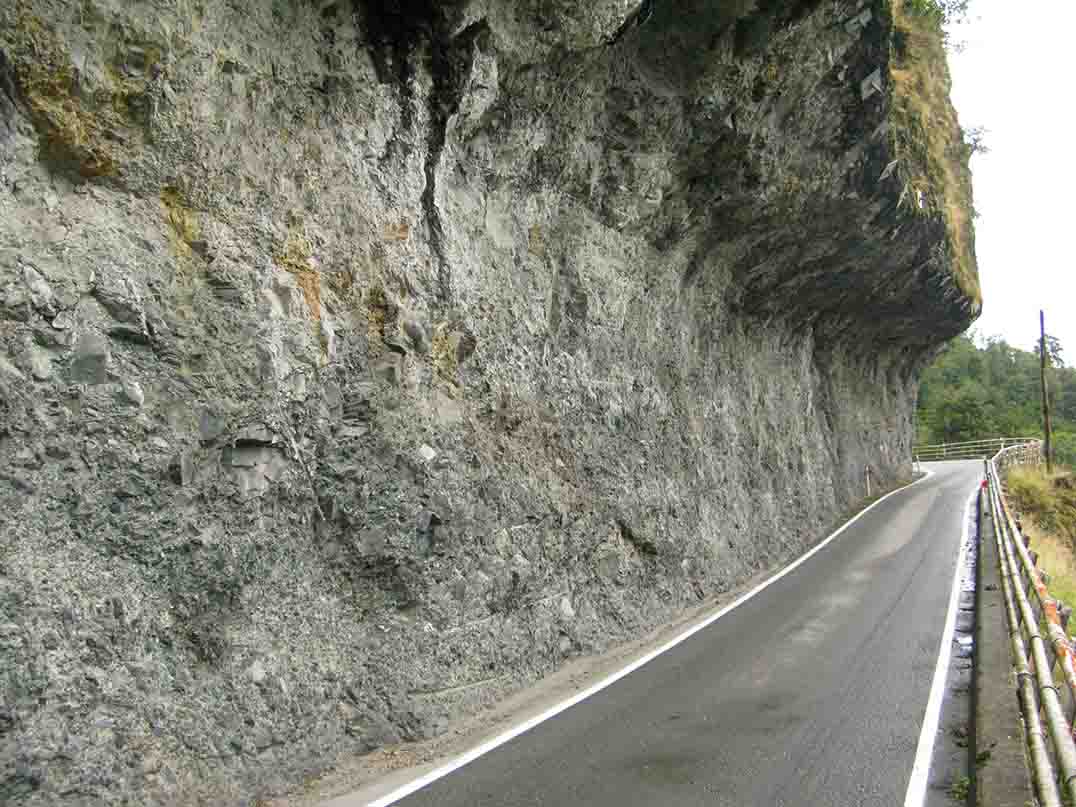 The bluff that the road cuts around is’Hawks Crag’, and the rock its self is a ‘breccia’, composed of angular rock fragments in a finer matrix. Hence the formation that the road cuts through is called the Hawks Crag Breccia. It’s one of the more intriguing units of New Zealand geology.

The origin of the Breccia is relatively clear – it is the accumulation of material on a ‘fan’ – along the edge of an actively-growing mountain (this type of rock is sometimes called a ‘fanglomerate’). The rocks have not traveled far -rivers have not rounded or sorted the boulders. Material simply poured off active fault scarps into a basin. However, for many years the age of the Hawks Crag Breccia was unclear. Partially this was due to the nature of the breccia itself. It is largely devoid of fossils. But there are a few mudstone beds that would have been flood basins or swamps, and these did prove to have fossil spores. But many of these fossils were new – they were found no-where else, and thus could not be correlated elsewhere. From a variety of reasons, an early conclusions was that the Breccia was Jurassic (Couper, 1953, 1960). However, this was a problem, as the fledgling science of radiometric dating rocks at the same time concluded that the boulders in the breccia, were Cretaceous (Aronson 1965). The age of the rocks in the breccia of course, cannot be younger than the breccia itself. Either the radiometric date, or the date based on fossils, had to be wrong.

Detailed view of the Hawks Crag Breccia – an unsorted pile of sharp-edged rocks.

Eventually 30 species of plant fossils were found in the Hawks Crag Breccia (Norris 1968) – and fortuitously, at the same time, a detailed study of similar fossils in the Cretaceous of Australia became available (Dettmann and Playford 1968). This led to confirmation of a  mid Cretaceous age (late Albian, c. 105 Ma) of the Hawks Crag Breccia (Norris and Waterhouse, 1970; Waterhouse and Norris 1972; Raine 1984). There was no longer a problem with the age of the boulders – they were formed slightly before they entered the breccia. Several plant species that grew at Hawks Crag were also in eastern Australia. In some respects this is not surprising, as at the time, not only were they closer, but you could have walked from this part of New Zealand to Australia, or even Antarctica.  New Zealand was peripheral to, and only just breaking away from, the continent of Gondwana.

The plant fossils of the Hawks Crag Breccia (Norris 1968) are a diverse mix of lycopods, ferns (including tree ferns), podocarp and araucarian conifers, as well as the pollen of an extinct conifer family, the Cheirolepidiaceae. In some respects, the particular pollen and spore fossils are reminiscent of the cool and wet New Zealand vegetation today – but with one major difference – there were no flowering plants. These arrived in New Zealand very shortly (a million or two years or so) after the Hawks Crag Breccia accumulated.

The Hawks Crag Breccia is now understood to be one rock type in a broader system – the Porari Group. For example, the very different Bullock Formation is made up largely of mudstone. This has been interpreted as a lake, or series of lakes, into which the Hawks Crag fans flowed (Laird 1995). The Porari Group is now scattered over about 320 km of the West Coast, as well as there being similar deposits east of the Alps (Laird 1995). One could thus think of a ‘Porari Landscape’ or even a ‘Porari Ecosystem’.

In the broader picture the deposition of the Hawks Crag Breccia, and the whole Porari Group, was related to the Rangitata Orogeny – the period of mountainous upheaval that preceded the New Zealand region breaking away from the rest of Gondwana (Carter et al. 1974; Waterhouse and Norris 1972; Adams and Nathan 1978). The Rangitata Orogeny is one of New Zealand’s major periods of geological change where the regime went from compressional to extensional and eventually led to New Zealand drifting into the Pacific (Laird and Bradshaw 2004).

Schematic diagram (simplified from Schulte et al., 2014) to show the the Porari Group (including the Hawks Crag Breccia) forming on the flanks of a Metamorphic Core Complex.

In detail, the Hawks Crag Breccia can also be placed into a more recent concept – the Metamorphic Core Complex (Tulloch and Kimbrough, 1989; Schulte, et al., 2014). These form in extensional environments, and consist of a central core of deeper, older rock that rises to the surface and is typically intruded by granites, while breccia-filled half-graben valleys develop on the flanks.

I wonder how long it will be before some local-Councillor gets it into his or her head to blast away this quirky stretch of road, to enable more people to get through, faster? In the meantime, just keep driving carefully, watch out for on-coming traffic. and the odd person having a closer look at the Hawks Crag Breccia.

References (links will take you to a downloadable pdf)

Dettmann, M.E., Playford, G., 1968. Taxonomy of some Cretaceous spores and pollen grains from eastern Australia. Proceedings of the Royal Society of Victoria 81, 69-93.