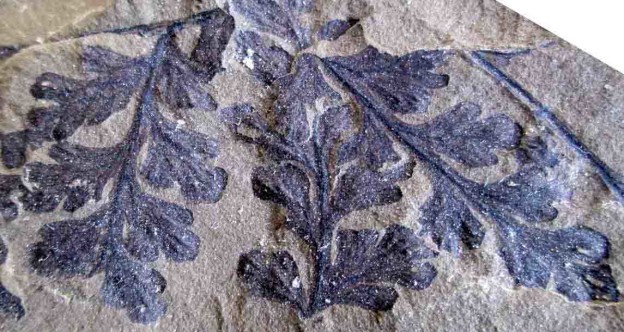 One of the plant fossils that turns up in New Zealand’s Jurassic rocks is a delicate-looking fern frond called Coniopteris (Arber, 1917; Edwards, 1934; see featured image). The well-known Jurassic fossil forest at Curio Bay (Pole 1999) would have had Coniopteris growing in it. And, oddly enough, it’s in the same family as one of New Zealand’s living tree-ferns (Dicksonia) – that grow around Curio Bay today.

A Coniopteris fossil fern from the Jurassic of southern New Zealand.

Only one species of Coniopteris fossil has been found in New Zealand – but one that appears to have been truly global in distribution (C. hymenophylloides). It has, for example, also been found in England. How could this be? Back in the Jurassic period, New Zealand was not the isolated landmass it is today – but was part of Gondwana. As long as you carefully avoided the dinosaurs, you could have walked to Australia or Antarctica and from there on to much of the rest of the world. One might suspect, given these connections, that much of New Zealand’s fauna and flora would have been shared with other parts of the world. Of course, just because there are land connections, doesn’t mean the life will be the same – climatic barriers exist. As one moved north or south, it might be expected that eventually the climate became too hot or cold, or perhaps too dry, for a particular species to survive. And there’s the thing – the temperature of the Jurassic world was very moderate. There were no polar ice caps – meaning that as you moved north or south from the equator temperatures would have changed much more slowly than today. Probably there were no, or only very light frosts in the more polar regions. These far more equable conditions would have meant much broader vegetation belts than today.

Just how Coniopteris managed to spread all over the world, is anyone’s’ guess. But it seems to have managed this rather quickly. In some parts of the world, paleobotanists take the appearance of Coniopteris fossil as an indication of the start of the Jurassic. In older, Triassic rocks, there are no, or usually no, Coniopteris. Following a massive global extinction at the end of the Triassic, Coniopteris spread rapidly around the world.

That only one species of Coniopteris is known from New Zealand is rather telling – in other parts of the world there were more. For example, in the Jurassic of south-eastern Siberia, nine species of Coniopteris have been reported (Lebedev 1965). This suggests that conditions were particularly good for it there, but not so good in New Zealand. It’s another scrap of evidence for New Zealand lying at relatively high latitudes in the Jurassic – despite the lack of polar ice caps, conditions were still less-optimal than more equatorial regions.

But what happened to such a hardy plant? It turns out that, by convention, the name Coniopteris is only applied to Mesozoic (Triassic, Jurassic, Cretaceous) fossils. Unless you know this paleobotanical idiosyncrasy, it becomes just another thing on the list of what was killed off at the great Cretaceous-Paleogene extinction. So it raises the question – did Coniopteris go extinct at all? That doesn’t seem so easy to answer – but there are those tree ferns still growing around Curio Bay….