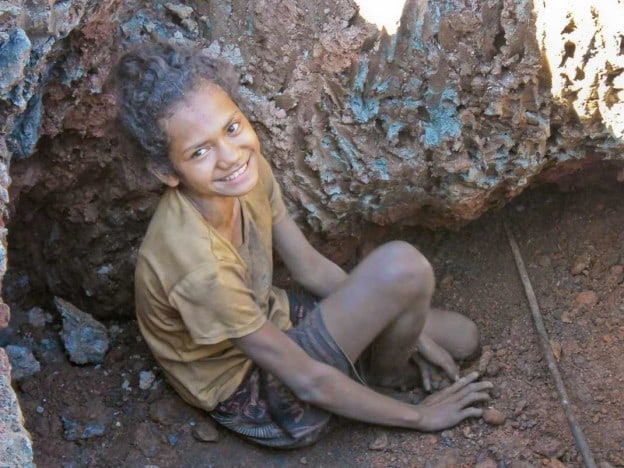 West Timor – Mine of Women, and the Palm-Wine Bomb

I never thought to see a mine run by women. By why not? And why?

Timor is an island north of Australia, and owes its existence to the geological collision between Australia and Indonesian archipelago to the north. The east side of Timor is now independent, while the west is part of Indonesia. If you are used to Indonesia, West Timor comes as a bit of surprise. The dominant people are obvious different – they are Melanesian (not southeast Asian), and the dominant religion is Catholicism (not Islam).

Food on the streets of Kupang, West Timor.

The geologically action pushed Timor out of the ocean. This means that much of the land is ancient coral reef. But what was also pushed up, and can be seen here and there, under the coral, are old sea floor sediments – beds of shale and sandstone. And these sometimes contain dark, thin beds of manganese. Extracting manganese has become an important part of the economy. It’s stuff that you and I use, in batteries for instance. Despite billions of batteries being discarded each year, economics tell us, apparently, it’s cheaper to keep digging the stuff up.

Beds of manganese among shale and sandstone, West Timor.

I was sent to West Timor to look at the manganese. From the town of Kupang on the coast, I went first to see an industrial-scale manganese mine. I was shown around the big open-cast mine by a Java-educated Asian geologist. Machinery can do the large-scale work, But because the manganese is typically in those thin beds, separating it out from the shale and sandstone needs a human touch. This hard work was being done by little groups of people sitting on the ground, breaking up the mixture of ore and rock, and hand-sorting it. They were lovely friendly people, but oh… the life of hardness and despair to be seen in their eyes. The geologist told me that Muslims were the preferred workers – more dependable, and no problems with alcohol. I saw some smaller mines out in the hills, where locals were scratching up whatever they could find.

The next day Roni, myself and our driver set off on a long trip to the interior. The road was constant curves, round and round as we headed into the hills. After some hours, as the road curved to the left, we passed a motorbike. It was lying on the edge of the road, near a deep, straight-sided concrete storm-gutter. On the other side of the gutter, several meters away a youth lay on his side. His eyes were closed giving him a peaceful look, but his body was at an odd angle, and in the wrong place. Others were there and we didn’t stop, but kept on our winding way.

We arrived at a village and were shown several piles of manganese ore. Each pile was maybe two meters in diameter. These were stockpiles the villagers created from manganese collected in other parts of their region. Once in a while a buyer from the coast would arrive, negotiate, and a sale made.

Guides from that village led us along the ridges until presently we came to another village. We walked out of the forest and down the side of the ridge, to come across a warren of holes. It was a local manganese mine. But this one was different – the entire operation was being carried out by women. There were three generations of them down the pits, digging away in conditions it would make any WPH and S officer blanch. Every man in that village was away in other parts of Indonesia working. The only males of any kind I saw were a few very young boys. The women were all friendly and cheerful, but clearly tired. It was slow, tedious, and back-breaking work. I did my work, basically a look-see at what was in the pits and what was being stockpiled nearby, gave my thanks and goodbyes, and we all headed back towards the firs village.

Here we went through the village formalities of visitors and guests. Everybody, men, women and children gathered under a big thatched roof. There was food – and some palm wine. I was keen to get some of this stuff, to take back as a little souvenir.

Palm wine is pretty simple stuff to make. When a palm tree is cut down, a rectangular incision, maybe 30 or 40 cm along each side, is made in the trunk. The outer part is sliced off as a lid, then the hole is dug deeper, almost right through the trunk, but just a little hole is pierced right through to the underside of the palm log. The hole is filled with the hashed up trunk pieces. Then the ‘lid’ is put back on the top, and a plastic drink bottle is put under the little hole underneath to collect the sweet, fermenting liquid that starts to dribble out. Its that simple.

Getting some wasn’t quite as simple as I’d hoped – someone had needed to go back to a producing tree. We sat and waited, and waited and waited. Eventually the wine appeared – a large plastic Coca Cola bottle full of milky white liquid.

We got into our vehicle and I stashed the bottle at my feet. We set off and our long, winding road home. Several hours of travel. Night fell and we kept winding our way through the valleys along almost deserted roads. The trees on either side flashed past momentarily at the edge of our headlights. Hour after boring hour. As we were passing through the area where the young man had died earlier in the day, the palm wine detonated.

The noise seemed to come from everywhere. Along with a lot of liquid. It was only once the driver regained control of the vehicle that we realised what had happened. The still fermenting plastic bottle of wine, warmed by the heat from the transmission, must have finally expanded to the size of a football. It was the Marvin’s head scene in Pulp Fiction. There was palm wine over the entire inside of the vehicle, us included.

Of course, I never did get to taste that wine – but I have this awful feeling that to this day, anyone who drives in that vehicle will still be able to smell it.