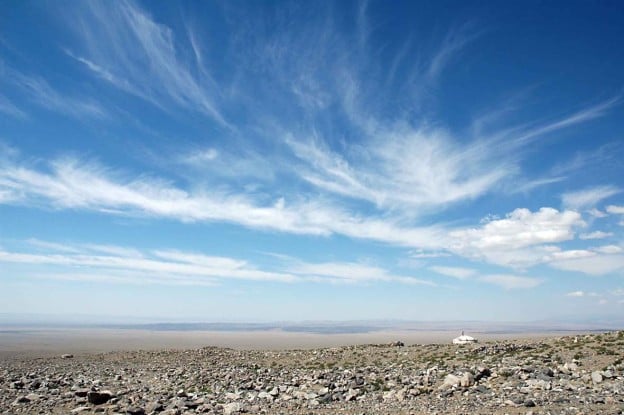 Erik von Daniken’s ‘Chariots of the Gods’ came to my town when I was a kid. Alexandra, New Zealand was perhaps a bit information-starved. There was one-channel TV, radio of course, and a couple of newspapers. And then there were the ‘Pictures’ (one a week movie screenings at the cinema). So a well-marketed movie about space-travellers once coming to Earth could get a good turn-out.  There are a few things that stick in my mind from the movie- the Mayan wall image, purported to be a spaceman inside his ship, the Nazca lines, and something about the Pleiades star constellation. As I remember it (may be confused, I did read a couple of his books later) a point was made that some non-technological cultures knew about more stars in the Pleiades cluster than you can see with the naked eye (normally seven). And how could they have known without telescopes…..?  Well, I’ll tell ya.

In Mongolia, whenever I could, I’d sleep under the stars – in an Australian ‘swag’. This is a tough canvas bag, that can take your mattress, sleeping bag, blankets and pillow, and then be rolled up for transport. It makes a big bundle, but just perfect as a seat for when you are eating. You can pretty much un-roll it anywhere, just slide in, and spend the night.

The full moon in a cloudless night, over the car park of one of our Gobi base camps.

Apart from living in the base-camps, where we lived in gers/yurts, or even a container on wheels,  there was only one night where I was happy to be in a tent.

3:30 and after shoveling snow to prepare the ground, our tents are up.

I have a photo taken at around 10:30 that day. We were in a Landcruiser making our way towards the Sharga Desert. It’s sunny, and it was hot. The next photo was taken at 3:30 as we arced back towards the Altai. By that time we had needed to shovel snow to clear a patch of ground to pitch a tent. It was bloody cold. Inside the tent we tried to get a meal going with our gas cooker. It was so cold that the fuel in the canisters was frozen up. We managed to get one alight, then there was the somewhat alarming procedure of holding another cylinder over that flame, to thaw it out. The expert cooks in the team produced a soup, and the fat froze around my lips as I drank it.

Some nights it snowed after we had got into our swags. They were fine, because you were set-up. One night I looked up from my swag and thought “No problems tonight”. It was cloudless. Three hours later the bizzard struck. I folded the swag lid over, but no matter what I did, fine snow kept blasting in through any little gaps.

Another evening we crawled into our swags with an electrical storm flashing far-off on the horizon. Now it’s a desert, so it doesn’t rain much, and anyway, what are the chances that that storm will come this way? Of course, that storm had already spotted us, and definitely headed our way. I was already pissed-off as I’d discovered my sacrosanct swag had been ‘modified’ back in the city. A mattress was gone, and my own pillow (the most important thing for me to get sleep) had been replaced with a bean bag. But there was more. Something wasn’t quite right, and I didn’t twig til too late – after these things had been taken, the swag had been rolled up the wrong way. They are a lot less water-proof upside down. The storm hit, and I sequentially curled myself up further and further away from a growing wet spot, until I eventually got soaked through. Everyone got soaked that night, so it likely wouldn’t have mattered what way up the swag was. Rain was so infrequent we realised that the swags had never seen water-proofing in years.

Late afternoon -a typical stop for a Mongolian night under the stars. Our swags are on the ground to the left of the Land-cruiser.

Not long before dark, another cloudless Mongolian night. The dinner box is out and food will be not long off.

But most nights in Mongolia are  clear – utterly clear. The problems aren’t cold, or snow, or rain – but that there is just too much to see.  Forget T.V. – nights under the Mongolian stars are nights you don’t want to close your eyes. Thousands upon thousands of crystal-clear stars. Millions I guess. Planets, and meteors, and satellites (not a single aircraft, ever).  I could stare up into them for hours.

The Great Bear was always up there. I had long heard of this famous constellation, that goes round and round the North Celestial Pole. But as a Southern Hemisphere Pole, I’d never seen it – until, after several trips to the Northern Hemisphere, I was in the right place, with the right person a few years fore – and I thought of it. I was immediately led out the door and had The Great Bear pointed out.

Then there were those Pleiades, one of the most recognisable ‘objects’ in the sky. Unlike the Bear, they move right across the sky at night – so if you poke your head out in the wee hours, you can get an idea of the time from where they have moved to. People have been looking at the Pleiades for thousands of years – so long that myths around the world have an uncanny resemblance. Typically they are young women, sometimes boys. One of the seven is fainter than the rest, and she/he is a sister/brother who was left behind and trying to catch up. There are many variants.

But out in the Mongolian desert at night, in my swag, I remembered the business about how many you were supposed to be able to see. With a pencil and my notebook, I drew all the Pleiades I could see. I couldn’t see them all at once – it meant a bit of looking from side to side and using some peripheral vision.  But I did this on two occasions and – I could see nine. So the answer Mr von Daniken, is that given clear skies, and reasonably good eyes, and just looking – you can see more than the traditional seven. This is quite possible, though if I could see nine, I should have been able to discern a few more. Perhaps the real mystery is why most societies are happy with seven (it has been suggested that seven is just a cool number).

Mmm, but you know? That Mayan carving really did look like a spaceman in his craft