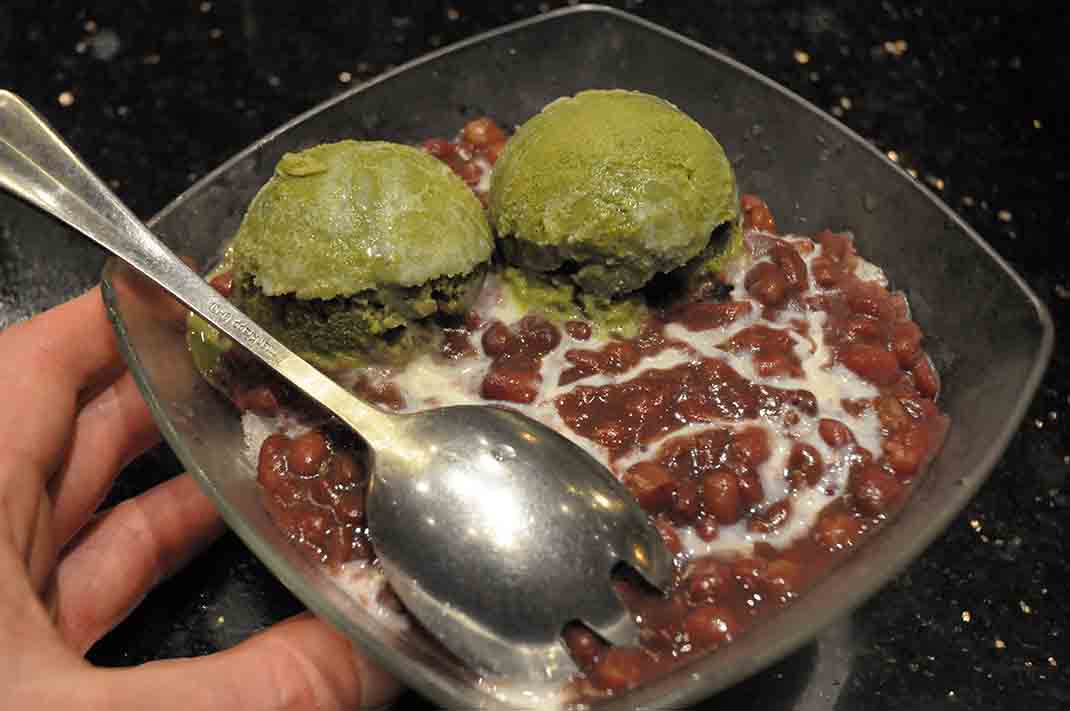 The green tea and red bean ice-cream (see featured image) served by Bellagio’s became an absolute favourite of mine whenever I was passing through Beijing, going to and from Mongolia. Bellagio’s is a restaurant chain and there were two outlets I would go to there. When I came to Nanjing I was thrilled to see that there is a branch not too far down the road.

Bellagio’s is a bit up-market, so I waited for a special occasion to go – Christmas Day.  I rocked up at the same time in the evening as much of the rest of Nanjing. I was given a computer-printed reservation number, and leafed through the menus as I waited in the foyer with several others. Waitresses rushed two and fro with wireless head-sets. It was a frantic but apparently well-organised operation.

Eventually my number came and I was pointed upstairs where a table had freed up. I knew exactly what I wanted – the Green Tea and Red Bean Ice-Cream of course, but preceded (P-R-E-C-E-D-E-D) by one of their spicy mains that was also an old favourite – Taiwanese Deep-Fried Bean Curd. And, since it was Christmas, how about a bowl of Black Seasame Soup?

A couple of women were ordering at the table beside me and I took note that they ordered their main and the dessert at the same time. I used all sorts of sign language to indicate I wanted the soup, then the Bean Curd, then the ice cream. My fear was that I would be part way through the main when the ice cream arrived.

Epic, epic fail. Especially given that in China the customer is always wrong and the whole restaurant has frozen, chopsticks in mid-air, wondering: ‘So the ice cream came first – what the Confucius is the foreigner worried about?’  I managed to have it sent back, and enjoyed my mains (really recommended).  The ice cream duly arrived, un-melted (on its bed of shaved ice), so I guess there hadn’t been an American Road Trip French Toast scene with it.

I’ll head back there again before I leave Nanjing, but perhaps I will research the Chinese words for “Ice Cream only after the main”, or similar, first.

The  Taiwanese Deep-Fried Bean Curd was 31 RMB, the Black Seasame Soup 21 RMB, and the Green T ea and Red Bean Ice-Cream was 32 RMB. Bellagio’s (Nanjing) is at the south end of the 1912 complex, next to Starbucks.