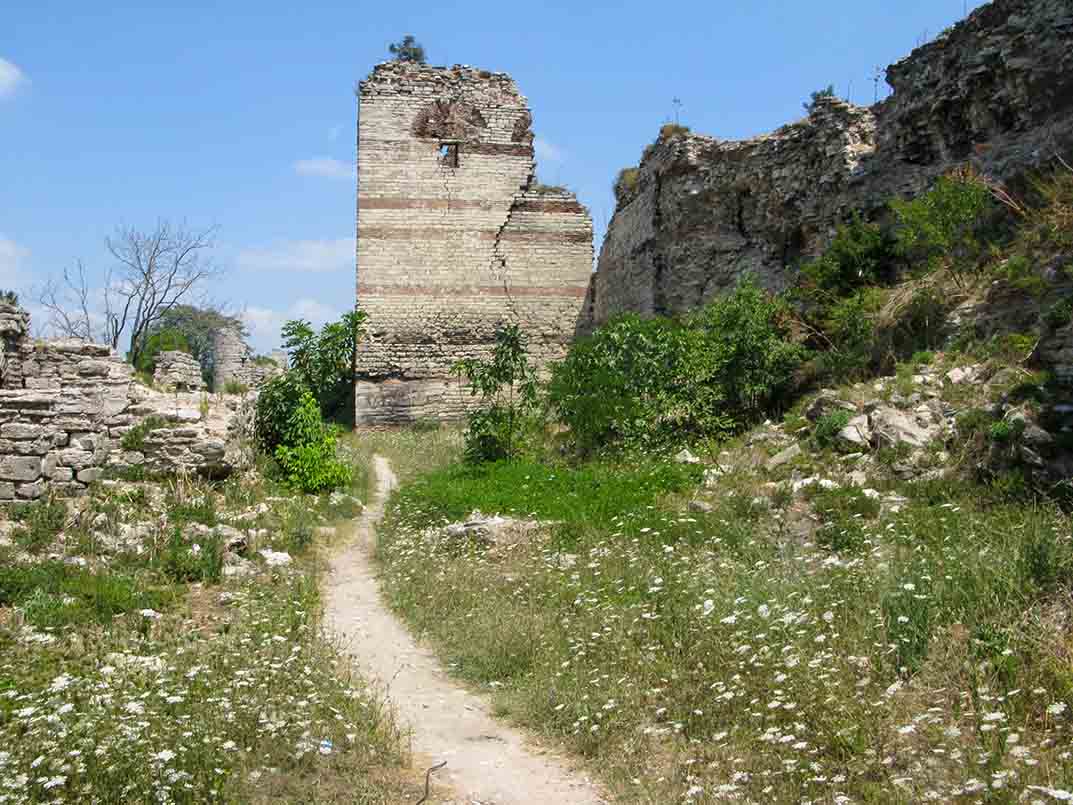 When Emperor Constantine woke up on May 28, 1453, it would have been to the depressing thought that it was likely his last day on Earth. Justinian was emperor of the Roman Empire (we tend to call them Byzantine, but they thought of themselves as Romans), although at this stage it wasn’t much. The Ottoman army had besieged Constantinople for several weeks and the Roman Empire was now effectively defined by the city walls of Constantinople (today’s Istanbul).

My route around the walls of Constantinople (red line) on GoogleEarth map.

When I woke up in Istanbul 563 years later, my thoughts were ‘coffee’, and how I was going to spend the day walking the 19-odd km right around the line of the Constantinople walls (I’ve also walked the Nanjing city walls). I’d given up on Starbucks, one of my old haunts – they’ve taken away their outside tables. But just opposite, there is this great new place called the Simit Cafe. It has an upstairs with a balcony. And if you get a table on the edge of the balcony, you get a view up and down Divan Yolu. This is the main street of old Constantinople and goes back to Roman times.

After a latte and some breakfast, I headed off to a suitably symbolic place to start the walk – the Aya (Hagia) Sophia. This cathedral is almost unchanged since its construction in 537AD. It was already more than nine hundred years old on that fateful day of 1453. From the Aya I hung a right, and followed a wall that runs down to the Bosphorus – and to remains of the outer sea wall. Once at the coast I turned left (north) – to do the circuit anti-clockwise. This soon brought me to the bridge over to Galata. This was the part of Constantinople built by the Genoese. They were friendly with the Ottomans, and had a ring-side seat to view the siege just across the water.

The Galata tower in the distance over the Golden Horn.

I’d made a wee error – I was in my tramping boots, but with thin socks. Sliding around in my boots meant my feet would be a mess of blisters very quickly. However, this part of Istanbul is the clothing market, so I detoured into its alley ways to find some thick socks. This turned out to have all the signs of becoming a drama, so I settled on another pair of thin ones. I understood the price to be just 10 Lire (about $3.20), and then found out I’d bought eight pairs. Take ’em or leave ’em… But a couple of layers did the job.

A section of old wall along the Golden Horn.

There isn’t much of the wall left as you walk up the edge of the Golden Horn. Fragments of the wall appear here and there, incorporated into more recent buildings. But then I wandered into the Fener district. This was a discovery for me. I stepped away from the roar of traffic and into secluded streets lined with weathered and often apparently derelict Ottoman era buildings. Many of these had been resurrected as antique shops – and cafés. I sat at an outdoor table of the Maide Cafe for another latte, as groups of be-hijabed young women from one of the Gulf countries roamed with their cameras.

From Fener I ambled on north, eventually reaching the ruins of the Blachernae Palace. This is where the land wall starts. From the Golden Horn coast, it runs down to the Sea of Marmara. Both sides, Ottoman and Roman, were well aware that this was the weak point – especially the slightly lower part, mid way along, where the wall crossed the Lycus Stream. To compensate for this natural weakness, there were actually two walls, and beyond that, an (initially) very effective moat.

The narrow area between the two walls became a killing-zone. Roman defenders entered it via gates in the inner wall – and were locked out. It’s where they fought and died, there was no retreat. And until very late in the battle, any attackers who made it this far, got no further.

Looking south along the land walls of Constantinople. This was the killing zone between the two walls.

Much of the remaining walls of Constantinople go back to the fifth century, but there were various repairs over the thousand years before the Ottoman attack. There were apparently few repairs after they took over, but there have been extensive recent ‘restorations’. I am hugely fascinated with the walls – looking at the various styles of construction, the repairs, and like an exercise in geological stratigraphy – trying to figure out in what order modifications were made in. I also have a (perhaps morbid?)  interest in identifying what damaged parts of the wall can be attributed to the Ottoman canons of 1453, or to earthquakes, demolitions, or the simple ravages of time.

The walls off Constantinople – a stratigraphers delight!

By May 28, 1453, the Ottomans had been pounding away at this stretch of wall for weeks. By this date they were focusing their fire power on three stretches, and had considerably destroyed these parts. The over-night make-shift repairs thrown up by the Romans could not hold back the tide much longer. The walls around the Lycus Stream are almost all gone – but there are several large, fallen chunks that are probably debris from the 1453 battle .

The walls of Constantinople. This is where it all happened. The zebra crossing is more or less the course of the Lycus stream. Some of the inner wall has been partly reconstructed, but the big blocks of wall just behind the zebra crossing are probably original canon damage from the Ottoman attack.

Further south along the land walls, the moat is now filled in and used as a series of intensive, inner-city vegetable and fruit farms. There was a young chap selling very ripe figs on the edge of the footpath. I asked for one and understood the price to be five lire (about $1.60). It seemed worth it to me, and I handed it over – and got half a shopping bag full. Take ’em or leave ’em…

The walls of Constantinople south of the Lycus Stream. The old moat has been filled in and now the site of gardens.

South of the Lycus there are a few places where I could access the walls and actually walk among the ruins (see the featured image. These areas are of course, surely unstable, so understand the risk if you do it). This was an amazing part of the walk, and there were some huge blocks of fallen wall which probably dated back to Ottoman destruction.

The walls of Constantinople – this is probably original canon damage from the Ottoman attack.

In their wonderful book ‘The Walls of Constantinople AD 324-1453’, authors Stephen Turnbull and Peter Dennis caution that walking the entire length of the walls “should not be undertaken taken lightly”. Good advice, but they also note that the wall in places passes through very unpleasant looking areas of the city, where a visitor is regarded with suspicion”. This may have been the case in 2004, when they published their book, but I never had the sense of being anywhere like that. The odd persistent Turk jerk is par for the course. But if you are concerned, remember you are in a Muslim country, so will be far safer than many other parts of the world. There is a real danger, and its not less salubrious neighbourhoods – its traffic. The route along the Sea of Marmara is currently awful. Not only has most off the wall been obliterated, but you are simply walking along a motorway. Due to current development, there are places where the footpath simply vanishes and I was funneled onto the road and into in-coming traffic. Whoever is in charge of Istanbul public works needs their collective heads read over this one. That part of the walk really is tedious. Many times I thought how nice it would have been to actually get over to the actual coast – but to cross the road just wasn’t an option.

Where did my footpath go?

Finally I reached the ruined Bucoleon Palace (829-842 AD) which sort of made up for all the traffic-hell. From there is was just a few hundred meters before I completed the whole circuit. I turned back in and made my way up to a restaurant for dinner and a beer.

Ruins of the Bucoleon Palace.

I got back to the Aya at about 6:30. At around this time 563 years ago, Emperor Constantine was attending his last service inside. Then he set off west towards the land wall to join the fight. He probably headed along the Divan Yolu that I was now following back to my hotel. Some time that night, he vanished in the mayhem of battle. His body was never clearly identified. The Ottomans broke through the wall and poured into Constantinople.

By the next day, the Roman Empire had ceased to exist.