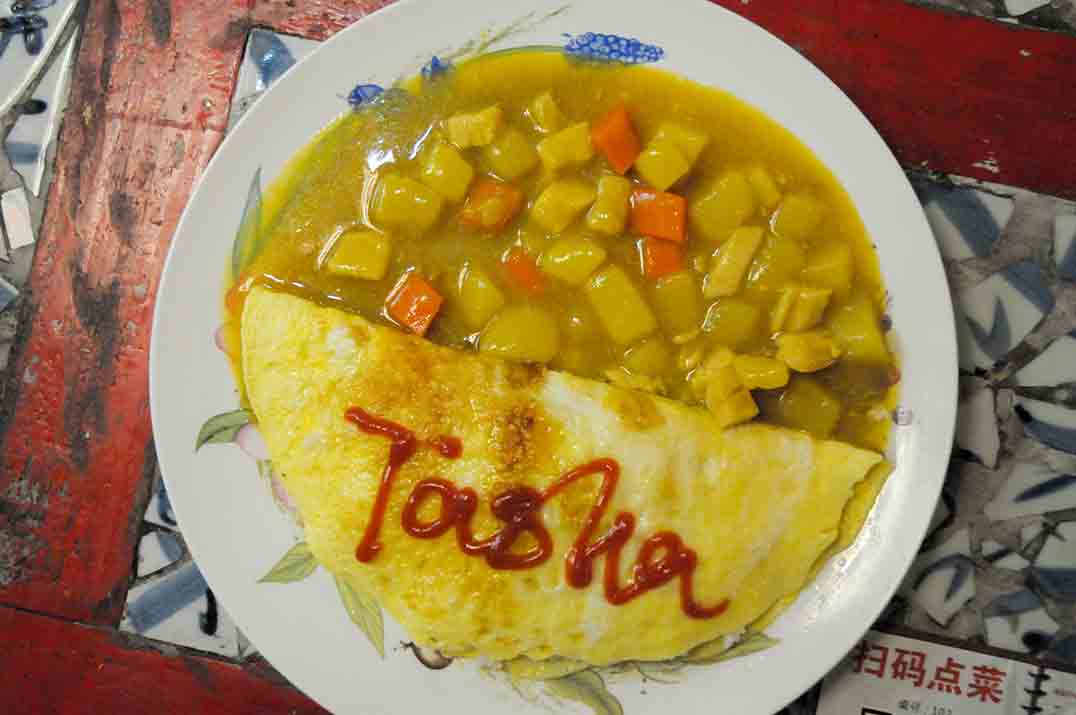 I noticed Miss Tasha when it opened. But for quite a while I kept walking past – I wasn’t sure what it was. It was set back a little off Chenxiang Road, and  had a push-bike, tastefully positioned in the front. But was it a craft shop, or a cafe?  My usual rule called for photos of food in the window. This was a reasonable sign that there would be photos inside, or failing that, I could beckon someone back outside, and point to what I wanted there. Tasha’s had the bike, lots of flowers,  hints of art, but some discrete symbols indicating that coffee and food of some sort was inside.

The outside of Miss Tasha, Nanjing.

One evening I gave it a go. The immediate impression was – stuff. Lots and lots of stuff. Paintings, ceramics, books, mobiles, covered all surfaces and created even more. It wasn’t a craft shop or a cafe, it was both.

But where were the food photos I could point to? There were some menus on a chalkboard, but entirely in Chinese. No-worries – the waitress indicated that I merely needed to scan the QR image on the table. Well, Nanjing has a population of nearly 4 million, and I’m probably the only occupant who doesn’t have a smart phone. This doesn’t mean I’m not smart though. Oh-no! Only a couple of weeks before I had finally uploaded a QR scanner to my iPad. If I’d tried to use that, I would have found out that, for perhaps only the second time ever, I’d forgotten the iPad back in the office. But at that moment, a waiter brushed past with a stack of dirty plates. I pointed at one, and said I’d try that. Or rather, whatever it had been….

The kitchen/counter at Miss Tasha, Nanjing.

It was a curry, about 30 RMB. A bit more than I would have paid in a ‘normal’ place. But Tasha’s is not normal – it is, as far as I can see, utterly unique in Nanjing. The artistic taste and attention to detail is leagues away from anything else. The extra cost is well worth the ambiance. But what an almighty job keeping the place clean must be. The air quality in Nanjing is no where near as bad as Beijing, but it’s bad enough. All those little things will collect dust.

Oh well, there is clearly huge personal passion gone into the concept of Miss Tasha. It’s a very pleasant place and a welcome addition to Nanjing eateries. I hope it works out for Tasha.