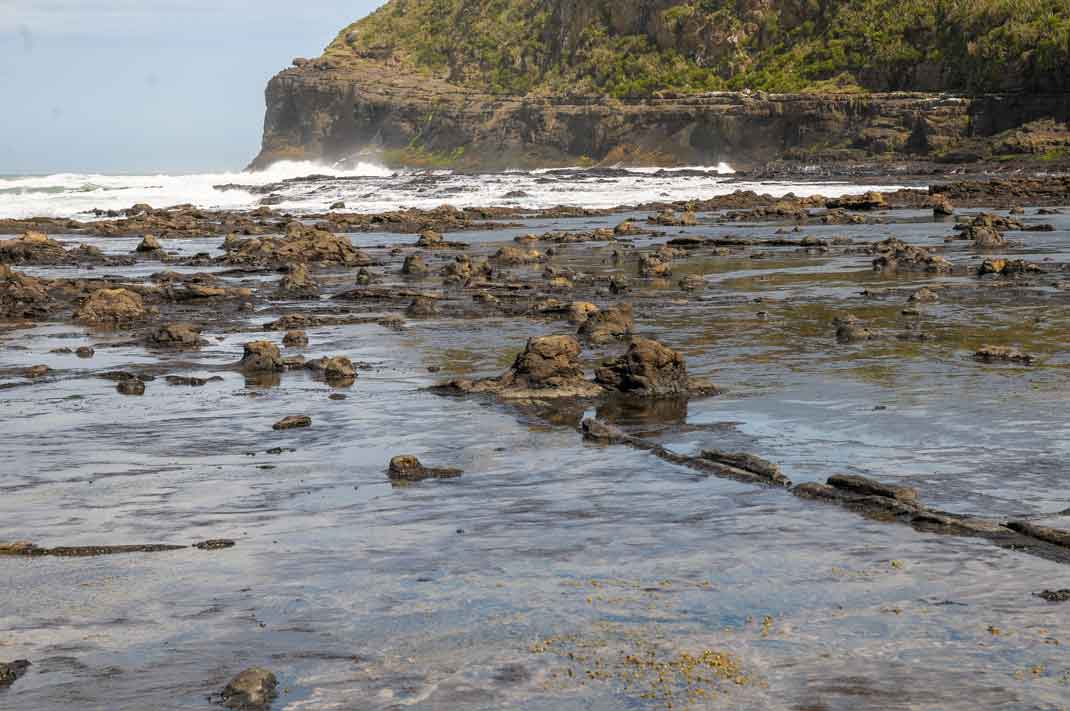 In the Jurassic you could have walked from what is now the fossil forest at Curio Bay in southernmost New Zealand (see featured image), to Australia, or Antarctica. Both continents were then part of Gondwana, and Curio Bay was somewhere near Gondwana’s coast. Did dinosaurs travel as freely, and would they have roamed the forest?

New Zealand has produced just a single Jurassic dinosaur bone (from the North Island: Molnar et al. 1998), but as it is a probable theropod – a carnivore, we can assume that there were also herbivores that it preyed on. New Zealand clearly had a dinosaur fauna then. Jurassic dinosaur fossils are also known from both Australia and Antarctica, although also somewhat sparse (e.g. Long 1992; Thulborn 1994; Hammer and Hickerson 1999; Nair and Salisbury 2012).

The lack of an ocean between New Zealand and the rest of Gondwana, meant there was nothing physically to stop those Australia and Antarctica dinosaurs also ranging to New Zealand. But what about the environment? Curio Bay may have lain in polar latitudes in the Jurassic – and the peculiar environment this would have entailed – of long summer days and long winter nights, may have been an important constraint. Based on what is known about the Australian Cretaceous, these odd conditions might have produced a distinct ‘polar’ dinosaur fauna (Rich and Rich 1989; Benson et al. 2012) – but not precluded one altogether.

However, those Antarctic and eastern Australian dinosaur localities themselves probably formed close to the Jurassic Polar Circle, and so perhaps the very same fauna extended to New Zealand. In that case, the Curio Bay forest may have harboured such species as the theropod Crylophosaurus (known from Antarctica: Hammer and Hickerson, 1999), or the sauropod Rhoetosaurus (from Queensland: Nair and Salisbury, 2012).

But if dinosaurs did roam the Curio Bay fossil forest – where are their fossils? No trace has yet been found. I suspect there are a few things counting against finding them there. One is that they would be very hard to spot in most of the rocks at Curio, and especially to distinguish from fragments of wood. In addition, plant material and bones tend not to go together, as the plants make conditions acidic, which will dissolve bones. So is there any hope?

I think the best chance of Jurassic dinosaurs in the area will be as footprints, and probably most likely will be spotted edge-on (this has already been claimed for New Zealand’s Late Cretaceous; Browne 2009). At Curio Bay, the general geology of alternating coarser (and probably firmer) sediments, with finer but forested soils would act against footprints either forming or preserving. However, there are other outcrops of Jurassic rocks along the coast which might be better prospects, and where careful searching may pay-off.

On North Head (visible in the distance from Curio Bay, across Waikawa Harbour) there are strata that may have been deposited on a low, marshy delta, where it interfingered with the sea. In other parts of the world, this type of environment is prime dinosaur footprint ‘country’. In one horizon on North Head there are several irregular, blob-shaped masses of coarse sandstone – coarser than the sediments that surround them, that extend down into the lower layers.

They remind me – in the Morrison Formation of the USA I once saw a cliff – a perfect slice through several stratigraphic layers, that preserved where a dinosaur had stomped across a wetland. The cross-section of each foot print formed a downward bulge into the sediment layers. The prints were weathering out as foot-ball sized lumps of sandstone, complete with three toe-impressions on the bottom. There were two of us kiwis at the outcrop on a field trip, hell-bent on finding one such souvenir. We were unlucky, or perhaps just clueless. Just before our bus left, the field trip leader ambled up to us, casually bent down and picked up a perfect specimen, before telling us is was time to move on.

But ever since then, I’ve been on the look-out for cross-sections of foot prints. Are they what I’m looking at on North Head? As we like to say these days, it’s probably a case of: “Good luck with that one”. Trouble is, deltas are also prime sites for what are called ‘load casts’. These can result when a flood of denser sediment pours over wet, less-dense sediment. Gravity causes blobs of the heavier stuff to push their way down, while blobs of the sloppy lighter material push up. There are certainly cases of wet-sediment deformation on North Head, but this particular one looks a bit different. They are most likely going to be load coasts – but then, I wonder how many cases of assumed ‘load casts’, are actually dinosaur footprints? And then there are also other odd structures in sediments that are neither footprints nor load casts – but have been argued to be dinosaur burrows (see Martin 2009 for examples from the Australian Cretaceous).

Wet-sediment deformation on North Head. Slumping has convoluted the bedding within this sandstone.

So did dinosaurs roam the Curio Bay forest? I would be astonished if they hadn’t. Are what I found dinosaur footprints, or just a sedimentary structures formed by some sort of abiotic process? Jury out there.  Somebody with more experience in either field could probably tell immediately, but if they aren’t footprints – I figure it’s still the place to look…

Long, J. A. 1992. First dinosaur bones from Western Australia. The Beagle, Records of the Northern Territory Museum of Arts and Sciences 9: 21–28.