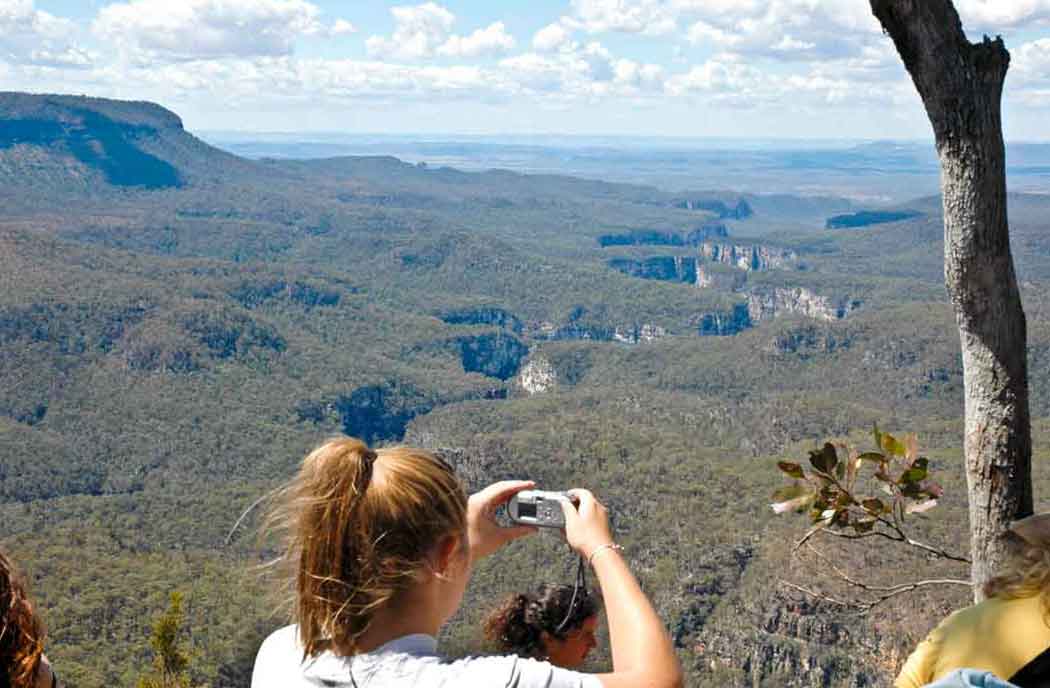 Over ten years ago I taught visiting American classes at the University of Queensland. The itinerary of one lucky class was to be taken to a remote location for what was a pretty genuine ‘wilderness experience’. It was located on the ‘Youth Enterprise Trust’ property on the boundary of Carnarvon National Park. When I joined the programme, the trip was billed as time-off from the otherwise intensive academic course. There was to be no assessment.

My first trip concerned me. We headed out of Brisbane around 0700 for our gruelling 12 hour bus drive. Our driver began to give the odd commentary about features along the way – until silenced by a voice from the back of the bus “Can you tell the bus driver to shut-up, we’re trying to get some sleep!” Later, sleepy-time possibly over, the first of the videos came on – and howls of indignation if anyone dared pulled the bus curtains to peer outside – the burst of light making it hard to see the video.

We finally headed into a densely forested region, dotted with prominent hills, and bounded somewhere in the distance, by the major feature of Carnavon Gorge. The landscape was crossed by a few dirt tracks and otherwise very few signs of human development. From the homestead where our bus parked, we were driven further into the bush by a variety of smaller vehicles. Camp was a collection of basic wooden bunk houses, scattered through a grove of extremely old cycad trees, peripheral to a communal camp fire/ meeting area. There was no electricity on site and strictly no electronics were allowed (there was no mobile coverage anyway). Food was cooked with wood ovens and we stoked a fire to heat our shower water.

Our campsite – nestled among a grove of extremely ancient cycad trees.

Over the three days we spent in the bush, there were two main trips; a full day- walk from our camp up to the edge of Carnarvon Gorge (see the featured image), and a bus trip into the National Park from where we could walk around caves with ancient Aboriginal rock paintings and engravings.

It was a fantastic experience, and the students (and myself) were privileged to have it. However, I came back from the first trip with the feeling that very few students had any clear idea where they had been. The lack of any assessment simply meant most students turned-off. It was just one more location on a list.

I didn’t like this approach so on future trips I insisted on one piece of assessment. Nothing was required during the trip, but I asked the students to “Be aware of where you travelled each day. Where was it in relation to the camp? What kind of vegetation did you see? What geology? What land forms? Where was the rock-art?”On the final day, as they boarded the bus for the long drive back to Brisbane – they were each to hand me a hand-drawn map (spread over two pages). This was to be a “diagrammatic, annotated map, summarising the ecology of the … landscape”.

The idea was that, rather than get in the bus and sleep until you arrived ‘somewhere’, or walk with your head down, zoned-out, and focussed on the boots in front, you actually had to try and remain aware of where you were, how your trail was twisting and turning – and try and recognise key features of the landscape to keep your bearings.

I tried it on myself one trip. Based on my own reading of the landscape, returning from our bus trip to the National Park, I was pretty sure that if I hoped off at one point, and headed through the forest on a fairly straight line – I would eventually make it to camp. I did, but, I’ll admit – it wasn’t without some angst. It’s so, so hard to walk in a straight line through a forest. A little voice soon starts whispering in your ear – pressuring you to veer off a little bit to one side of the other. It’s the classic case of walking in circles. It takes a lot of willpower to simply go straight. Inside the forest you can’t see the sun, or any landscape feature to guide you.

In retrospect, there was a little cruelty in that assessment – I recognise this now whenever I’m in the Northern Hemisphere, and struggling to work out which way is north. From somebody who grew up in the South, with the sun in the north at mid-day, It’s not easy, and it really makes you think. And that of course, is the point.

Late on the last afternoon of each trip there was a twenty minute walk up to a ridge behind our camp. When I started to round students up for this, a few just didn’t get it. “Do we have to?” (Answer: “No”), but most took the opportunity. From the top of the ridge there was a wonderful view out over miles of stunning landscape. As the sun neared the horizon, we could sit, chat and point out over the forest, try to work out where we had been and tie everything together.  “There’s that distinct ridge that we drove past way over there, those Aboriginal caves must be just on the other side…” That sort of thing.

The view from just above our camp. It was a great spot to get a birds-eye view over the country we had been in.

On the final morning, gear was stowed on the bus, farewells made to our hosts -the Hancock family and their staff, and those maps were handed in. They ranged from perfect examples, to full essays connected by a few lines. But the actual results didn’t really matter that much. To me it was a broadly successful outcome – the exercise automatically had everyone taking notice of their landscape. Now I make no claims that this particular assessment was anywhere near perfect, it wasn’t. However, I think I was on the right track. Had I had stayed longer, I would have worked on improving my approach at better communicating what I was looking for to the students, and becoming better aware myself that not everyone thinks visually like me, and learning how to deal with it.

A perfect spot from which to gain landscape awareness…

Recently I was reminded of this exercise – following George Monbiot’s enthusiastic recommendations of Jeremy Lent’s book, The Patterning Instinct: A Cultural History of Humanity’s Search for Meaning’, I bought and read it (Monbiot first cited it as the book he was reading at the moment, then later wrote a blog featuring it).

In Chapter 10 Lent describes the Guugu Yimithirr people of Northern Queensland, Australia. They grow up speaking their own language, which does not use relative locational terms like “in front”, or “behind”. Instead, they use cardinal directions – the points of the compass. As an example, instead of asking someone to “move back” from a table, they would say “move a bit to the east”. As Lent puts is they “automatically know their cardinal directions every moment of their lives”. This is situational awareness par excellence. I’m presuming this is possible when you spend all your life in one area. Surely if a Yimithirr was driven twelve hours away, or flown to the Northern Hemisphere, he or she might be in trouble? Or perhaps not – as Lent points out, they maintain this awareness indoors or outdoors, and in ‘deepest forest of the thickest fog”. But the point is– their very language forces them to be aware.

Reading that chapter of The Patterning Instinct was a double-whammy for me. Just a few weeks before I had finished another book – John Bradley’s ‘Singing Saltwater Country: Journey to the Songlines of Carpentaria’ (itself spurred by reading Lynne Kellys’ book The Memory Code). He described his life among another group of Australian Aboriginals, the Yanyuwa, noting that “all aspects of movement in the Yanyuwa language were dominated by cardinal directions. I was forever sitting west of someone, or someone was looking at me from the east”. Geographical awareness was only the start of Bradley’s problems to learn the Yanyuwa language – everyone he spoke to had to be addressed by a term that expressed their precise relationship to him as an adopted member of the community. “Cousin” was not nearly precise enough. Yanyuwa people are not just constantly aware of their place in geography, but of their place in genealogy as well. Both books were eye-openers to me – to the fact that there are cultures for whom such awareness is fundamental.

Ancient Aboriginal paintings on a rock surface in Carnarvon Gorge National Park. The people who made these probably had an innate sense of direction.

So next time you travel, how about working on your landscape awareness. Could you spend a whole day, even just a morning, only using compass directions? Yes, it will be tough – but you’ll end up with a far better appreciation of your place.