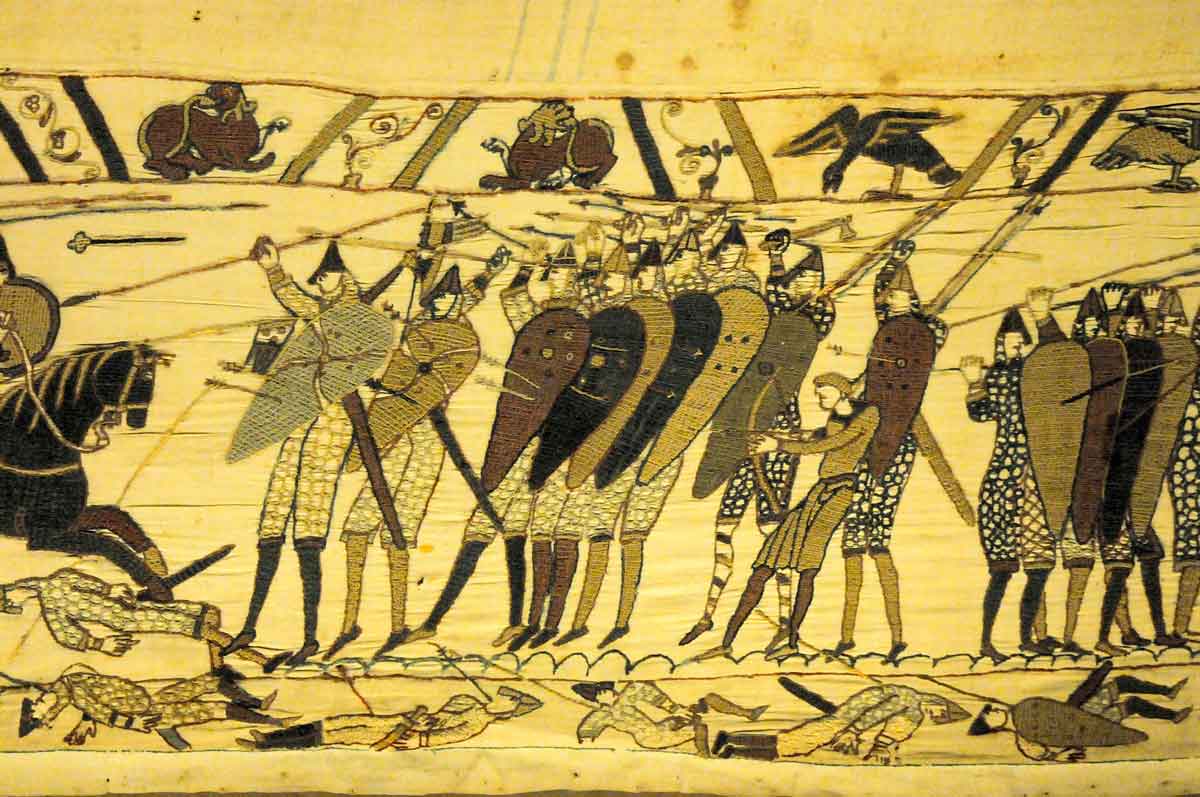 I like to see things for myself. It can give me a sense of place or scale that one doesn’t get from books or the internet. It also gives a chance to spot something new, that whoever might have photographed the original, wasn’t thinking about.

Like most people of generally British Isles background, I was basically familiar with the Bayeux Tapestry. The ‘Tapestry’ is a 900 year plus old embroidered (i.e, it’s not a actually a tapestry!) pictographic record of the invasion of England by Duke William of Normandy in 1066. The ‘Tapestry’ has somehow ended up in the otherwise obscure town of Bayeux in France, and if you are nuts, you can see it (just) in a day-trip from Paris…

When I entered the darkened room, the very first thing I noticed about the glowing Tapestry, was the size. It’s actually quite high, and so long that it’s displayed by curving it around in a tight U-shape. You just don’t get a feel for this size by seeing the usual cropped images in a book.

The other early thing that struck me,was just how ‘blokey’ the whole thing is. The Bayeux Tapestry is overwhelmingly about men. There are a lot of human figures, 626 to be precise, but only three women in the central frame of the Tapestry. One of these is a woman and child escaping a house that is being torched and fits the general graphic story-line.

However, there are a couple more women in the Tapestry margins. And these are remarkably …. different. They are part of naked couples, and drawn in a much more cartoon-like style. When I spotted these, I thought they were so bizarre, that I wondered if they were a kind of 11th century ‘subliminal messaging’. In other words, something so outrageous slipped in among so much ordinary (think of the infamous few frames of something else slipped into movie reels) that 11th century minds couldn’t register it. Well, as it turns out, probably not.

The Tapestry, I automatically assumed, was certainly made by women. This isn’t just a stereotypical sexist comment. Throughout the world, weaving is typically a woman’s specialty (but very definitely not restricted to them, and in some cultures, the reverse can be true). I’m fascinated by weaving myself — but in the Norman world? Surely after the great Boy’s Own Adventure, it’s highly unlikely that the guys sat down with a needle and thread and a cuppa and sewed their story? But assuming it was women who put all the work into it, surely they might have taken the opportunity to put themselves in the picture a little more?

I wandered on down one side of the U-shape Tapestry display – and noticed something about the Tapestry margins. There was a whole lot going on. It was clearly not just decoration, but more like a kind of smaller story line. Perhaps vaguely like one of those simple ‘flicker’ moving cartoons you might have drawn on a pile of cards when you were a kid.

As the Tapestry ‘story’ reads from left to right, the upper and lower margins are full of birds and mythological animals. In this sense, it seems a typical ‘zoomorphic’ style, in the tradition that the vikings and Celts are famous for. Indeed, the apparently random depictions of lively birds and animals continue from left to right — until the Battle of Hastings begins.

At this point in the central frame of the Tapestry, the Norman cavalry have charged with spears (the English were almost entirely infantry), and the very first death is shown in the main frame. It’s presumably an Englishman, lying on his back, impaled by one of those spears. This is where it gets interesting. At the corresponding point in the margin below, there is a clear change in sequence. The bird immediately below the dead soldier, is also on its back, with its feet in the air.

How odd. I hadn’t come across anyone noticing that point before. Clearly I had some learning to do…

Intrigued, I paid more attention to what was going on in that bottom margin (the top margin just continues with lively birds and animals). Following that dead bird, there is a second one, and then suddenly the margin becomes full of images of dead soldiers.

The trail of corpses in the lower margin is then replaced by archers, presumably showing the arrival of this Norman contingent.

And finally, at the end of the Tapestry, the bottom border includes little figures stripping corpses of their armour.

The images in the Bayeux Tapestry have, of course, been analysed to death. Surely someone will have spotted that odd juxtaposition of the dead soldier and bird? I assumed the analysis was out there somewhere, and, after I got back home to New Zealand, I started looking.

Wikipedia stated: “The borders are otherwise mostly purely decorative and only sometimes does the decoration complement the action in the central zone”.

Well, OK, but then I found that the Bayeux bird images had been analysed by Gale Owen-Crocker (perhaps more widely known for her work on Anglo-Saxon clothing) in a 2005 paper with the intriguing title, ‘Squawk talk: commentary by birds in the Bayeux Tapestry?’

Owen-Crocker had noted that abrupt end of bird imagery as the Battle of Hastings began. She wrote: “At several points the birds in the upper border appear to take a keen interest in the armed knights, … but they disappear from the bottom border during the Battle of Hastings”. Intriguingly, she added that the birds “are never seen pecking the dead”.

She noted one instance where birds in the borders are used to convey the emotion in the main frame. This was when Harold was embarrassed and humiliated when he surrendered his sword. The adjacent border birds have their necks tied in knots, “graphically demonstrating the strangulation of Harold’s prestige and ambition”.

Owen-Crocker’s conclusion was that the border birds revealed “a voice or voices different in tone from the main narrative.” She found an analogy with ‘the court fool’, and felt whoever drew the border imagery had a “licence to point out the vanity of human splendour” as well as simply providing “some light relief”.

These curious marginal creatures, she pointed out, are “the most immediate audience of the main frame of the Tapestry” and “variously express curiosity, horror, fear, admiration, imitation and indifference to achievements, and they sometimes diverge from the serious business with a witticism or an idiosyncratic reaction”.

Few of the birds included within the tapestry can be readily identified, and certainly not with parrots. Oh well… maybe there was more about them in earlier, very detailed analyses of the Tapestry, which she referenced, but which I haven’t yet been able to find. However, with perfect timing, out came Arthur C. Wright’s 2019 book: ‘Decoding the Bayeux Tapestry: The Secrets of History’s Most Famous Embroidery Hidden in Plain Sight’.

Wright states right up-front that his specific interest was how those odd figures in the Tapestry’s margins might add to the overall story. It was exactly what I was looking for….

To him, there are three ‘strands’ through the Bayeux Tapestry. One is the central frame of big images. The second is the written commentary in Latin along side those pictures. But the third are those images in the upper and lower margins. They must all be read and understood to get the whole story.

Those margins, as he wrote: “may play upon the main frieze or they may have self-contained, even multiple, messages of their own.”

Expanding on that, Wright wrote: “My perception is that these margins are entirely narrative rather than decorative, that they tell a story throughout. I suggest they provide double-entendres and a sound-track to accompany the superscript Latin running commentary added to the main frieze. The animals and birds provide the sound-track and they also seem at times to speak directly to the viewer, to us.”

Certainly some of the animal imagery represents fables relevant to whatever action was going on in the adjacent main frame. For instance, Wright points out a fox carrying off a hen, representing ‘To the victor the spoils’. Or, more subtly, an image of a wolf confronting a goat. Wright saw this as “the Aesopian fable. ‘Come down to this lush pasture, Miss (English) Goat, for a good meal.’” — reflecting on tactical realities of the battle.

Other images in the margins, of mythological creatures like ‘wyverns’, were interpreted as “weaving falsehoods, spitting bile” and represented “whisperers against [William’s] authority and doubters.”

That was fascinating — so that weird stuff going on in the margins was very well-known. But the real bombshell was Wright’s conclusion:

“I think that there can be no doubt that these artisan embroiderers were men, not women”.

One of Wright’s fundamental arguments is the level of technical detail indicated, of things like ships, armour-types, and how horses react in battles. It is so good that it strongly suggests embroidery by actual veterans of the war (very, very unlikely to have been women — in this case!). Another is that the embroidering technique, as impressive as the whole thing is, is just not as good as if it had been done by women. His suggestion is rather, that the Bayeux Tapestry was made by those with first-hand experience, in fact, possibly by invalided (after a good whack on the head) soldiers.

Isn’t cognitive dissonance delicious? It’s a one of the huge benefits of travel (and reading). On top of the list of things I gave at the start — there’s the chance to get some of your deeply-held preconceptions walloped. If you stay at home and in your bubble, sometimes no amount of evidence to the contrary will change your opinion. Makes me think of a certain Monty Python skit.

But it still looks like a dead-parrot to me.