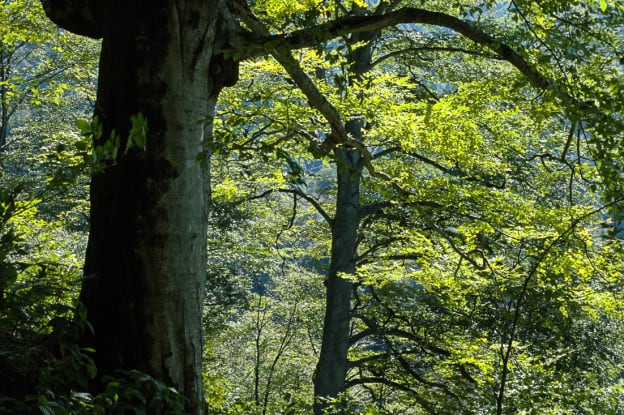 Rainforest in Georgia? (as in Georgistan, Black Sea, by the way, not as in ‘Good-Old-Boys’). I saw it marked on a Wikipedia map and it seemed like a damned good excuse to go and have a look-see….

Some background: The word ‘gorgeous’ is reputed to stem from Georgian women. Evidence I gathered supports this, from the passport control officer onwards. The origin of the word “Georgia” itself is a little less certain. Some say it comes from a local word for ‘wolf’, while others claim it has a much more prosaic ancient Greek origin, who labelledthe inhabitants as ‘farmers’ (same ‘geog’ as geography). My own two cents worth asks why, of all the people around them, would the ancient Greeks have singled out the Georgians as ‘farmers’? It’s one, and likely was then, one of the wildest, unruly places on the planet! The Greeks certainly came to the Georgian coast – they were all around the Black Sea. The legend of Jason and the Argonauts (unruly pirates themselves) and their search for the ‘golden fleece’ had its origins here. Persistent winds blowing off that same Black Sea means that western Georgia has one of the highest rainfalls in Europe. Well OK, there is some debate there – depending on your definition, Georgia is part of Europe, or at least a ‘gateway’ to Asia. I travelled to Georgia after arranging a personal guide/driver through Explore Georgia (highly recommended). I entered via Turkey and spent my first night in the coastal city of Batumi. Next day we headed up into the mountains where my guide had arranged a lift with a heavy truck taking some locals up to collect wood. Despite the usual weather, my day was cloudless (damn -it’s no good for photographing in the forest!). Our route was a deep, entrenched track, and our truck made a hard job of it. We wound up onto a ridge, eventually seeing the snowy Caucasus far in the distance. And finally it was ‘good’forest – heavily cut-over, utilised forest – but something more ‘natural’ would have been much harder to get to. For a brief visit it did just fine.

Our truck, and a very, very deeply entrenched track.

The view back over Batumi.

The snow-covered Caucasus in the distance.

Evergreen shrubs below the deciduous canopy. Rhodendron and holly.

When Alaback (1991) applied this definition to the world – he found that four European areas were included: the northwest corners of Ireland and Scotland, the southern tip of Norway, and a small region of the Alps. A map of temperate rainforest in Wikipedia  claims to follow Alaback (1991) but uses a somewhat different definition:

The Wikipedia map gives a slightly different distribution of ‘temperate rainforest’. For example, now all of Ireland is included, the north coast of Spain, the central Alps spot has moved south into the Balkans – but there is now a solid arc around the southeast Black Sea coast, including Georgia. Actually, in detail, either of these climatic definitions results in some parches of ‘rainforest’ in western Georgia. As long as definitions like these are seen for what they are – drawing attention to areas with a comparable climate: i.e very wet, ‘everwet’ and cool, then then I have no problem. But the forests in these areas cannot be distinguished from those lying just ‘outside’ (i.e., slightly drier or warmer). The line is artificial. Floristically they do not contain any of the evergreen Lauraceae family- which are distinctive elements of the ‘Laurisilva’ rainforest of the Canary Islands, or which are prominent components of fossil assemblages of rainforest in Europe. In fact, the Georgian ‘rainforests’ have no broad-leaved evergreen trees (there are evergreen pines), although there is an evergreen shrub layer and some evergreen vines (Filibeck et al. 2004). Fire seems to be more or less absent, certainly not a part of the ecology – so by some Australian criteria, that could make it a rainforest. Basically, take your pick. If it’s forest where it rains an awful lot – then yes, the Georgian forest is rainforest. But whatever the label, the forest is now a fragment of its former extent. It’s precious. If you ever get the chance, go there and show your support. Georgia is well-worth a look.