Cut back to the late 1970s – I was a schoolboy and had found my way into the Burnside Marl Pit, Dunedin (southern New Zealand) and up to the unit of greensand that is exposed on the hill side at the far end. Greensand is an accumulation of grains of the mineral glauconite. This green substance forms on the sea floor, only in areas that have very low rates of sedimentation, even negative ones. Often the only sedimentation in areas where glauconite is forming  – is the rain of dead organisms that falls down from above. This makes it an ideal place to find fossil sharks teeth for instance.

The layer of greensand at Burnside is called the Concord Greensand, and it can be correlated with similar layers of greensand right up the east side of the South Island. It often separates two bodies of limestone.  The east coast preserves  a remarkable series of rocks that record the sea gradually encroaching across the land from more than 65 million years ago (from the east), to a point in the mid Cenozoic where a lot of New Zealand was under water, and what remained was evidently of very low topography. Following this, as hills and mountains started to grow, the process was reversed, and the shoreline expanded back to the east.

I certainly always understood that the unit of greensand correlated with maximal submergence of New Zealand. Maximal submergence is the point of highest relative sea level rise. With little land to erode, and what there was very low-lying because of years of erosion, that was the time of least clastic sedimentation. It seemed to make sense, but as it turns out, things are a lot more complicated. Maximal submergence may have been sometime later, the greensand overlies a break in sedimentation, and the formation of the greensand may have been either coincident or close-to, a large global sea-level drop.  Something of a paradox then.

Attention was focussed on the greensand by Carter and Landis (1972), two geologists in the Geology Department of the Otago University. The broader academic context was a world in which plate tectonics had been accepted for many years and there was now an extensive deep-sea drilling programme that was revolutionising the understanding of ocean sedimentation. A critical finding was the realisation that there were extensive areas of erosion extending across deep and shallow water as a result of strong ocean currents (Watkins and Kennett 1971, 1972). Oil company geologists had also proposed that there was a coherent global history of sea-level rises and falls driving cycles of sedimentation (Vail et al. 1977; Loutit and Kennett 1981).

Carter and Landis (1972) claimed that the base of the greensand was essentially a single unconformity (although it possibly bifurcated in places) that could be correlated, not just up the coast of the South Island, but to Australia and perhaps beyond. They named this the Marshall Paraconformity after Patrick Marshall, who was professor of Geology at Otago in the early 20th century. They interpreted the Paraconformity as part of the bigger picture – the development of the modern Circum-Antarctica Current (West Wind Drift) that meant strong ocean currents scoured their way across the continental, but submarine parts of New Zealand. A “more detailed account”, Carter and Landis promised, was “in preparation”. On the strength of that, they scored a Nature paper of just over a page.

Exposed surface of highly burrowed limestone (Ototara and a little Otekaiki) on the beach north of Kakanui. This is essentially the Marshall Paraconformity with the greensand stripped off. 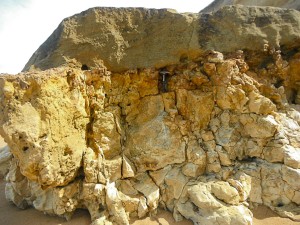 The contact between the Ototara Limestone and Gee Greensand (with a little Otekaiki Limestone in between) visible on the beach north of Kakanui. The contact is the Marshall Paraconformity.

Unconformities became a topic of discussion and a focus of local research to date (e.g. Jenkins 1975). However, the first real data on the Marshall Paraconformity did not come from Carter and Landis – but by Findlay, in 1980, who was less than impressed with Carter and Landis’s concept (Curiously, his paper was nearly eight pages long and oddly classified as only a “Note” in the New Zealand Journal of Geology and Geophysics). Findlay schematised 46 measured geological columns and maintained that the Marshall Paraconformity was “but one of many extensive unconformities” in the region. The key problem was lack of precise dating of the paraconformity and he concluded that it may be “of no more significance to global tectonic, paleogeographic, or paleoceanographic reconstruction than anyone of the many other Tertiary unconformities within New Zealand.”

Carter and Landis’s next paper came in 1982, where, to help clarify some confusion, they nominated a type section in Canterbury for the Marshall Paraconformity. They argued that it dated to the early-mid Oligocene, but that it “may have overlapped in time with the development of at least twodiscrete unconformities on the West Coast”, the upper one being mid-late Oligocene.

Battle-lines consolidated along the Waitaki River. The issue of two unconformites would not be brushed aside, and was central to the attack by Lewis & Belliss (1984). They clearly laid out the case for two unconformites – perhaps both being angular and the result of tectonism, and maintained that regional sea level change may not have been significant at all. To twist the knife deeper, they argued that even the term “Paraconformity” was inappropriate, as it was introduced to refer to a biostratigraphic discontinuity, where there was an “inconspicuous” sedimentological break involving parallel beds. The Marshall “Paraconformity” (in fact, either uncoformity), was none of these. In particular, Carters referencing of his own attempt to place local stratigraphic terms into a broader system (Carter 1977) definitely got up their noses. Much as I like the system, this does seem to have been a bit of a swifty. It was presented in a field trip guide and not really published for another decade (Carter 1988). In addition, the Lewis & Belliss paper includes some the earliest (the earliest?) documentation of Oligocene paleokarst processes in New Zealand. So even around the time of maximum sea transgression, the limestone had been exposed for a period.

Carter’s counter-attack came in 1985. He reiterated that the Paraconformity marked a significant break in New Zealand stratigraphy between the transgressive, shelf-on-lap sediments below, and bioclastic (including greensand) above and represented a break in sedimentation of at least 3 million years. Significantly, its origin was now seen to result from the regional sea level highstand (despite the apparent drop in global sea level at the time) than oceanic currents resulting from continental movements.

A year later the debate then flared up in the pages of the Newsletter of the Geological Society of New Zealand where Lewis et al (1986) wrote a spirited response to Carter.  They wrote that the Marshall Paraconformity was the subject of “considerable dispute amongst New Zealand geologists.”  Among their complaints was the rather parochial view that this should have been argued out in New Zealand journals before being published in international ones and that “overseas readers” might be “misled” by what Carter had written. Carter was given a response, and he addressed several points, but said he was mystified “as to what all the fuss was about”.

Unconformities became a hot topic in New Zealand (Hornibrook 1987; Jenkins 1987; Lewis 1987) with Gage (1988) entering the fray and claiming that because of the “extremely condensed sequences” correlation between various unconformities was currently not possible – and that the term “Marshall Paraconformity” should be dropped. Putting the boot in further, he claimed even the “attachment” of Patrick Marshall’s name to the concept was “inapt”. He didn’t restrict his criticism to Team Carter and Landis– but also voiced his reservations about the Lewis and Belliss (1984)  interpretation of paleokarst.

A further study on the Marshall Paraconformity  (Fulthorpe et al. 1996) concluded that it correlated with “hiatuses in at least two, and possibly three, offshore exploration wells “ and its date meant that it correlated with the opening of the Pacific sector of the Southern Ocean and a postulated mid-Oligocene sea-level fall  (Haq et al. 1987). They further concluded: “Lowering of base level, coupled with cooling and enhancement of current activity, may have caused the temporary cessation of limestone deposition and a regional hiatus. This hypothesis reconciles the apparently contradictory palaeogeographical evidence for a regional highstand.”  Carter had another chance to promote the Marshall Paraconformity when he was lead author for the results of Leg 181 of the deep sea drilling project (Carter et al. 2004) and then matters then rested until another attempt to clarify the issue came from north of the Waitaki (Lever 2007). She concluded that “the available data show a distinct range of unconformity ages in different basins. In general, Oligocene deposits are condensed, but there appears to be no one time in the Oligocene when unconformities developed everywhere.” And then:

“Unconformities in the Oligocene could be caused by global sea-level falls, relative sea-level high-stand, local faulting and volcanic activity, and oceanic current activity. These causes could have formed both local and regionally extensive unconformities. In successions with only one unconformity surface, that surface may represent the occurrence of multiple unconformity-causing processes, further complicating the unravelling of Oligocene geologic history in New Zealand”

Her final words on the subject, were: “In the meantime, it would be wiser to dispense with the confusing term Marshall Paraconformity in the South Island, as this concept represents an oversimplification of a complex story of multiple unconformity development (Jenkins 1975; Findlay 1980; Gage 1988).”

The following year there was another relevant paper – discussing the Waipounamu Erosion Surface (Landis et al. 2008). Discussion of the Marshall Paraconformity was quietly avoided, but the authors concluded maximum transgression in the New Zealand region was in the Waitakian – perhaps 4-6 Ma later than Carter’s (1985) Whaingaroan-Duntronian boundary date for the Marshall Paraconformity.

And that, as far as I know, is where a more than 30 year ‘controversy’ stands. I don’t have an opinion, I just think it’s a good example of where an argument stimulates a line of work, and eventually the ‘truth’ comes out. Whether or not that is Lever’s conclusion, may be too early to tell.

Hornibrook, N. de B. 1987: Mid-Tertiary unconformities in the Waitaki Subdivision, North Otago-a comment. Journal of the Royal Society of NZ 17: 181-184.

Jenkins, D. G. 1975: Age and correlation of some unconformities in the New Zealand region. Geological Society of New Zealand Newsletter 39: 45-47.