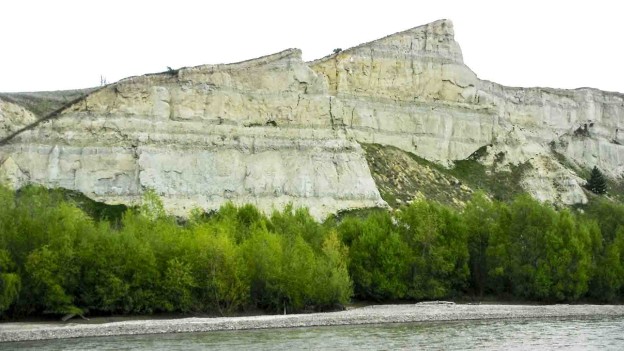 Alexandra lies at the junction of the Clutha and Manuherikia Rivers. The usual translation of the Maori word ‘Manuherikia’ is that it means something like “cry of a tied bird” and records a scout tying a weka (a bird) to a stake to mark the crossing point of that river (Reed Dictionary of NZ Maori Place Names). It’s never seemed that plausible to me – at most times there would be no problem crossing the river. Back in the 1970s an elderly neighbour, Gladys MacArthur told me that an elderly Maori woman had given a different explanation. When the much larger Clutha River was full with brown flood waters, it looked like it was holding back the clear waters of the Manuherika, like a tied bird…

When we were kids, the Manuherikia was the place to go swimming. Upstream of Alexandra, there was the ‘First Galloway’ then the ‘Second’ – the best swimming spot. Between the two is a line of cliffs (see featured  image) with a magnificent exposure of grey/green mud, and slightly rusty sand . It always looked like it should be full of fossils, but disappointingly, it is not. At least of anything you don’t need a microscope to see. It wasn’t until I got to University and met the sedimentologist Barry Douglas, that I found out just what the ‘Galloway cliffs’ are. They are the fill of a giant lake – ‘Lake Manuherikia’, that once covered much of Central Otago. Douglas did his PhD on the sediments of the Manuherikia Group. These include those laid down in and around the lake, as well as river and coal beds that formed before the lake. Up until Barry’s work, there was a general belief that there was a network of small lakes in between the (then smaller) Central Otago mountains. Douglas’s masterstroke was to realise that all over Central Otago, the geological sequence passed upwards from river and coal and the base, to thick lake sediments above. There were even a few remnants of these sediments scattered over the mountains.

Close up of Lake Manuherikia sediments above the Manuherikia River at Galloway. Most of these are slightly rust-stained sands, but there is a prominent dark carbonaceous bed. This was probably a swamp at one of the times when the lake was very shallow.

The inescapable conclusion was that there was one big lake – as it grew, it had flooded over a landscape of rivers, floodbasins and coal swamps, until it covered all of Central Otago – at least. Douglas calculated that at a minimum the lake extended over some 3500 square kilometers (Douglas 1986). That was a lake “without bounds”. The real size of the lake was something in excess of that, as it is not yet known how far it extended, or what kept it from the sea. At the time, New Zealand may have looked something like a larger Chatham Islands – a relatively thin band of land surrounding a central waterway.

Fossil pollen shows that the lake, and the underlying river sediment and coal, is Miocene in age (Mildenhall 1989; Mildenhall and Pocknall 1989; broadly 10-20 million years or so). The lake is likely some sort of response to early movement along the plate boundary that now forms our Southern Alps. At the time, they weren’t around, but towards the end of the Miocene what are now their foothills started to grow -punching  up through Lake Manuherikia (Youngson et al. 1998). The lake was inundated with a great pile of gravel. A whole landscape vanished.

Does anything remain of Lake Manuherikia? In a very tenuous sense, the Manuherikia River itself is. As the mountains pushed up, the lake water was concentrated into rivers, that found their way to the sea. Those swimming holes along the willows, that we dropped into from rope swings, are a sort of ghost of Lake Manuherikia.

Mildenhall, D.C. 1989. Summary of the age and paleoecology of the Miocene Manuherikia Group, Central Otago, New Zealand. Journal of the Royal Society of New Zealand, 19:19–29.