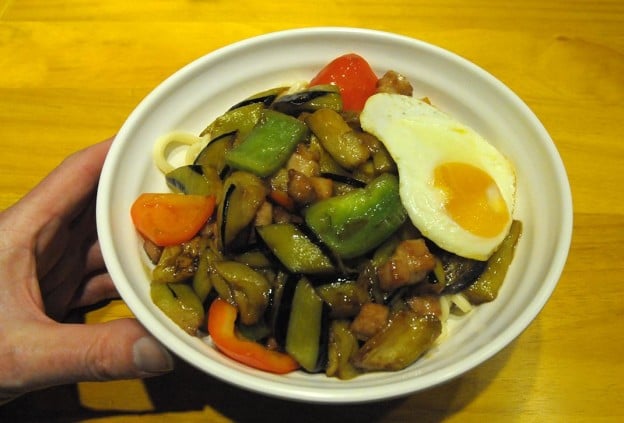 A trendy (the Andy-Warholesque portraits of Mao on the walls are a sort of hint, not to mention the name) up-market (eye-catching menus) sort of place. I spotted this weeks ago, then couldn’t find it again for ages. Just a few of their offerings have an English translation – I’m a big fan of eggplant, so when I saw that, I took a stab. Wow, really nice big bowl (see featured image above, and below, for what it looks like once you’ve mixed it and eaten half). A really big meal for 25 RMB, plus a mug of tea.

I was about to go when the female half of a twenty-somethings couple at one of the other tables asked where I was from. Turned out both her and her husband had been to New Zealand last year – and had got as far south as a place called “Tekapo”. Yep, they got the name right, not far from my home town. So far, they like NZ more than any other country they have visited.

Cool menu! But unfortunately not making it easy to machine-translate….

‘Have Never Met’  is on Zhujiang Road, a little to the east of Jinxianghe.