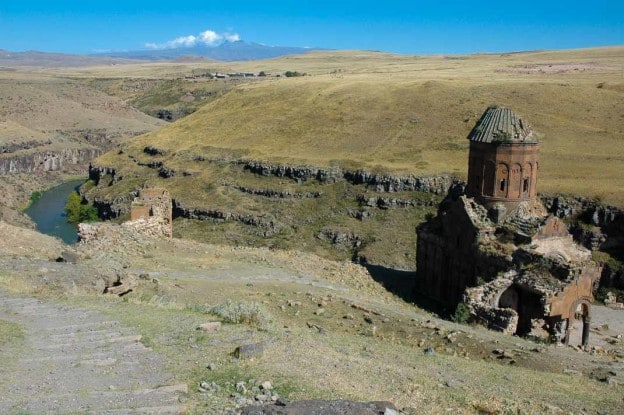 I’ve seen two cities that look like they were comprehensively destroyed. I don’t mean just ruins,  but places where someone seems to have made a comprehensive, and successful attempt to wipe the place out. Warsaw may come to mind – it was practically obliterated in the Second World War, but then it was rebuilt. In Ani, a one-time capital of Armenia, and now in Turkey and one of the places I am thinking of – whatever happened, no one came back.

It was in 2007 and I was in the far east of Turkey. I fell-in with a group of Turkish architecture students who asked me if I’d like to come to Ani with them. I’d never heard of the place, and as it turns out, until that year, it was in a military zone, and off-limits.

Ani is located on bare plateau of steppe – hardly a tree in sight. What is left over an area about 1.5 x 2.0 km are a few larger ruins of building. These are well-spaced, but there are signs in brick and road, that they were once part of a large city. Indeed, in had a population of around 100,000. It all sits on the west side of a spectacular gorge containing the Akhurian River, which eventually  flows into the Caspian Sea. On the other side of that – it’s Armenia. Far in the distance (see featured image), you can see Armenia’s Mount Aragats (Note: it’s not the more famous Mount Ararat, which is in Turkey).

The ruins of Ani.

Ruined and unprotected frescoes, at Ani.

A derelict security fence and watch-towers on the Turkish side were evidence that this was a hostile border in the recent past – but there were no guards, so presumably it was not so now. Around the ruins there were a few explanation signs, certainly better than nothing, but after a few hours I came away not understanding what had happened.

Now that Ani is a little more on the tourist circuit, there is some more information out-there (I’ve put some links at the bottom). The answer is ‘it’s complicated’ – and this might be expected, given where it is. Ani was in one of those places doomed to be a ‘buffer state’. That is, a place between two larger states, just large enough to keep the big ones from each other’s throats. In the early 11th century, the buffer state, with Ani as its capital was Bagratid Armenia.  The big-boys on either side were Christian Byzantium and the Muslim Arab world. Most of Ani’s large ruins date from this time. The power-balance worked until AD 1045, when it became part of the Byzantine Empire, but then shortly later (AD 1064) it fell to Byzantium’s successors – the Seljuk Turks.

The ruins of Ani above the Akhurian River. The old Turkish border-fence is visible. That’s Armenia on the other side.

The Mongols came in the 12th century and an earthquake in AD 1319. So the main destruction is a likely from those dates – and mix of human and natural. But the border was to shift some more, and likely involved more destruction. By the late 19th century the big-boys were Russia and the Ottoman Empire. Russia invaded Ani in 1877-1878, what I take to be bullet holes on some of the ruins may date from then.  But after World War One Russia handed it back and withdrew  to the other side of the gorge.

Mike Pole above the Akhurian River, at Ani, Turkey.

What I take to be bullet holes on the ruins of Ani, Turkey.

From then until 2007 it seems that those responsible for the site couldn’t have cared less (at best). Frescoes that are a thousand years old are open to the elements and the vandals. A few more storms and another big shake will put-paid to the ruins that are left. There have been some rescue attempts since then. But what at one stage might have rivaled Istanbul as a tourist-attraction, now sits forlorn, on the other side of the border from what little remains of Armenia.

The other destroyed city I saw? A Russian military city in Mongolia. But that’s another story…

Links to information about Ani

On a Hotly Contested Border, a Ruin Gets Its Due : EthnoTraveler Magazine

Ani, the lost capital of the Armenians and the road to Tbilisi

The Ancient Ghost City of Ani — In Focus — The Atlantic