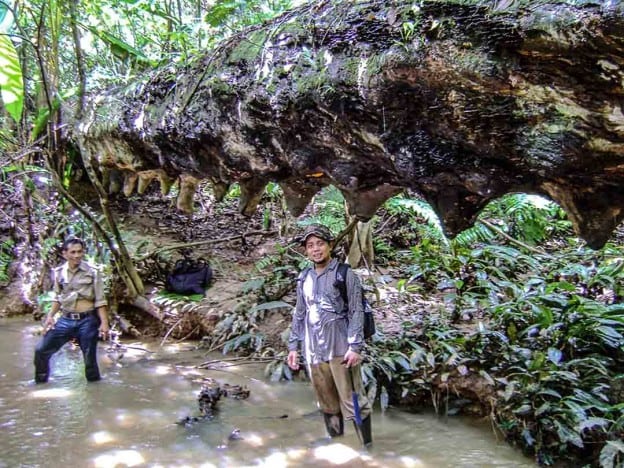 I was sitting in a ger in Mongolia when I put up my hand to go to Indonesia. My ulterior motive was to get a chance to get into the Indonesian rainforests. Back in 1988 I had read Eric Hansen’s book “Stranger in the forest: on foot across Borneo”. I was impressed. The guy spent weeks under a forest canopy–walking across Borneo, and back again. It was wild place in those days.
When I did get to Kalimantan (the Indonesian part of Borneo) twenty years later, I found it was pretty much all over. I was there a month before I even saw a patch of intact forest– and that was far up in the high country near the Sarawak border. And even there it was surrounded by old logging coups. But on my last stint I kept seeing some trees, obviously from the original forest, towering up above the shrubby regrowth, rubber and banana trees that come after logging. They had a regular series of bumps up their trunks, and had obviously been avoided by the loggers.

A relict honey tree in Kalimantan, towering above regrowth after the surrounding rainforest has been logged. Inset shows detail of the trunk, with its row of spikes to allow people to climb up to the bee hives.

One day, while I was plodding up a forested stream with my guys and some of the locals, the story came out. It was steamy-hot, and walking up the streams was both the easiest way to get through the jungle, and the coolest. We came across one of these giant trees which had fallen right across the stream (see the featured image). There was a lot of sniggering about the shape of these bumps – and then my Dayak guides explained to me that this was a ‘honey tree’. The bumps were formed by outgrowths of the honey tree around pegs of ‘ironwood’, which had long-ago been driven into the honey tree–to allow people to climb up into the canopy, and get honey from bees nests. These trees were favoured places for bees to make hives.

The bumps on a fallen honey tree.

The original iron wood spike (left) emerges from its covering of honey tree, to start a new life as a chick-magnet.

But that wasn’t all. The fallen tree was beside some rock I had to look at–and while I was doing that, I saw my guides using their parangs (machetes) to hack off some of the lumps. When I asked what they were doing, something else finally came out– the old pieces of iron wood, extracted from their overgrowth of honey tree, and perhaps 300 years old, were now charms – to pick up
chicks! Something about the shape of the lumps links them to females – and sympathetic magic comes into play. And furthermore, I was told – they worked “just as well on ex-pat girls as Dayaks”!

A row of spikes on a still-standing honey tree.

Spikes make their way up into a honey tree.

Unfortunately these trees are both botanical and cultural relicts. They were left by the loggers. My guess is the local people said ‘enough is enough’. Log what you want – but don’t touch our honey trees. But after all that, no-one climbs the honey trees any more. You certainly can’t buy local honey tree honey on the village markets. There are now easier ways to get honey. I was later taken to a still-standing honey tree which was visited by two men in 1978. One climbed, slipped, and fell all the way out of the canopy, dying on the buttress at the base. His mate is still in the local village.

The buttress on which one of the last Kalimantan honey tree climbers met his death on, in 1978.