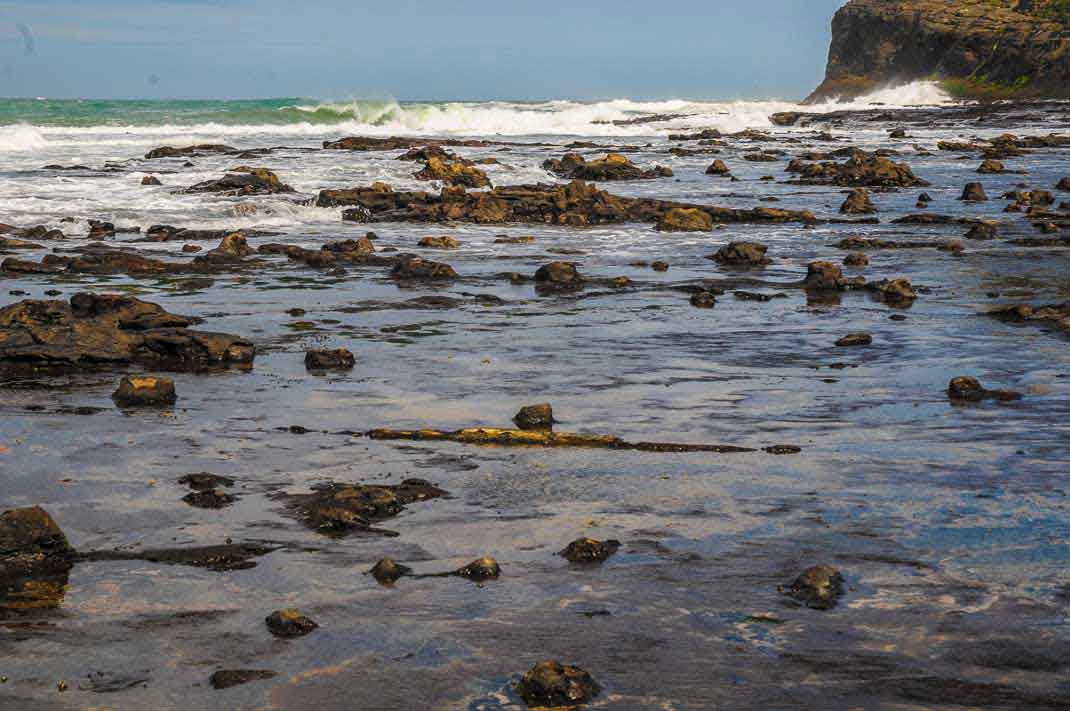 The Jurassic fossil forest of Curio Bay today lies almost at the southern tip of New Zealand’s South Island. In the Jurassic, you could have walked from Curio Bay to what is now Australia and Antarctica (Dinosaurs may have done just that). We know from Tasman Sea and Southern Ocean sea-floor data that the western edge of the New Zealand continental was once firmly against both of those places. They in turn were part of the super-continent of Gondwana. The Curio Bay forest lies within a slice of rock (the Murihiku Terrane) that during the Jurassic, lay somewhere along the edge of Gondwana.

A penguin walking through the Jurassic fossil forest at Curio Bay, New Zealand. Can you see it? (:

One of the key pieces of evidence behind understanding that there was a Gondwana, is the field of paleomagnetism. Broadly speaking, when molten rock like volcanic lava are produced and then solidify, magnetic particles within them are frozen into an orientation aligned to the Earths magnetic field. From this information, the direction to the Pole and the paleolatitude can be determined. There has been a lot of paleomagnetic work carried out across the landmasses that once formed Gondwana, and they all point consistently (as they should, if they were all part of a single continent) to a location of the Jurassic South Pole off the coast of Gondwana – very broadly where New Zealand is today.

Taken at face-value, this information suggests that what later became New Zealand, lay at about 80°S – in other words, only 10° from the South Pole. This was well within the Polar Circle (at about 66°S) where there is continuous daylight during summer, and continuous night over winter. But is this the latitude at which the Curio Bay fossil forest grew?

The 80°S paleolatitude only holds for the old ‘core’ of New Zealand to the west- what is now parts of Fiordland and north-west Nelson. However, the land that the Curio Bay forest grew on – the Murihiku, was only loosely connected to that core. Since the Early Jurassic, the Murihiku slice has slid some distance around the edge of Gondwana. It doesn’t quite ‘fit’ with what is now the core area to the west. There are serious geological breaks in-between, and the cobbles in the rivers that flowed near the Curio Bay Forest don’t easily match what would have been mountains in the currently near-by core. But how far did Curio Bay slide along the edge of Gondwana before it finally ‘welded’ into position?

The most up to date views on how the major components of Gondwana (and the rest of the world) fitted together over time, and their latitudes, are, thankfully, easy to access. At Gplates you can download free software and explore the different interpretations. Two modern views are compared below: Muller et al. (2008) and Seton et al. (2012). Their reconstructions for around 170 million years ago are broadly similar, but note, for example, that Muller et al. places Tasmania a little lower than the Polar Circle, whereas Seton et al. place it well above it. Curio Bay/the Murihiku was lying somewhere along a line that is now mostly submerged (indicated by lighter colour).

Some possible locations of Curio Bay fossil forest/Murihiku Terrane along the edge of Gondwana during the Early Jurassic, c. 170 Ma. At left the reconstruction of Seton et al. (2012) and Muller et al. (2008) to the right, using GPlates. Neither indicate the the  minor ‘slivers’  on the edge of Gondwana, such as the Murihiku. I’ve added the Murihiku here schematically as the yellow oval and the Polar Circle as the dotted blue line.

In either reconstruction, this line lies oblique to latitude. There is a good chance that Curio Bay was formed above the Polar Circle. Yet there is still some evidence that suggests it may have slid a particularly long way – from adjacent north-eastern Australia, for example. The fossil flora of the Walloon Coal Measures, near Brisbane, is very similar to what grew at and around Curio Bay (McLoughlin and Drinnan 1995). It grew somewhere very close to the Polar Circle. In general, both the Curio Bay flora and marine life at the time, suggest mid-latitudes rather than high ones (Pole 2009), although it could be that Southern Hemisphere ‘mid latitude’ biotas extended to high latitudes.

Why is this important? Today there are big patches of forest growing in the Curio Bay area, and forest grows on Stewart Island, further south still. At an even higher latitude, forests grow to the southern tip of South America, but then there is ocean, and no forests grow on Antarctica. Because of the cold, there is a southern limit to forest growth today. This limit did not exist in the Jurassic – as there was no polar ice. We know from other parts of the world that forests quite happily grew above the Polar Circle in these times. The realisation that this happened provoked plenty of research – the issue being, how the forests could survive so long in prolonged twilight, or even fully dark, ‘polar winters’.

If the Curio Bay Forest has not slid far, and was actually growing in Polar latitudes, it would join the ranks of those particularly curious and scientifically stimulating ‘Polar’ forests. However, it’s possible that Curio Bay has slid a considerable way – perhaps from just above the Polar Circle. This would still make it an unusual forest by today’s standards, growing at latitudes that are mostly too cold now (a small amount of polar forest does exist today in northern Alaska).

Future research probably will nail down Curio Bay’s past location. It might seem as simple as finding some Jurassic volcanic rocks near Curio Bay. These exist, but the results are likely to be unreliable due to later ‘over printing’. More likely the answer will come from a close look at the zircons in the Curio Bay sediments. These are crystals that form in granites, and from then on, are pretty well indestructible. They can survive repeated cycles of mountain uplift and erosion. Particular landscapes are distinct in the range of ages of their zircons. It’s their ‘fingerprint’. Modern techniques can be date individual zircons from rocks very precisely, and these
can be matched to the landscapes that they eroded from.

This zircon technique has found that rocks exposed now in the mountains of Canterbury and the Southern Alps, were actually formed off of northeastern Australia (Adams et al. 1998). Although this is much further to the north of New Zealand today – at that time it would have been in higher latitudes (c. 60-65°). This indicates the distance that Curio Bay/Murihiku could have slid.

Until the research is done, we won’t know for sure exactly where the Curio Bay fossil forest grew. But right now, it’s just half an hour’s drive from the southern-most tip of the South Island.