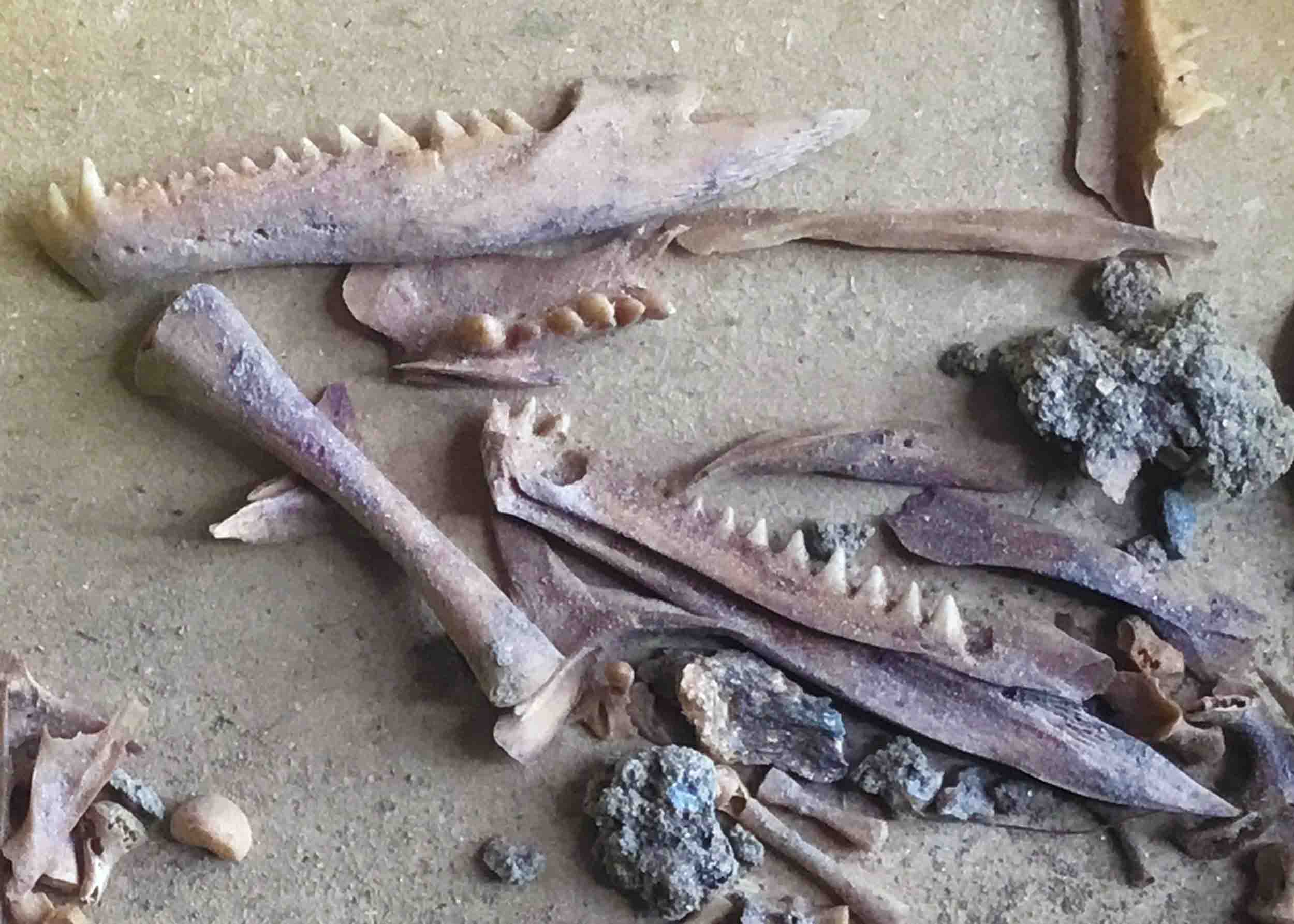 Bleached moa bones projected out from the steep bank of the nearly dry gully. This was exciting, as there were clearly several bones, and perhaps an entire skeleton waited to be uncovered. However, the layer of bones was under more than a meter of schist gravel and sand. That would require some serious digging, and would need a return trip with some decent tools.

It was 1983, and I was scouting the edges of the Cromwell Gorge, looking for signs of its prehistory, and salvaging what I could before it was submerged below a hydro-lake. The gully was incised into a terrace which sat above the Clutha River and the edge of the mountains. It exposed layers of sediment and scattered fossils, a little geological story book about the last few thousand years. To me, it was impossible to imagine that this would all be under water, a decade or so hence, but the level of the blue survey pegs flanking the gorge gave the cold facts. The government had spoken. If some sort of record was not made of this prehistoric treasure box, it would be lost for good.

Did I drive, or was driven to the end of Fruitgrowers Road? Being driven is more likely, but I cant remember. From there I certainly had to hump-it several kilometers further along the rough track along the right bank of the Clutha River to about mid way into the Cromwell Gorge. I set up my tent on that exposed terrace, immediately adjacent the moa bones in the dry gully. The tent was a 17th birthday present from my father, and was sort of A-frame and a pole at either end. It had a built in floor of fairly stiff material, which I thought was pretty cool. It was a big step up on the old tents which were open to the ground. However, it gave off a weirdly toxic smell (and was still smelling that way when I finally took it to the recycling center this year, nearly forty years later).

That evening, a furious nor-wester gale came barreling down the Gorge. It hammered my poor tent, sitting fully exposed in its path, ripped the pegs out of the ground and bent the poles – until I, lying on that built in floor, was the only thing keeping it on the ground. Just me in a sort of wildly-flapping plastic sack.

Eventually the wind blew itself out, and the dawn came on a pleasant day. With a shovel I started digging down through the gravel towards the moa bones. The plan was to dig a meter square hole, get rid of a cubic meter or so quickly, before getting careful towards the bones. It wasn’t too hard – each shovel full simply went over the side.

At the time, my father worked for the Ministry of Works. He drove a lot for his job, and at some point he appeared on the opposite side of the Clutha River and we had a chat. That’s an indication of the changes since then – you couldn’t do that across the width of hydro-Lake Dunstan today.

I returned to enthusiastically sending shovel-loads of gravel over the side, working my way down towards the moa, when – I found myself staring at a handful of little bones. As I had levered up a load of gravel with the shovel, the earth had parted, and there they were. I was astonished as there had been no warning that anything else was between me and the moa.

The jaw bones, with their distinctive teeth, were immediately recognisable as a tuatara. This was exciting – although it wasn’t the first tuatara known from Central Otago, there are only a very few. A few bones had gone over the edge in that shovel-load that exposed them. I climbed down and retrieved what I could find. Nevertheless, the skeleton was not complete, and my suspicion was, it had been buried that way.

What does the existence of a tuatara in the Cromwell Gorge tell us? In the wild today, tuatara are restricted to a few offshore islands. These islands have fairly scrubby vegetation, and I’d long wondered if ‘scrubby’ was the message that tuatara fossils were sending about Central Otago’s pre-human vegetation.

To date, the most thorough documentation about all aspects of tuatara biology and prehistory are in Alison Cree’s book, ‘Tuatara’. Within this, Cree summarised all known fossil tuatara deposits in a map (her figure 2.8). The information comes from a variety of sources – for Central Otago, this includes Trevor Worthy’s (1998) summary of Quaternary bone material, as well as previously unpublished records. Cree’s map shows tuatara remains from all over New Zealand, including the west and east coasts of the South Island, as well as inland Otago and Canterbury. The very important point is that many of these deposits were without doubt, under full, dense forest.

Predation by introduced rats is strongly fingered as the main cause behind the current restriction on tuatara to a few islands. Probably, the scrubby vegetation that’s on them now, just happens to be the kind of vegetation on those particular little areas (perhaps reflecting sea air and habitat degradation). The fossil record clearly shows that tuatara lived across a wide range of vegetation. It’s not possible to extrapolate from the vegetation of these islands, to anything specific that may have grown in Central Otago – beyond it being well-vegetated.

Tuatara fossils in Central Otago are probably telling us more about the abundance of what would have been their prey: large insects, and possibly other (smaller) reptiles. Central Otago was probably a place where both were common. Several months ago I had the privilege of getting inside the Mokomoko lizard sanctuary near Alexandra. Mokomoko is situated in the Conroys catchment, a few kilometers below the Earnscleugh Cave, in which tuatara remains have been found (Clark et al. 1996). However, there are no plans for introducing tuatara to Mokomoko – as I was told, any tuatara would make short work of the smaller lizards and skinks in the enclosure!

Back in 1983, I kept digging down towards those moa bones. What I eventually uncovered was a little underwhelming, though certainly worth the effort. There were several bones, but it looked like the remains of a moa which had lain on the ground and weathered significantly, before the sediment with the tuatara had been deposited over it.

All-good. It was a little icing on the tuatara cake. The tuatara bones went into a cheese box (see the featured image), and will eventually get published and go to a museum. Perhaps, a radiocarbon date will tell us how old it is….

Cree, A. 2014. Tuatara. Biology and conservation of a venerable survivor. Canterbury University Press.