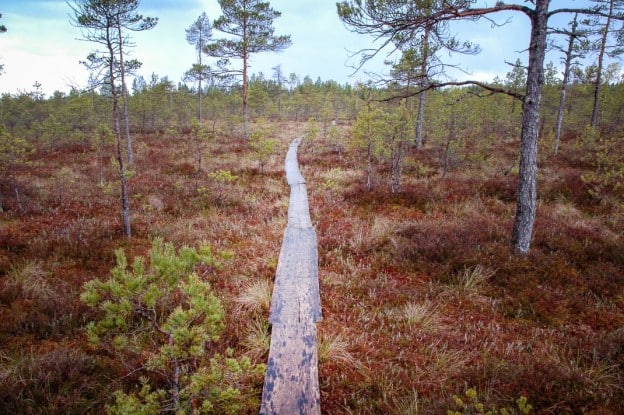 Estonia was my first-ever experience of driving, by myself, on the right hand side of the road. I tried to keep it simple. All I needed to do was pull-out  from the car hire place (small town, Viljandi linn), negotiate a round-about at the edge of town, then I would be onto a rural road where I could take things quietly. I hate round-abouts anywhere, they just give me a brain-short. I registered two things happened as I entered that round-about – one was another car, that despite all the mental planning, was coming at me from Completely the Wrong Direction. The other was a Police car, parked on the edge of the round-about. Wild evasive maneuver, panicked look in the mirror to check the cop hadn’t noticed, then I was out of town.

The destination that drew me enough to risk my life (and others) was Sooma National Park. Disclosure: I once went to one of New Zealand’s leading real estate agencies and mentioned that I like swamps. A couple of days later they called me back and said something like “So you … like … swamps? We may have something for you”. And I bought it. Sooma in the Estonian language, is said to mean “Land of Bogs”. There are technical differences between swamps and bogs, but whatever – Sooma has both.

The road was dry and my little car was enveloped in dust from a couple of large trucks coming towards me. Then there was rain, and the next trucks to pass covered the car in mud (OK, road not as quiet as I had hoped). But the rain stopped as I got to Sooma, parked, and started to walk the system of well-marked trails (Check out here, and search on Viljandi County).

Estonia was completely covered by an ice sheet during the last glacial period, only starting to emerge from the melt around 13,000-12,000 years ago.  Carbon-dating of the thick peat in Sooma shows it started to grow around 7,000-6,000 years ago (Pajula, 2000). Periodically flooded forests grew up along the rivers, these are ‘swamps’. In some areas, moss accumulation domed upwards above flood level to form nearly treeless ‘bogs’. This complex system of low-lying rivers, swamps and bogs is typical of what developed all around the Baltic. And as the ice went – people moved in. Cultures developed that called this kind of ecosystem their home – and adapted to it, no doubt involving a variety of watercraft.

If languages can be thought of in terms of a tree, there are two main branches of the language tree in Europe today (a third is Basque, which is restricted to the Pyrennees in Spain) –  one is  ‘Indo -European’, and includes not just English and German, but also languages that seem (to a novice)  very different, like Irish. The second is  ‘Finno-Ugric’, including the very different languages spoken by people around the cold, northern rim of Eurasia (Hungarian is an outlier). It includes Estonian, and the national border, less than 40 km from where I was walking – is therefore a major language frontier.

And this is where things get …. dangerous. Talk about a Million Ways to Die in the West? How about the middle of a scrap between linguists, archaeologists and nationalists? I’m just the piano-player, but here-goes.  There has long been a swing among the less politically-minded protagonsists to emphasise that language, archaeology and peoples are not the same. Reality is messier. But in a broad sense, ‘Finno-Ugric’ tends to be linked with ‘hunter-gatherer’ cultures, while ‘Indo-European’ is associated with an invasive (into Europe) farming culture. Now, recent DNA evidence is suggesting that in at least this case – the movement into Europe of Indo-European really did mean an actual migration (Allentoft et al. 2015). Original people, speaking another language, were ‘replaced’, whatever that means. So what were the hunter-gatherers speaking in Europe before then? Was it something like Basque? A kind of Finno-Ugric perhaps?  ‘Conventional’ linguistics  would have Finno-Ugric spreading from an original core somewhere in the Urals. Alternatively, the controversial ideas of Kalevi Wiik promote ancestral English-German being a kind of creole. It basically developed from Finno-Ugric hunters doing their best to speak Indo-European (and doing it with a distinctive accent). Then there are the ideas of Andres Pääbo, that there was a boat-centered culture of Finno-Ugrics, once wide-spread over northern Europe.  I like the basic imagery there, though the linguistic part I can’t comment on. It seems that many of these trains of thought simply lack enough evidence to nail it one way or the other.

My day at Sooma walking the trails – The Riisa Bog Trail, the Ingatsi Hiking Trail, the Kuresoo Peat-bog, was hands-down the best time in Estonia. It was a perfect time to ponder ecology and deep history. Tallinn is wonderful (if you can avoid the drunken tourists), but in Sooma I could get a feel for what some of my ancestors would have lived in (be they speaking Indo-European or Finno-Ugric) somewhere along the norther European Plain. I never saw a soul all day (do other people not feel the same about swamps as I do?), but it’s likely that had it been a few thousand years ago, it would have been more lively. Perhaps an arrow in the back, whistling out of the trees at the Indo-Euro interloper.

I managed to get the little car back to the hire company in Viljandi linn before they closed. It was in one-piece and I was rather proud of that. It was, however, almost invisible under the mud. I pulled up in front of their shop and saw three faces lift in my direction.

“We noticed”, in perfect Baltic droll.

Now does that come from Finno-Ugric or Indo-European?

Pajula , R. 2000. Spatio-temporal development of the Soomaa mire system in SW Estonia.Proceedings of the Estonian Academy of Sciences , Biology and Ecology , 49 , 194–208.