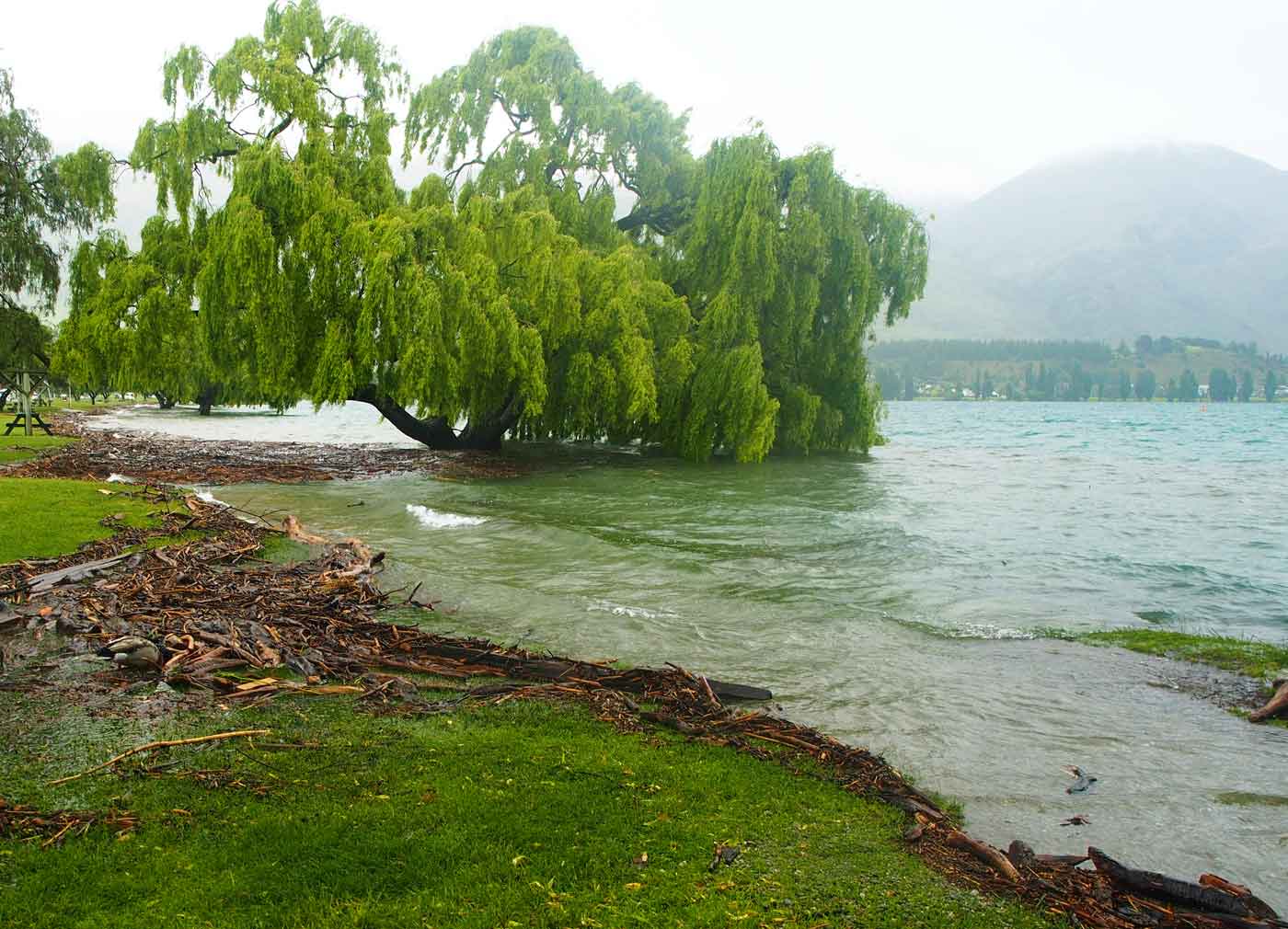 The weather around Wanaka, and the broader Otago Lakes area of New Zealand has gone slightly biblical.

New Zealand’s National Institute of Water and Atmospheric Research (NIWA) (tweeted on December 4th “It’s only the 4th, but about a month’s worth of rain has already fallen this December in Queenstown (78 mm) and Wanaka (77 mm)”.

The town of Wanaka lies on the shore of Lake Wanaka, which has its catchment across a significant part of the South Alps, where the rainfall is even heavier. As the lake level rose to alarming levels, low-lying businesses along Wanaka’s, lake shore, having suffered floods in 1998 and 2010, started sand-bagging. My regular cafe, Alchemy, was open yesterday morning (the 5th), but said it would likely close later in the day. It’s not that their cafe seats and tables are about to go awash (like lower places such as Patagonia) but their basement areas will flood.

The remarkable thing about this, is that New Zealand and Australian (BOM) weather agencies gave a heads-up that we would be in for this kind of weather back in August. They had identified something called ‘Sudden Stratospheric Warming’ over Antarctica. The label ‘Sudden Stratospheric Warming’ ( O’Neill et al., 2015) doesn’t really do justice to what happens, which, rather than just warming, is more of a huge atmospheric coniption. I’ll spare you my effort on how they actual proceed, but point you to a British Met Office explanation on Youtube.

Sudden Stratospheric Warming events are more common in the Northern Hemisphere, while in the Southern Hemisphere, since the relevant records began in 1950s, only two have been recognised, in 2002 and 2010. The interesting point here is that despite them being that rare inn our half of the world, their physics are understood well enough to infer how they will impact the broader climate. In New Zealand (wetter) and in New South Wales and southern Queensland, drier (and see what’s going on there now). That kind of broad-brush climate prediction is one admirable indication of how well we understand our climate systems. At another level, there is the prediction of what’s going to happen a few days in advance.

Despite being embedded in what must be some of the wildest and chaotic weather systems on the planet, in my opinion, the weather predictions for southern New Zealand are impressive. Three days, and even five days out, the timing and general pattern of rainfall events are modeled uncannily well. The only discrepancy that I notice, is that for the town of Wanaka, the amounts of predicted rainfall often tend to decrease as the date of the fall gets closer. Three days out it looks like we’re in for a massive dump, two days a light rain, and a few spots when the front actually passes through. However, in the nearby mountains, it’s raining cats and dogs, as predicted.

The ability of our current computer models to do this – to plug in the physical formulae for heat, moisture capacity, pressure and so-on, and realistically recreate weather days in advance, simply amazes me. How far in advance can this be done? Well, on Nov 25th I noticed NIWA Weather had posted results of a model showing that a significant amount of moisture (at that point lying south of Australia) would impact southern New Zealand around December 34. Basically the whole week was going to be wet. Out of curiosity, I posted NIWA’s model on my Twitter-feed, and waited.

And I would say their prediction, well over a week in advance, was basically bang-on.

The western half of New Zealand’s South Island is already a very wet place – there are places than can get over 10 m of rain in a year. At this latitude there is only New Zealand and Patagonia to intercept the rain-bearing atmospheric fronts that circle around Antarctica. However, the Southern Ocean has warmed significantly in the past few decades. For example, between the 1930s and 1990s it has warmed about 0.2 C (Liu and Curry, 2010) and currently it is warming at around 0.1°–0.2°C per decade (Sallée, 2018). Jiping Liu and Judith Curry summarised that because of the increased greenhouse gases in the atmosphere, Southern Ocean warming had accelerated, and that human-made forcing now exceeded “natural internal variability.” For the Southern Ocean this has meant an “enhanced atmospheric hydrological cycle” with more moisture in the warmer air, more snowfall over Antarctica, and an increase of Antarctic sea ice.

What is happening is that the increased warmth of the ocean surface is directly increasing the moisture-carrying capacity of the air above it. In New Zealand this is likely to result in more extreme rainfall events when atmospheric fronts travelling over the Southern Ocean collide with the Southern Alps. What seems to me as an escalating disaster of roads and bridges washing out in New Zealand’s West Coast, is likely to be a reflection of this (it’s certainly what is predicted). The West Coast area might be used to heavy rainfall, but beyond some point, mountainsides tend to fail and they, and their forests, head down the rivers. Once the forest-cover is gone, it will take a long, long time to recover – effectively never if rainfall intensity keeps going up with Southern Ocean surface temperature – and the greenhouse gas levels that drive that.

Although ‘Stratospheric Warming’ sounds close to ‘Global Warming’, it not an expression of it. It appears to be somewhat analogous to the quasi-cyclical changes in ocean currents, such as the El Nino-Southern Oscillation and apparent tele-connections between the stratospheric and oceanic phenomena are being researched (Domeisen et al., 2019).

However, there is reasonably robust data that the frequency of El Nino-Southern Oscillation events responds to the overall temperature of the Earth (e.g. Wang et al. 2019). A similar relationship might hold for the frequency of Sudden Stratospheric Warming events (Kang and Tziperman, in press 2017).

Cafe Alchemy will clearly be closed for a while yet. Looks like I’ll have to head to higher ground for a coffee. On an utterly trivial level of course, I may be a climate-refugee.