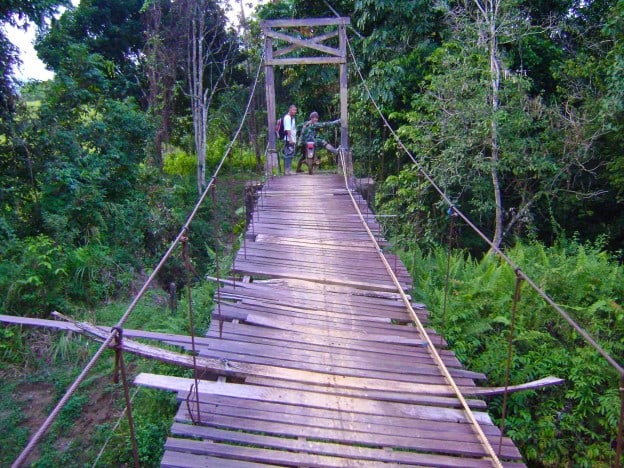 Roni is a Batak. This is a christian tribe that lives in the Lake Toba area of the otherwise Muslim Sumatra. The Bataks are famous for their relaxed, easy-going, easy to get along with anyone nature. Roni is just the kind of guy a geologist wants as a partner, minder, and Mr Fix-it.

There was a new job to do – yet another old coal mine to look at, somewhere in the bush of Kalimantan, the Indonesian part of the island of Borneo. We flew from Jakarta, to the coastal city of Banjarmasin, met our usual driver, the muslim Halil, and headed in to the interior.

After several hours of driving along the usual deeply rutted roads, we met the local contact. He had arranged two motorbikes, and leaving Halil behind to find some accommodation for the night, we set off on the bikes (myself sitting behind the local guide. We bumped for a couple of hours along washed out dirt tracks, old logging and coal mining haul roads, and hair-raising jury-rigged and semi-derelict bridges (Featured image shows Roni and our guide at the end of one of these).

Bridges cobbled together from the refuse of logging.

In the late 1980s I read Eric Hansen’s wonderful book, ‘Stranger in the Forest’. He is reputed to have been the first westerner to walk across Borneo. Not liking what he saw when he made it to the southern, Banjarmasin side – he walked back again. What he saw was industrialisation. Especially rampant logging. By the time I got there, 20 years later, there had been two waves of extraction – logging and coal mining. This meant that vast areas of what had been rainforest, were now impenetrable masses or secondary growth. Ecologists would call it ‘moribund’ – it’s a sort of successional state, but is not going anywhere fast. It was in this kind of mess that we found the old coal mine. But there was little time to scout around before we had to turn back. Night comes quickly near the Equator.

Roni, standing by an old stockpile of coal.

Back at our vehicle, Halil told us he had not been able find anywhere to stay. Our guide told us ‘no problem’ – and just to follow him. He roared off into the darkness on his bike. For a good half hour we drove through the dark, plantations of rubber trees lit by our head–lights on either side. Eventually we pulled up in front of a large building. It was unlit and locked. We waited another half hour until someone came to open it. It was concrete construction, with an imposing facade, a central door that opened onto a central passage. Inside, there were rooms along each side of the passage. Each room was separated from the outer wall by a tiny bathroom, where there was a cold water hose and a cistern. In the bathroom wall was a single porthole, about 10 cm in diameter. These holes were the only ventilation for the building. We spent a putrid, mosquito-ridden night, each in his own humid room.

Next morning we found there was a little shop nearby, where we got some chicken and rice and coffee for breakfast. Waiting to go, I was sitting in the front seat of our vehicle reading some reports, when a vehicle stopped nearby. An occupant walked up to me, reached through the open window, and snatched the reports from my hands. Pre-empting an intemperate response from me, Roni, said “Mike it’s the police”. I pulled out my passport and my SKJ – the document allowing us to be in specific parts of Indonesia. After a lengthy discussion in Bahasa between Roni and the policeman, a problem arose. Why had we not checked in with the Police in the evening? Our honest response was, that we barely knew where we were let alone where the nearest police station was. That was all very well said the policeman, but now you will have to come to the police station to discuss this.

At the police station (it turned out to be just a few km away) Roni came into his own. For an hour there was a good-natured discussion between him and the police captain. Eventually, the captain turned to me and said, in English, “Time is money! You guys continue with your work, but you must come back to see us this afternoon at 4 o’clock”. And of course, they kept my passport.

We bumped our way back to the abandoned coal mine. I did my work (it was rolling country, quite unlike the mine where I came very close to dying), and we found a small shop to have lunch. It was run by a few kids and their mother, selling chicken and rice and tea, as well as all the highly processed and highly packaged food that is now flooding a land rich in healthy natural fruits.

The eldest child in a ‘bush shop’ pours us some tea – surrounded by various signs of Western influence.

Back of the shop – two of the kids, and their mother.

One of the kids – looking at another ‘Stranger in the forest’

Getting back to the police station we found five of them sitting cross-legged on the floor. They were going through my passport repeatedly, forwards and backwards, right way out and upside down – passing it from one to the other. The cheerful conversation between Roni and the captain continued. I sat and watched, and did my best to look non-chalant. Suddenly, the captain turned to me and said:

From the police? Deep in muslim Kalimantan? What kind of set-up was this? But I said “Yes”, and the captain snapped his fingers. An underling got up, went outside, and returned with a crate of Guinness. As the conversation continued, I drank one while one of the policeman drank another. When I finished that one, the captain offered me another. I didn’t refuse.

Then the captain passed me his mobile phone. He asked me to make a recording, so that anyone who rang the police station would get my voice, in English, saying ‘Hello what can I do to help you?’ I did this, as the conversation went on. Then Roni turned to me:

“Mike, they want to know if we would like to see their baby deer?”

And we followed them outside. In the yard, was a low wooden fence, and inside a small enclosure was – a baby deer! It’s mother had been killed in some accident, and the police were looking after it. At this point Roni whispered to me:

The police were overjoyed. As we left, the police stuffed the remaining nine bottles of Guinness into every pocket and hand of mine they could find. They also invited us for breakfast the next day – which we accepted.

With the beer and the breakfast, we figured we came out almost ahead. But the next time we ran into Indonesian police, we were not so lucky. We missed a ferry, which meant we had to spend a night in a city that was not on our SKJ. With unbelievable bad luck the hotel we chose had a policeman’s convention. Red-heads kind of stick out in Indonesia. It cost us a $200 fine.

And there was no beer.