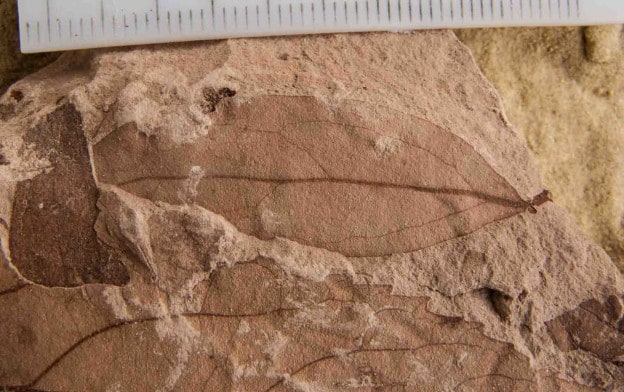 Sometime in the 1980s my Prof, ‘JDC’ (Doug Campbell of the Otago University), showed me a box of spectacular leaf fossils that had been collected from Kakahu by Graeme Mason while “out rabbiting”. Kakahu is a farming district in the hills, a few kilometres out of Geraldine, in New Zealand. Leaf fossils had been known from the area at least since the regional geology was published some years earlier (Wellman 1953) and numerous New Zealand researchers know of the site. Some fossil pollen was figured by Ian Raine (1988) which enabled him to date part of the sequence as Paleocene (around 66 – 56 million years ago). Fossil ferns of the climbing genus Lygodium were described shortly after by Andrew Rozefelds of the Queensland Museum (Rozefelds et al. 1992).

The cliffs at Kakahu.

One of the leaf fossils from Kakahu, New Zealand.

JDC and I made a trip to the area and collected leaf impression fossils from two localities. One was an old clay-pit (the fine clay was mined for items such as ceramic insulators) and the other a nicely exposed cliff with leaf-bearing rubble at its base (the evident source of Mason’s fossils). The outcome of this was a paper (Pole 1997) which described several leaf types and some conifers. Unfortunately, most of the leaves were just that – types. Although they looked like nice museum-grade specimens, they mostly lacked cuticle. This is the outer surface of the leaf that can provide tiny, but crucial information on what the leaf actually was. Fortunately, a few leaves did attached fragments of cuticle. In this case it led to identifying Lomatia – a protea that is not part of the indigenous flora of New Zealand today, but still grows in Australia.

One of the many types of fossil protea pollen from Kakahu, New Zealand.

The key person became an adjacent land owner, Ian Morrison. Ian was a tireless local historian and conservationist. He encouraged me to continue work at Kakahu and on subsequent trips he took me to the various outcrops he knew about – old coal mines, and patches of mudstone exposed in the beds of creeks, and facilitated access on other properties. The old clay pit JDC and I collected from quickly disappeared under the hooves of cattle. Some of the new sediment  Ian showed me looked like it ought to have well-preserved leaf cuticle. Based on the nice diversity – 18 different types of ‘broad leaf’ and five conifers,  I was expecting some sort of bonanza in cuticle diversity. Alas, it wasn’t to be. There was cuticle – but strangely, it was mostly all two species, a very bland laurel and a kahikatea-like conifer. Floundering a bit, I tried ‘Plan B’, and had a look at the pollen, and here things got interesting. There were some distinctly different assemblages – I could recognise the zones that had been established by Ian Raine for the Paleocene and Eocene (1984), but in-between there were samples that didn’t quite fall into either. There were lots of different types of protea pollen, as the leaves suggested. The other surprise was that charcoal was also abundant – lots and lots of it. This was a landscape that burned and burned, perhaps a bit like Australia today. There was a broad pattern to the fossils – lower down it was either conifer-dominated, or those bland laurels. But those higher up, there was a layer with diverse range of broad-leaved flowering plants with just scattered conifers. A conclusion was that the Kakahu sequence appears to cross the Paleocene-Eocene boundary, around 56 million years ago (Pole 2010).

A microscopic fragment of fossil charcoal from Kakahu, New Zealand.

The International geological time scale was cobbled together over a long time (around 200 years), by numerous scientists all over the world. The periods of time were proposed based on distinctive fossil content or local geology. Precisely nailing down the boundaries between geological periods is an on-going endeavour. But recognising a boundary raises the issue of – why is there at all? This line of questioning has led to some of the greatest advances in understanding Earth history. The Paleocene-Eocene boundary is now linked to a sudden c. 5 degrees C global rise in temperature. Strong suspicion for the cause has fallen on a massive release of methane into the atmosphere, although there are other hypotheses. The duration of the ‘event’ and its aftermath was very brief in geological terms – about 170, 000 years – but of key interest to me – the leaf fossils at the cliff site might have formed right in that critical time.

There are lots of things that the Kakahu fossil site might tell us. More recent collecting has increased the biodiversity even more. But the identity of most of the leaves is still unclear. Many of them are clearly not plants that live naturally in New Zealand today -some of the proteas for example. Some more cuticle would be most helpful. But Kakahu’s special interest is that its leaves may represent a forest that grew right at that time of massive global warming. It is well-established that there was rapid warming at that time and it is known how much the Earth warmed on-average. But it is fossil sites like Kakahu that can help answer the questions that come next – for instance, how much did it warm at New Zealand’s location?  When the Earth warms, it warms most towards the polar regions, some areas may even cool. Kakahu is today at about latitude 44 S, but 56 million million years ago, it may have been more like 50 S. More questions – did warming increase evaporation so that it got drier? Or did rainfall increase to compensate?  Why all that burning? These are questions, and answers, that can feed into science that is especially relevant today. Kakahu is a quiet spot, off the main road, but it’s one of New Zealand’s scientific treasures.

Sadly, the last time I dropped in to see Ian Morrison he told me he had a “spot of cancer”. He passed on just before I could send him the finished results of several years work.

Links on my references will take you to my Academia.edu page where you can download a pdf