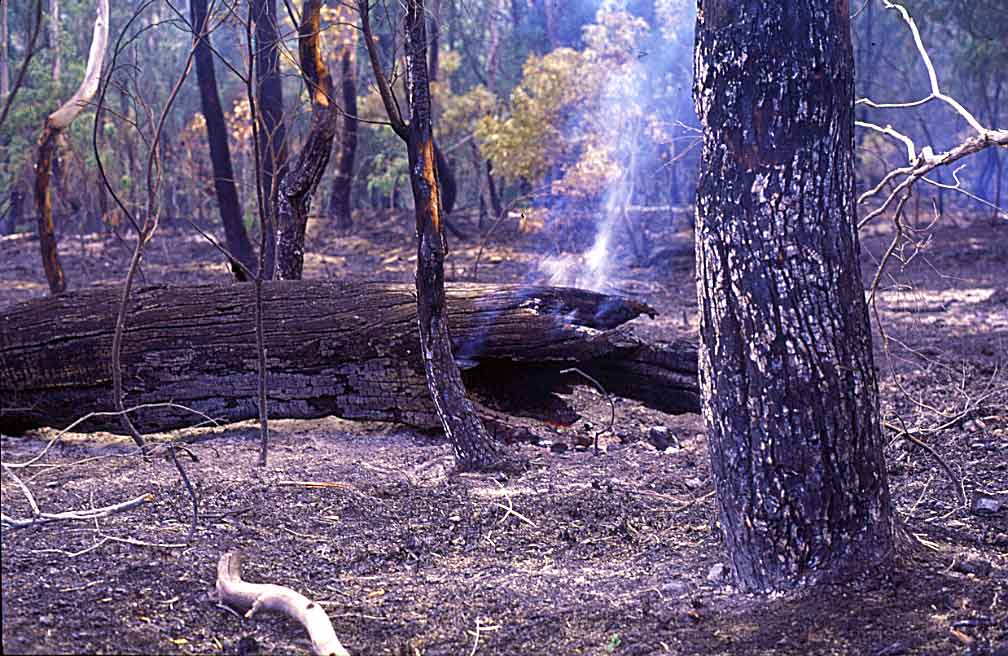 Have you noticed? Despite Australia’s on-going fire disaster, there are no shortage of reports telling us to … relax – it’s nothing new, and that it’s the fault of not enough hazard-reduction burning. And certainly, it’s nothing to do with global warming, which by increasing temperature, has exacerbated what would already be an extreme drought.

The total area burnt in the current fires is now 8.4 million hectares. However, various pundits keep emphasising that as long ago as 1851, Victoria’s ‘Black Thursday’ bushfires burnt “five million hectares” – a figure often paired with “a quarter the size of Victoria!” (as an example, this from The Australian). Their point is that a large, early fire in Australia, somehow diminishes the importance of what we are seeing now.

Clearly a large amount of Victoria burnt in 1851 – but elementary scepticism demands, where did this oft-repeated figure of ” five million hectares” come from? It’s important, because it is being compared directly with the current, carefully mapped, burnt areas. Finding an original source seem elusive. For example, ‘Wikipedia‘ references the Year Book Australia 2004, which seems to go back to the Department of Sustainability and Environment’s ‘Major bushfires in Victoria’ http://www.dse.vic.gov.au where we find that “a quarter of what is now Victoria (about five million hectares)”, but which isn’t referenced further to any authority.

The only attempt at a map of the 1851 Black Thursday fires that I know of appears in Paul Collins’ 2014 (highly recommended) book ‘Burn: the epic story of bushfire in Australia‘. However, the area which he shows as covering what I would say was the core of the Black Thursday fires is 2.07 million hectares. Collins indicated two much smaller fires on the coast and two distant, inland fires, beyond which nothing is known except reports that something burnt. The total burnt area on Collins’ map is 2.67 million hectares. Collins does not quote that “five million hectare” figure, but does state that “actual area of fire” is “probably much larger”. The Black Thursday fires were clearly huge, but the point is – we appear to have no accurate figure for how much they burnt .

Whatever area was burnt in 1851, simply comparing areas burnt is not a helpful way of ranking fires. For example, some other historical fires have burnt much greater areas, but I think they have mostly been in grassland, savanna or shrubland. The Black Thursday fires appear to have been largely forest, so in that sense, may be more comparable with what’s happening now (which certainly include more than just forest). But in 1851, Victoria did not have a bushfire fighting service and, as far as I know, no aerial water-bombers. A more realistic comparison with 1851 would be the area which would have burnt this season – without the massive fire-fighting efforts.

So, was the extent of the 1851 Black Thursday fires a result of ‘greenie’ policies that stopped people doing hazard reduction (control) burns to remove undergrowth? Very definitely not.

More seriously, could the fires have been the result of eliminating the Aborigines? In the early 19th century, and under normal circumstances, Aborigines would have been burning a lot. The practice of Aboriginal burning mainly entered western consciousness with the 1969 paper by Rhys Jones on ‘Fire stick farming’, and more recently in Bill Gammage’s book ‘The Biggest Estate on Earth, How Aborigines made Australia‘). The primary reason for this ‘cultural burning’ was to maintain biodiversity. Cool burning created a landscape mosaic of small patches of differently-aged vegetation. To some extent, the burning was also to maintain low fuel levels in the vegetation (This aspect of the burning may have been to replace the effects of megafaunal extinction thousands of years earlier -see Tim Flannery’s ‘The Future Eaters‘). However, whether this corresponds to what is currently called ‘Hazard Reduction’, or ‘Control Burning’, is more arguable, as Aboriginal management may not have allowed the appearance of hazard in the first place (It’s also pays not to generalise – Australia is a big place and with an extremely diverse range of indigenous cultures).

But by 1851, relations between Aborigines and European settlers in Victoria had been deteriorating for over a decade. A frontier war had begun and Aborigines were being steadily dispossessed. Was this enough to significantly decrease Aboriginal burning, and consequently, for dangerous amounts of fire-prone undergrowth vegetation to establish?

The situation in Victoria immediately before the 1851 fires was described by William Howitt (1854), shortly after he had experienced them first-hand:

“Both natives and colonists, who camp out in the bush, make fires, and leave them burning when they go away … you may see scores of these fires, as you travel through the forest, still burning. The trunks of trees will indeed burn for weeks… I have myself seen bullock drivers make a fire at noon to cook their dinners as they halted on the road, go away and leave it burning, and in less than half an hour afterwards it has caught the grass, and has spread over an inconceivable extent of the forest. In a few hours such a fire with a breeze will have raged through miles of forest; and will not stop till its progress is averted by a river , a road, or a clear valley destitute of long grass. You see, as you travel on, constant evidences of these fires sweeping along the mountains to the very tops, clearing everything but the largest and most solid trees before them.”

“Besides these accidental causes, now incalculably increased by the tens of thousands of diggers who are traversing the country in all directions, and who make fires at every halting-place, the natives set fire to the bush to drive out the game, which they stand prepared to attack in its flight; and also to destroy the long dry grass, and make it give place to young sweet grass” (Transcript from John Blay 2009).

So short answer – probably not. Even if Aboriginal presence had decreased, the impact of settlers had increased vastly. Their burning wasn’t carried out with the benefit of thousands of years of experience, but it seems that in 1851, every man and his dog was setting fire to whatever they could. There was no effective law, and certainly no greenies to stop them. It’s hard to imagine that there has ever been a time in Australia when more ‘fuel’ was being burnt, as soon as it was possible to burn it. If Australia needs the results of an ‘experiment’ to see what wholesale hazard-reduction burning will do, it has one. Despite all that burning -Australia still had one of its biggest fires in historical times. Perhaps not everyone recognises a difference between ‘cultural burning’ and ‘hazard reduction burning’, but those who do, would say that hazard reduction burns are hotter. While they remove fuel in the short term, it’s widely understood that they simultaneously trigger, or maintain, a cycle of thick, hazardous understory growth. The dilemma seems to have been understood by some by the time the 1939 fires came along.

So, apart from fuel levels possibly being initiated by European burning practice, why were the Black Thursday fires so extensive? William Howitt (1854) was pretty blunt:

“the country was this year visited with an extraordinary and intense and long-continued drought” and then …. “one of these hot winds came”.

Conditions now are so bad, after a long drought and extreme heat, that fuel is no longer the controlling factor. As Keeley and Syphard (2019) have proposed for Californian fires, we ought to distinguish between “fires that are clearly dominated by anomalously high fuel loads from those dominated by extreme wind events.”

Howitt may have had that figured out, back in 1854.