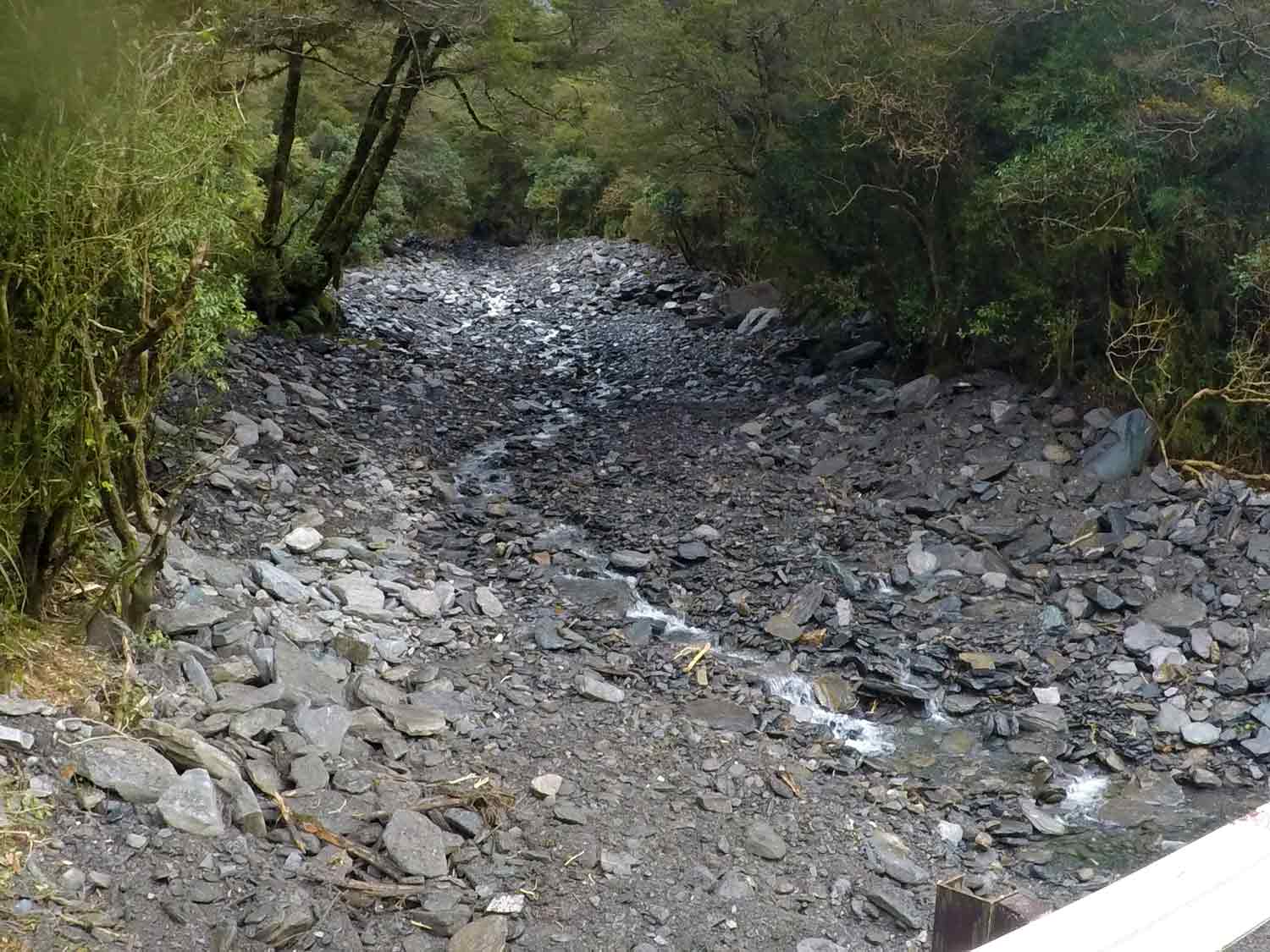 It was next morning that I heard the bridge had washed away. I had hammered over it during the night – back in the 90s – a time when you could do a tad over the speed limit on country roads, with reasonable confidence nobody in uniform was waiting somewhere in the murk. On that trip I was using the lights of another car as a ‘pathfinder’ – maybe a kilometer up ahead. It gave me confidence – a heads up on where the road was, and more importantly, that the road was still there.

The bridge that was washed away later that night was near the town of Roxburgh, in Central Otago. At the time, it just seemed unusual, though sort of sobering. Then last November came what was called the worst flood in more than 40 years in Roxburgh, and then in February, more serious flooding again. So this stuff happens from time to time, no doubt about that. But is there a trend?

The Clutha River at Alexandra a few weeks ago. It’s seen some huge floods – but nothing to do with intense rainfall events on the town itself.

In January the local paper showed a photograph of some kids having a “paddle down the street” on kayaks and body boards in Alexandra after “12.5 mm of rain fell in just 30 minutes”. The article cited a meteorologist as saying “the storms were typical for this time of year”.

Mmm? I grew up in Alexandra, and not only does kayaking down the street sound unprecedented, but my memory is that thunderstorms were practically unheard of. All I can remember is being in awe at a bit of what we called ‘wildfire’ – the flashes of lightening occurring a long way off, on the other side of the mountains. Our river had some huge floods – but from long, heavy rain in the distant high country, sometimes reinforced with snow melt. Rain in any size, shape or form, was reasonably uncommon in the Alexandra I grew up in. So a photo of kids navigating the street and talk of thunderstorms got my attention.

Over the last few weeks I’ve made the trip from Wanaka, over the Haast Pass to the West Coast a couple of times. This is a far, far wetter area than Roxburgh or Alexandra, with the mountain streams having to deal with some of the highest rainfalls in New Zealand. But ‘something’ seems to be happening. Stream after stream is being washed out – going from a photogenic creek, where trees two or three hundred years old grew right up to the flowing water – are being smashed out of the way.

Douglas Ck, West Coast – washed out and with some remedial work.

It’s happening right across the region. In the heavily forested areas west of the Main Divide – Gout Creek (see the featured image), Douglas Creek, and one that I’d have to check on a map for its name – because the sign was washed away, are all washed-out. The area under Gates of Haast Bridge has become a mess, and above that, there is Diana Falls, where a couple in a camper van had the very big misfortune to be right under a slide as it gave way. On the Wanaka side of the Pass, Pipson’s Creek near Makarora has been destroyed, and further down the road, now in cleared farming country, White, Station, Boggy, and Flaxmill Creeks, have all been wrecked.

These streams are being washed out by extreme floods – the results of a very large amount of rain falling in a short time. I don’t think there is any connection with vegetation degradation in the catchments (from deer or possums, say) but stand to be corrected. My guess is, that while heavy rain is typical in this region, the actual amount that is coming down in intense falls – has increased. At least some of those streams have been problem spots for a few years, but stream wash-outs along the Haast Pass road seem to be an almost regular occurrence now – with no time for the last one to recover.

Why would the amount of rain getting dumped in individual storm events go up? Simple physics. Warmer air holds more moisture, the area is warming, and more intense rainfall events are predicted. By their very sporadic nature, proving a significant trend is not easy, but such a pattern is becoming apparent.

As a local New Zealander I’m alarmed at the amount of money this country spends on cleaning up ‘natural’ disasters. Will it drive us broke? (I’m not an economist, but apparently fixing up such disasters do our GDP wonders, and that’s what counts – right?). But it’s not just money. After each of these floods, the mess of boulders, mud and trees that is left is being bulldozed, creating a sort of canal, along which the next flood will flow unhindered. From beautiful mountain streams lined with centuries-old trees, to rocky canals – these places will now never be the same in our lifetimes. But with each of these wash-outs, something is lost. One by one, those mountain streams, where our tourists pull over to frame those scenic photos that ‘make’ their trip, are being lost and turning into ditches.

Pipson Ck. Just upstream on the right was where i spent my first night out.

The mess that was Pipson’s Creek hits a personal nerve. When I was very young, my family camped in the bush that grew along the stream. It was my first night sleeping in the open. In the morning, my father scooped up my sleeping bag, and with me trapped and shrieking somewhere down the bottom of it, carried me off somewhere. That idyllic camp spot is now gone, it’s bare gravel. It was flooded away shortly after that, but the place has become much, much worse. My brain connects the dots between the odd stuff happening now in Central Otago and to the west. It looks like a ‘system-change’, and signs of different New Zealand we are sliding in to.