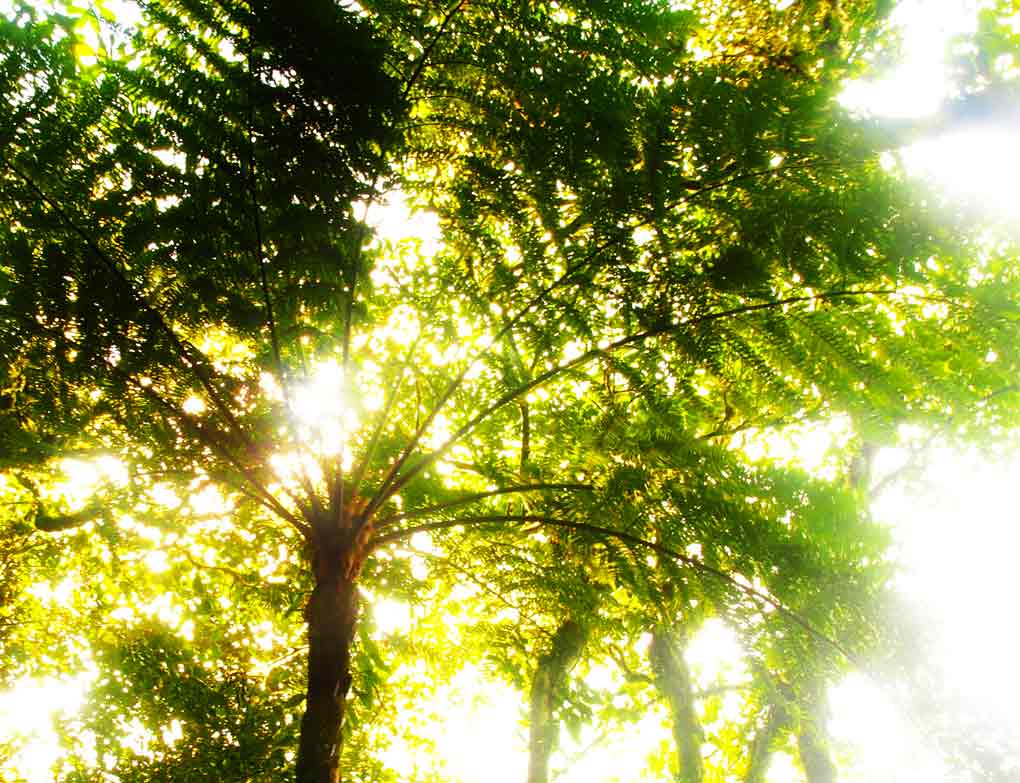 This from my local guide on Omatepe Island, Nicaragua. I was sitting behind him on his trail bike, and we were burning down the road after walking up Volcan Maderas, the smaller of the two volcanoes on the Island.

My hostel, Soma, had organised my guide, Will, who picked me up with his bike before dawn. I wanted to see some cloud forest, and had woken up hoping for what I always hope for when visiting cloud forest – cloud! As it got light, it was clear that instead of cloud, we were in for rain.

As we headed along the road to towards the east, we passed what remains of the Omatepe lowland forest. It is deciduous, and over the distinct dry season, which (despite the present showers), was just hinting to arrive, most of the trees drop all their leaves. It’s just as in the ‘autumn’ or ‘fall’ of cool countries. The cloud forest that we were heading for is evergreen, and in these regions is only encountered high on the slopes of mountains. At such altitudes, the mountains cause a band of frequent cloudy conditions, which overrules, to some degree, the dry periods lower down.

Beyond ‘bagging’ some cloud forest, I had no others goals. I would be happy just to experience a little more of that vegetation. This plan encapsulated the typical way I like to travel – something specific that I like to “see for myself” to help make sense of the world, but also a vague enough goal for serendipity to occur long the way.

I quickly recognised that as a guide, Will knew what he was talking about. As a sort of cross between a geologist and a botanist myself, I knew there was no bullshit in what he was telling me. When I taught Americans ecology in Australia, the definition of rainforest was a core part of the programme. And in Australia, cloudforests are generally lumped in with rainforest. Will’s view, which will reflect other tropical forest ecologists, is that cloud forests can be, and in this case are, quite distinct from rainforests. In the first case, the moisture and shading from cloud cover reduces the need for rain, whereas true rainforest has rain – but throughout the year.

So once we reached the park entrance, after parking the bike and starting to walk up the path, I quizzed Will on how he would recognise the cloud forest. He told me that it was partly on seeing some key plants – one of them being ‘tree ferns’. In fact, he said, they were some of the tallest tree ferns anywhere. Hearing this really perked my interest. In my travels south from Mexico City, I’d seen a lot of pine forests, and a lot of oak forests, but no tree ferns. Oddly enough, tree ferns are something that would remind me of home, far away in New Zealand.

In New Zealand I own a little patch of ‘bush’, as we tend to call forest. It’s full of tree ferns, but quite unlike Omatepe, it’s almost at sea level. That’s because it there rains – a lot. A few decades ago (long before I bought it) the forest was logged, and had all its big trees removed. This was a boon for the tree ferns, which have taken over much of what is now the forest canopy. It sounds nice, and in a way it is – except that I am trying to encourage the species that were logged, to grow back. Unfortunately, the huge tree fern fronds shade out everything below them, not giving the tiny seedlings a chance.

It’s an interesting bit of ecology. Normally, when a forest is damaged, by a big tree-falling, or by storms, a process of ‘succession’ takes place, and the ‘wound’ is eventually healed. However, with huge damage, like from logging, that process can become ‘moribund’, as some plants take over and delay the process. This is what the tree ferns are doing at my place. Their fast-growing fronds monopolise the light, and shade out the tiny, slow-growing conifer seedlings down on the forest floor. I think the tree ferns are a perfect example of what Nasim Taleb calls ‘antifragile’. After reading his earlier book, ‘The Black Swan’ (and which features in another one of my posts), I’m now on his book: ‘Antifragile – Things that Gain from Disorder’. My tree ferns might seem ‘resilient’, but this is exactly what Taleb is trying to explain is not the case. They don’t just put up with disruption, but thrive on it.

Without a helping hand, it will be centuries before the canopy of my forest is again dominated by the big trees. To help them along, every six months or so, I go berserk in my forest with a pruning saw, and lop off tree fern fronds that have conifer seedlings under them. Suddenly bathed in a cone of light, the seedlings make a little spurt of growth – until the tree ferns grow back within a few months. Eventually (perhaps in a century!) those trees will overtop the tree ferns, and they’ll be away.

A few spots on my place are just overgrown old pasture. Weeds are a big problem there. I had been pruning tree ferns in the forest a few years before a had a brain-wave – that if tree ferns are so good at shading competition, I should transplant some from the forest to the old pasture. Watch this space – I’m hoping that one day this idea will be seen as modest genius.

Back on Omatepe, as Will and I walked onwards and upwards, the light rain eased off, and instead, it was just plain cloudy. Perfect conditions. Will may quietly have regretted telling me about the tree ferns, as the ones that he knew of , were quite high up. We hadn’t planned on summiting Maderas, and were counting on getting down for a late lunch. Will knew there were a lot up near the caldera, but thought he could remember a few – among the first signs of the transition to cloud forest, not too far up.

Eventually, Will spotted a couple of his cloud forest ‘indicators’ – living signs that we had reached the lower edge of the cloudy zone. A few minutes later, he gave a yell that he could see a tree fern. It was a perfect example – a trunk projecting high into the forest canopy, and ending in a bunch of fronds. I could have transplanted it to New Zealand, and it would have been lost among mine. But pretty much to the minute that we entered the cloud forest – the cloud lifted, and the trees were in full sun. Dammit! That was a reminder of just how on the edge this cloud forest was. When it comes to smashing the forest, the Omatepe tree ferns may be as antifragile as mine in New Zealand. However, the antifragility of tree ferns may depend on the circumstance. As the Earth warms, the cloudy region of many of these forests is predicted to rise. It won’t surprise me if one time soon, there will be an exceptional dry season on Omatepe, and next time Will takes some guests up, those first tree ferns will be dead. If his other indicator plants are gone as well, then the boundary of cloud forest will have moved upwards.

Because of the harshly contrasting light now, I set my camera on its tripod, framed the tree fern, and waited, minute after minute, for the shadow of any passing cloud to cover us. It’s nowhere near as good as being in cloud, but will do in an emergency. The result (see the featured image) is a tree fern back-lit by the bright sun that still gets through a little cloud.

Meanwhile, Will scouted ahead and found another couple of tree ferns – and then it was time to head back down. It seemed so much steeper and more slippery going this way and a couple of times I nearly went for a skate. There is an upside to sunny skies of course – and we had a glorious view across the isthmus to Volcan Concepcion.

Once we got to the bottom, we jumped on the bike, and headed for a restaurant right on the shore of the huge Lake Cocibolca. After a meal of fish, we were back on the bike, and racing towards what Will said would be a fine place to watch the sunset. At this point we had maybe five minutes to go. Looking over Will’s shoulder, I saw some consternation on the road up ahead, but I had missed the crucial signal. A motorcyclist coming towards us had subtly clasped his left wrist with his right hand. This was the local warning sign for police – and we had no helmets.

That’s when we had a quick word those ‘hoodlums’ – three guys all on one bike and also with no helmets. We, along with various others, turned off the main road, and headed along a rough dirt track through the forest. Evading the Nicaraguan cops meant the end of any chance of seeing the sunset, but was probably well worth it. We re-joined the main road some distance past where the police were known to stake the place out (a maneuver surely well-known to them as well). Will dropped me off at Hostel Soma, then went to do some shopping to fill in time before the police knocked off for the evening.

The story drew eye-rolls from the locals – as they note that the police tend to appear from the mainland just before Christmas – for a not so subtle bit of holiday revenue making. The nice news for travelers is that there is little need for police on Omatepe, as crime is basically unknown. That is, other than various galoots and hoodlums riding without helmets.

Ethics and Omatepe Guides
In my previous post, I wrote that it’s fine to go and visit Nicaragua now. Not just fine, but that you should. The political issues have left a lot of desperate people. However, the dynamic of this is that people desperate to feed their families are accepting lower and lower rates for work – under cutting everyone else in a race to the bottom. Yes, the cost of living in Nicaragua is probably cheaper than wherever you are. But if your guide ends up getting $US 15 for a ten hour hike (whatever he.she gets from the hostel, plus your tip), you’ve gone past ‘bargain’ and are in unethical territory.