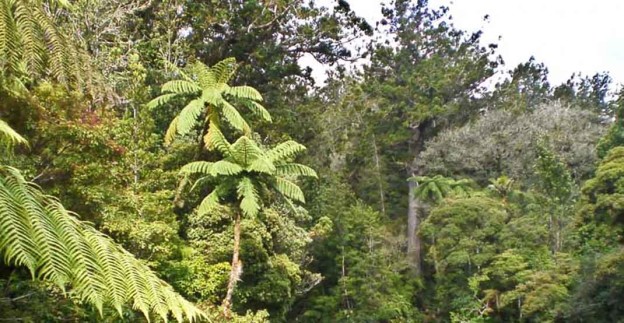 A respectable-sized kauri in the Waipoua Forest, New Zealand.

New Zealanders are becoming aware of a new threat to their native forests – as if logging, burning, opossums, deer, ferrets, cats, dogs, weren’t enough. This time it’s a fungus (Phytophthora), and it’s attacking our oldest trees – the giant kauris (Agathis). This pest has already devastated parts of Australia, where ‘grass-trees’ (Xanthorrhoea), some of them hundreds of years old, have been left as a pile of rotting tissue within days. It seems scarcely believable that after more than a century of destruction by fire, axe and saw, we finally managed to protect a few small patches of mature kauri forest – only to see a new threat come, one that recognises no mere legal boundaries.

For now, let’s go half a world away and look at the past of the British Isles. Pollen analysis of British peat bogs became a serious topic for study over a century ago. It was realised that peat, because it retained all the spores and pollen that fell on it while it grew, preserved evidence of the local and surrounding vegetation. By counting the grains, one could get an idea of the composition of, not only the peat swamp, but whatever grew around it. In the case of the British Isles thousands of years ago, this was forest. One clear and early conclusion from the peat study, was that that elms (Ulmus, not Alnus, which are alders) suffered some sort of a serious decline about 5000 years ago. The drop in proportions of Ulmus pollen relative to other plants could be seen in peat after peat. But what was the cause? Two suspects quickly came into focus. One was climate change. The pioneering work by the Dane, Axel Blytt (1876) to explain the presence of tree stumps in peat, recognised that climate had changed in post-glacial times. The work led to recognition of the Atlantic (warm, moist) and later Boreal (cool, dry) periods. These periods were shown to correspond to changes in pollen frequencies  in peat by a fellow Dane Rutger Sernander (1908) and then a Swede, Lennart von Post (1930) and another Dane, Johannes  Iversen (1941). The elm decline was so predictable that the drop could be used as the division between the Atlantic and the Boreal periods.

However, the other suspect was human activity. Five thousand years ago was approximately the time when agriculture reached the British Isles, that is, the Mesolithic period passed in to the Neolithic period. One thing farmers tend to do, is to cut down forest. Practically symbolic of the Neolithic revolution in Europe is the flint axe. Farmers cut and burnt down forest to create grazing lands, and in the autumn they would have cut branches for fodder. In other words, the elm decline could be used to recognise the advent of agriculture, in the absence of archaeological evidence. An early proponent of this view was Knut Faegri (1944, and in case you were guessing he was wither a Dane or a Swede – close, he was Norwegian). Neither the climate nor anthropogenic view was conclusive and reality may have been more nuanced. For example, climate change may have caused forest change which and led to farmers expanding into new areas.

More recently a third suspect has been proposed – disease. Just like the grass trees in Australia and now the kauri in New Zealand, the British Isles have been ravaged by ‘Dutch Elm Disease’ caused by a fungus (Ophiostoma).  It seems like this is not the first time. A recent synthesis of the Elm Decline phenomenon (Parker 2002) has suggested that there was a climate change – and this helped agriculture expand in to the British Isles. Farmers would have had various impacts on the forest – and by opening it up, this would have made it vulnerable to the incursions of disease. Thus, the ‘Elm Decline’ is probably a consequence of all three suspects. The first ‘Elm Decline’ appears to have severely reduced elms in Britain, but the current attack is playing out somewhat differently as different species are involved. It turns out that the most prominent elm in Britain, Ulmus procera, is a clone, introduced relatively recently by the Romans (Gil et al. 2004). Because of the resulting lack of genetic variation, without concerted management, the fungus would seem  likely to cause its extinction in the British Isles. The other, truly native species (U. glabra and U. minor), are also susceptible to the disease, but appear to be reacting more slowly.

So this kind of fungal-disaster has happened in the distant past, but humans have been implicated. At least the first Elm Decline in the British Isles was just that – a decline, not an extinction. Back in New Zealand, we can hope that the genetic variability of our kauris will see them through the onslaught, to be a continuing presence in the forests. Now the fungus is here, it’s unlikely we will ever get rid of it – but the ‘human impact’ is one variable we have some control over. The Kauri Dieback website states “These [fungal] spores live in soil and are spread with soil movement.  Dirty footwear, animals, equipment and vehicles are responsible for the large scale spread of this disease.” Sadly, this of course, includes simply walking in the forest.

Blytt A. 1876. Essay on the immigration of the Norwegian flora.

Sernander R. (1908): On the evidence of post-glacial changes of climate furnished by the peat mosses of northern Eu­rope. Geologiska Föreningens i Stockholm Förhaldlinger 30: 365-478.