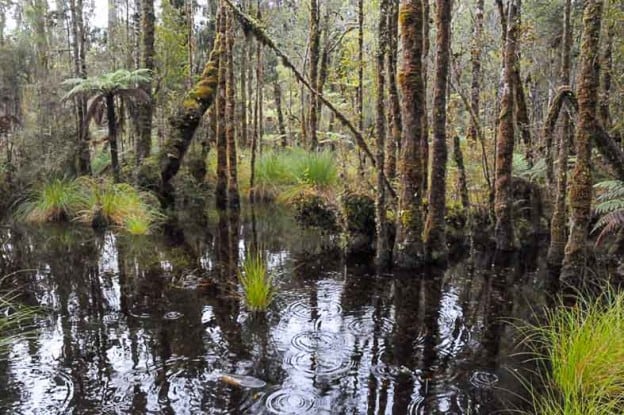 I own a little patch of bush in the Haast, on the wet, West Coast of New Zealand. It was selectively logged a few decades ago, which meant that the large podocarp trees were removed. It then became the edge of what was left of the forest, and farmland.

My place. A very-poorly draining spot resulting from logging. Flax plantings are taking hold around the edges.

My place. An old logging track is now overgrown with grass. Large kamahi (Weinmannia) trees, left by the loggers, poke up above regowth.

I bought it with the intention of restoring the vegetation, and then perhaps sneaking a small hut in to the most unobtrusive spot. Logging activities severely messed up the drainage of what would have been a pretty swampy forest anyway. After heavy rains (frequent in this part of the world!) a large patch of the area becomes standing water, sometimes for weeks at a time. These areas simply remain in grass and sedge – it’s essentially waterlogged, overgrown pasture. One of the big jobs has been to dig small drainage ditches, just deep enough to get rid of that standing water. Not an easy job as there is little drop-off in this particular spot, and the best route ended up being through standing bush. After many visits I’m finally at the point where flax, and just perhaps, some kowhais will survive. At this stage, these are the only two native species that don’t occur naturally on the property, that I will ‘introduce’. I hope to recreate the kind of flax-kowhai wetland found further south at Hapuka.

Logging opened up the ground for invasion of other weeds, mainly gorse. There were several patches of this, and although they weren’t spreading, they needed to go. A hand-saw and paint-on weedkiller did the trick – until, like the proverbial gerbil-thumping, they resprouted from all around.

Then there is the biggest curse in this country – blackberry. I have yet to find their roots and nuke them. Logging also favoured our native Rubus, and the very numerous tree ferns which now form a canopy in many parts. Both of these were there before logging, but their increased numbers are shielding the forest floor from light, and in the case of the tree ferns – dropping a prodigious amount of litter on the ground, smothering seedlings. So much of my effort has been to keep trimming these back to try and stimulate the return of broad-leaved and conifer seedlings, of which there are a lot.

With a lot of work, in 400-500 years – the time it will take the conifer seedlings that I plant to mature, this little patch of land will once again start to look like intact forest. It’s an investment for future generations.

But here’s the rub. My land is quite some distance from the coast – more than 6km. It is (and it differs according to what source I rely on), about 20 m above sea level. Given the talk of global sea level rise, one would think this was a good, long-term bet for stability. Or is it? How might it feel from the perspective off trees that live for 500, even 700 years?

The current rate of sea level rise is about 4 mm per year, or 2 m in 500 years. But one certainty is that that rate will rise. The predictions of the IPPC are that, as a result of increased atmospheric CO2 levels (and I’m part of the problem), sea level will rise by 56-200 mm by the end of the century. So by 2100, the scariest scenario would be a 2m rise in mean sea level. Where will that put the limits of the effect of salt water? That’s harder to say. On top of mean sea level there is a tidal range of about 2m on to that, and above that, storm surge. On New Zealand’s West Coast this will mean coastal erosion and a few white-baiter’s huts gone. There are some coastal swamps that will change entirely as they become tidal and saline – the fantastic Hapuka board walk just south of Haast is history. Likewise, the board walk through kahikatea swamp forest at Ship Creek. Also history. See them while you can. But for my little patch of paradise, perhaps things are not too bad.

The Hapuka boardwalk at high tide. A small rise in sea-level will overwhelm the marsh and destroy the flax and trees at a slightly higher level.

The Hapuka boardwalk. A couple of meters sea level rise will flood the boardwalk, and all the swampy vegetation back to the edge of the tall forest in the background.

The Ship Ck boardwalk (part of the boardwalk is visible at far-right).

Kahikatea (Dacrycarpus) swamp forest on the Ship Ck boardwalk. A couple of meters sea level rise will probably be enough to kill these trees.

Of course, sea level rise doesn’t stop in a century. The raised level of atmospheric CO2 is a gift that will keep giving. Because it takes so long for the natural ‘sinks’ to take CO2 out of the atmosphere,  the high levels of CO2 will remain and continue to make change for centuries to come. It’s this long-term perspective that means melting polar ice caps can be a very real possibility. The IPCC has made some predictions through to 2300, well-within the life-span of the trees I am planting. The upper range of their predictions are for 4 m “or more” of sea level rise by 2300. So that’s high-seas washing maybe 8 m above today’s mean sea level. My trees are off the hook so-far.

But let’s take this even further – and consider entirely melting the Greenland Ice Sheet. This has become a very real, and to some, inevitable possibility. That will raise global sea level about seven metres. Factoring in tidal range and storm surge, this is the Haast Pub becoming coastal. This is waves sloshing across the Haast bridge. It’s a lot of coastal wetlands becoming lagoons. This scenario is similar to what did happen in the Last Interglacial period (c. 130-115,000 years ago) when sea level rose more than 6.6 m and likely more than 8 m above the present (Kopp et al. 2009). Incidentally, carbon dioxide levels in the Last Interglacial were much less than what they are now,  and consequently the Greenland Ice Sheet only partially melted, and probably contributed less than half of the total global sea level rise  (Stone et al. 2013). There is of course, other ice melting at the same time, as well as thermal expansion of the oceans. An 8 m rise in sea level is about what 4 m of rise by 2300 look like by 2600 – if the rate stays the same.

A line representing the extreme values for two future sea level predictions – 2100 and 2300. I’ve continued the line on to 2600, at which point I hope many of the trees I have planted will still be alive. If the extreme prediction comes to pass, and the rate of sea level rise doesnt change, sea levels may be 8 m higher then – essentially like the Last Interglacial.

It is plausible that we will put enough CO2 into the atmosphere to eventually melt all the ice on Earth. Neither melting the Greenland Ice Sheet or Antarctica, I emphasise, is a result of complicated and possibly dodgy climate models. It’s just based on past history. When global CO2 levels hit a certain threshold, polar ice caps melt. Once Antarctica melts,  sea level will be about 70m than it is now. All of lowland West Coast will be inundated. The Haast Valley will become an arm of the sea – a fiord. That will put my wee patch of paradise in open ocean. Tidal mudflats will develop 3-4 km downstream of the junction of the Landsborough River.

How long this will take is quite a different question – that does require modelling, and the answer will be necessarily vague. The figures I’ve read dont seem to get more precise than “thousands of years”. It seems like in all but a nightmare scenario my trees may get to grow old, and perhaps see their offspring grow up. But it might be in a rather different neighbourhood – perhaps with the coast line looking much more like the Last Interglacial.

The Haast region with an 8 m higher coastline (pink line). The Haast Pub and bridge are underwater at high tide. Many of the inland swamps may be salty.