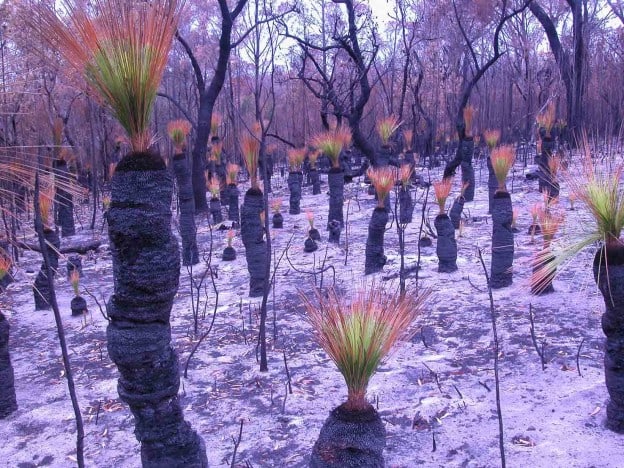 In Australia there are trees that look like inside-out chimneys. Strong but sensitive – a fungal attack can leave them as a pile of mush within days, and, often as not, they won’t survive being transplanted from the wild. But, you can burn them to a crisp – and they will re-sprout, again, and again, and again.

These are the ‘grasstrees’, ‘balgas’ in one of the Aborginal languages of SW Australia, ‘black boys’ for those not totally PC, or Xanthorrhoea for those who can spell it (it’s not as in diarrhea). There are about 30 species in the genus – all restricted to Australia, although not all of them grow as trees. The ones that do, develop an outer sheath of old leaf bases. Its these leaf bases that char in a fire, and form an almost indestructible shield. A little bit like the Space-Shuttle heat-shield. The growing tip is buried deep down inside the mass of leaves at the top, and usually survives a fire.

Students looking at grasstrees on Stradbroke Island, soon after a fire.

Grasstrees are monocots, like palms or lilies – and are somewhat related to the New Zealand flax, or to the aloes. Being monocots means that they don’t form wood in the same way as ‘normal’ trees. In the same way that if you cut a palm tree down, you wont see a series of annual growth rings in the stump. But, and this is the big thing – the discovery that as the grass trees grow, in a year some of the species form light and dark band pair. This means that you can work out how old the tree is. And the answers are impressive – they can grow for over 500 years. It’s sobering to realise that many of Australia’s grasstrees are older than the oldest trees in some countries – and that a patch of them in England would count as ‘ancient woodland’.

Light and dark bands on the trunk of a grasstree on Stradbroke Island. Each pair is a year of growth.

But there is more. When some species of grass tree burn, they form a dark, deeply pigmented ring of leaves. They also tend to flower – and this results in a kink in the trunk. Put this information together – and grass trees, not to be outdone by ‘real trees’ like the redwoods, can provide a history of burning going back hundreds of years.

A group of Australian ecologists (Lamont and Downes 1979; Ward and Sneeuwjagt 1999; Ward et al. 2001; Ward 2004) did just that. What they found was that there had been a distinct change in fire frequency in south west Australia after arrival of Europeans. In Aboriginal times there were 2-4 fires per decade. But with the advent of Europeans – this steadily dropped to only a fire every 20 years or so. This is the important bit. Fires are not just about whether they occur or not – but about their ‘regime’. It matters how often they come back, which is linked to how light or severe they are. Frequent, and/or severe fires can be very bad for biodiversity. In some vegetation, no fire can also lead to a drop in diversity. In between those extremes is a goldilocks zone, where just the right amount of burning can maintain optimal biodiversity. The Aboriginals would have known that a few years after a burn, animals they hunted, like wallabies, moved out of the area. The fresh plant growth they required was no-longer there.

Looking at grass trees on Stradbroke Island (off the coast from Brisbane) was a regular part of the first field trip for my American students. They would team-up and choose a suitably ancient looking tree and try to document its history. We couldn’t use angle-grinders on the grass-tree trucks (like the more serious scientists) so we were left with counting ring-pairs between kinks in the trunks. The catch was to see if the total group effort showed some pattern. This was never all that convincing. Perhaps it was a case of ‘too many cooks’, and some grass tree species also flower (I’m told) after a bad drought, and this likely introduced some noise into our results. But I think it always was successful in giving the students an introduction to some of the typical Australian plants – and various signs of burning.

Grass Tree Data from my UCal class of 2006

One of my colleagues acquired the trunk of an old grass tree and wondered what might be done with it – the context being that there was a student looking for a small botanical project. I had what I thought was a minor flash of genius. When grasstree trunks fall apart, they do so into the old leaf bases. These form little wedges, charred at one end, and golden brown for the rest. And this part is covered with a thin layer of hard resin. My hunch was, that as the tree produced new leaves at its apex, this resin would have been soft and sticky, only hardening up later as it aged and was baked in fires. Pollen from the surrounding vegetation could have fallen on the sticky grass-tree apex and stuck-to and been incorporated into the resin. If that was the case – grasstrees might have a several hundred year long pollen record.

The student took it on, and I co-supervised, helping with two main issues – cleaning the old leaf bases to make sure any pollen was from the resin, and getting the pollen out of the resin. And – success! Pollen from a range of bush-land species. Unfortunately the student didn’t see it that way. Because the pollen that was found showed no particular difference from what was growing there now – the project was A Failure. Nothing could convince the student that this was normal science – that it should be written it up as an experiment, the process described, and claim the first-ever pollen from grasstree resin. The student refused point-blank to continue. In the interests of everyone’s sanity, a second ho-hum project was dreamt-up, completed, and the student later went on to become a head of department.

The tip of this grasstree has broken away to show the ring of charred leaf bases. The golden inner parts of the leaf bases are covered in resin – which contains pollen.

The title of Ward’s (2004) paper was “Blackboys Tell an Interesting Story”. It might be that they tell an even more interesting story for those willing to persevere.

Lamont, B. B. and S. Downes (1979). “The longevity, flowering and fire history of the grasstrees Xanthorrhoea preissii and Kingia australis.” Journal of Applied Ecology 16: 893-899.