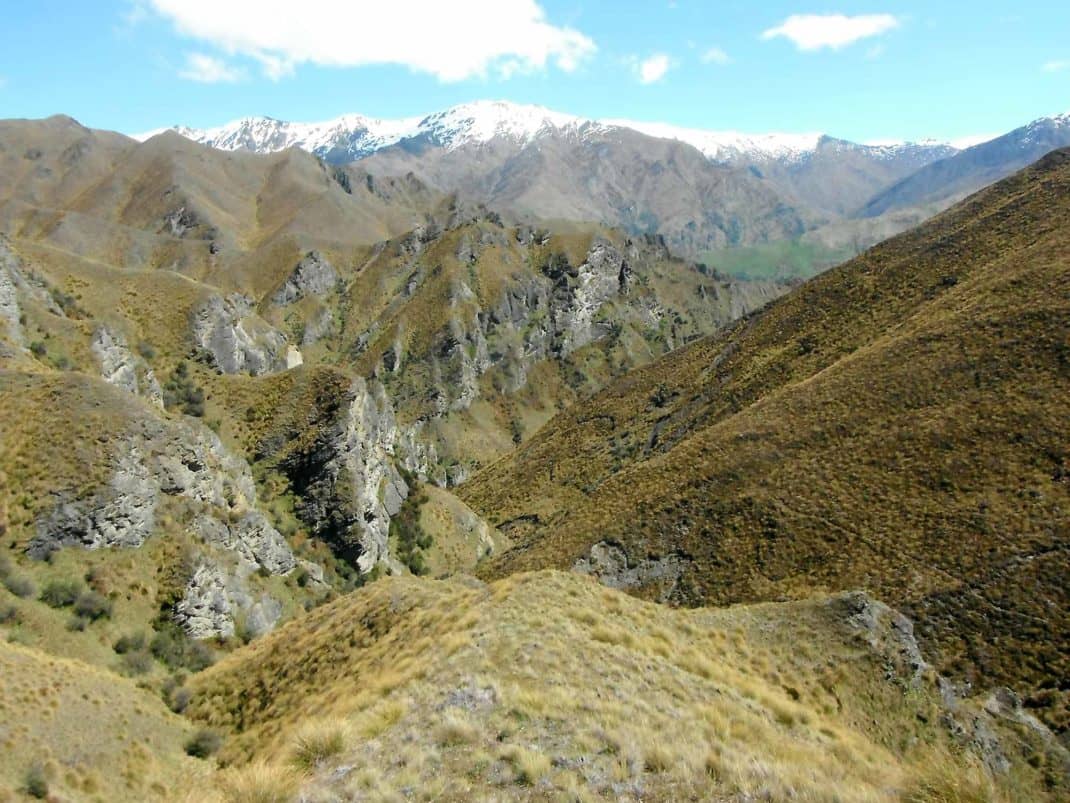 Early on a cool Sunday morning I sipped my latte outside Relishes Cafe, Wanaka, and thought the immediate view could be better. In a somewhat typical urban New Zealand fashion, the lake is cut off from the cafe not just by a road, but a car park as well. However, the awesome view behind it, is of virtually treeless mountains, covered in tussocks, along with some patches of scrub and fern. But below Mt Roy you’ll spot a steep, Y-shaped valley. In its mid-section, if you know where to look, there is a handful of ancient trees. These are beech (Nothofagus) and they are one of the few remains of what was a vast forest. The spot where the trees persist is one of the steepest, and rockiest in the region. These factors have protected them from the fires which annihilated the forest elsewhere.

The view from Relishes Cafe, Wanaka.

We know that before humans arrived in New Zealand, with the exception of mountain tops, wetlands, recent volcanic areas and perhaps the driest spots of Central Otago, forests grew everywhere. This was certainly the case for the wetter, western areas, such as the Otago lakes. The evidence is in the form of fossil pollen, relict trees, old logs – and charcoal (Molloy et al. 1963; Wardle 2001, ab. Fires were rare in pre-human New Zealand, but once they arrived, about 800 years ago, catastrophic fires began to burn – and much of the country was rapidly deforested (McWethy et al., 2009).

In pre-human times forest would have surrounded Lake Wanaka. The lower levels would have been relatively diverse, with common conifers, like matai. Higher forest would have been mostly beech and ended at an abrupt tree line about 1000 m above sea level (this is the level at which average summer temperatures don’t exceed 10 C, Wardle 1965). Above that, just tussock grasslands and some shrubs. The bird life in the forest would have been extraordinary. The usual few birds we typically see in our forests today would have been there in abundance – tuis, bellbirds, pigeons. But also birds which are now rare or restricted, like kiwi, kakapo and takahe. In addition to these, there would have been a variety of birds now entirely extinct – such as moa, and the giant eagle which preyed on them (Worthy 1998).

The Motatapu Track: vegetation it would have passed through c. 1000 years ago (left) and today (right)

I finished my latte at Relishes – and set off on an 80 km walk to Queenstown. This would take me over the Motutapu Track. I wanted to get a sense of scale. And I have a still ill-defined interest in walking between towns. The first part of my walk followed the edge of Lake Wanaka. It was well-used, with cyclists, joggers and walkers, in that order. A couple of kilometres around the lake I saw a fantail sitting in a briar rose bush. It was my first native bush bird. There were two more further down the track. There were extensive native plantings along the track, organised by Te Kakano and Forest and Bird, as well as a truly heroic effort on farmland on the other side of the deer fence.

The track around Lake Wanaka

The track around the lake passes close to (but just out of sight of) a couple of swamps. These are stuffed full of, not just moa bones, but the contents of their gizzards. The pH conditions of the swamp destroyed all of the moa except the bones and the vegetation they ate just before they died. These were important clues as to what moas ate, and what kind of vegetation grew around the swamp several thousand years ago. The forest tree matai figured prominently. These have been so totally eradicated that I know of just two individuals anywhere in the area.

The Motutapu Track was easy going – until it entered a big patch of beech forest. I should have known that forest means steep, fire-protected terrain. All the same, most of the old trees had ancient scars on them, and on a few, these were clearly the result of fire. Even this relict forest had once burned but some how, regrown. On the bird front, I saw one bell bird and one tom tit.

I started cursing the weight of my pack (par for the course on a hike). Up and down, up and down, until my GPS eventually indicated Fern Burn Hut was just an hour away. That turned into two, along with any hopes of doing the next two huts in one day.

The Motutapu Track with Fernburn Hut in the distance.

Next day the Motutapu Track carried on and up through tussock grassland. On a pass with a breath-taking view I met two intrepid French women coming the other way. The pass would have been once of the few places where the track was naturally above the forest in ancient times.

My descent into Highland Ck Hut was steep enough, but worse, I could gaze across the valley in utter horror at what tomorrows walk would involve.

Highland Ck Hut sits in tussock grassland with a few shrubs. This is an ecosystem, or at least the remains of one, that invaded downwards after the forest was burnt. The hut would have been within forest a thousand years ago. Now, save for a few introduced finches and sky larks, the grasslands were devoid of birds. What would the bird life have been a thousand years ago? It probably included the now very rare takahe. These live in tussock grassland today, but possibly also in forest in the past. Some moas are also know to have lived above the tree line.

The Motutapu Track descends towards the Highland Ck Hut

I sat down to read the small there were tramping club books. And did a typically small-country New Zealand thing – skim through to see how many names I knew. Answer: several, but this was trumped by picking up the remains of the only Sunday Star supplement – and finding a photo including my sister.

Given the ruggedness of the next day’s walk, I paid more attention to comments in the visitors book.

“A new definition of steepness” wrote one walker.

“My feet are wider than this track” wrote another.

I went to bed with the lines of a Verve song going through my head: “Imagine the future – I woke up with a scream….”

The climb of the Motutapu Track out of Highland Ck Hut was at least as steep as it looked. Rather like one of those Asian temples, with thousands of steps. Then another steep descent into a tiny stretch of beech forest. I never saw a single bird in that forest, although once through it, I sat down for a cuppa, and a fantail zipped past. This forest patch, like others, was slowly expanding. The outermost trees are clearly smaller than ones deeper in the patch. In their shade are the decaying mounds of tussock that once grew on an open mountain side. Repeating this process, beyond these trees, a few beech saplings have taken root in the tussocks.

The Motutapu Track on the way to Roses Hut with patches of relict beech forest in the distance.

Then it was another long slog up a ridge – where I was attacked by a magpie. On the descent to Roses Hut there are several patches of forest to be seen, but the next morning’s walk to the site of the vanished village of Macetown was exceptionally bleak. Bare schist or tussock in every direction. Then, in utter contrast, the site of Macetown itself – overgrown by trees introduced by the miners. With the leaves bursting out in early spring, It was idyllic. No one there but me, the trees and a few finches. Macetown is the offiicial end of the Motutapu Track. I should have camped but instead, I pushed on down what was now a 4WD road towards Arrowtown and tented there.

The route to Macetown. The Motutapu Track sneaks its way around the bluffs on the left.

From Arrowtown to Queenstown, vegetation gets more complicated. It’s no longer a case of relict forest or grassland. On the way into Arrowtown, I noticed that beech forest imperceptibly seemed to grade into a hybrid mix of beech and introduced maples.

Next day, plodding along the back road to Queenstown, I saw the big areas of ‘wilding pine’ forests that had been poisoned. This seems counterproductive, but for a variety of reasons this is natural reafforestation we don’t want. What will other unmanaged rewilding look like? (yes I know I’m into oxymoron territory there). Large swathes of the hill side were covered with a low hawthorn-elderberry mix, but probably with natives coming up below its canopy. On Ben Lomond, Douglas Fir is likely to regenerate under, and then take over the beech forest (Meurk and Hall, 2006). What will happen here if the country can no longer afford to manage this?

Getting into Queenstown, after four and a half days, I realised my timing was off. It was a quarter to mid-day – dangerously close to my symbolic latte being a crowded one. On the other side of the road there was a school and a group of loud school girls heading vaguely in a parallel direction as me. Surely not? I quickened my pace and the girls branched off somewhere.

Finally Wakatipu – another lake that would have once been surrounded with forest. From the Queenstown waterfront the mountains are bare, but from the airport (and the on the odd Bollywood movie) you can make out a couple of tiny patches of beech forest way up on the flanks of the Remarkables.

Then Starbucks – and a queue, of loud schoolgirls, who knew the quicker route.